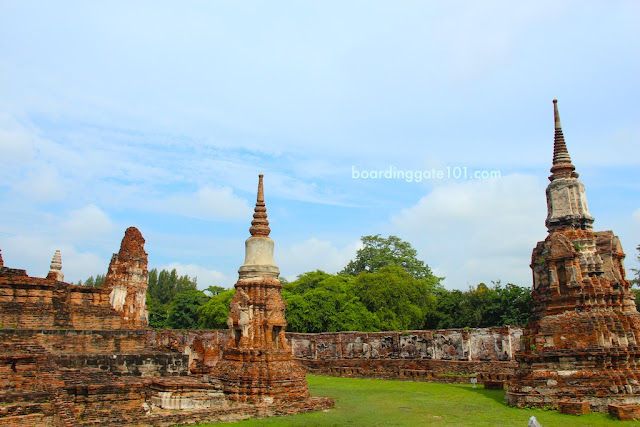 The story of Ayutthaya always fascinated me. The capital city of the kingdom with the same name,  it became one of the largest cities in the world at the height of its power - with a population reaching 1 million in 18th century.


The kingdom, also known as Siam, had several vassal states around mainland Southeast Asia; its conquest was responsible for the destruction of Angkor, the seat of the Khmer empire, in what is now Cambodia, in 14th century.

It was a bit of irony that the same fate befell the kingdom several centuries later. Months of sieges by the Burmese  in 1765 brought the city to its knees; the invaders burned the city and killed practically everyone, including the king.

The degree of the destruction was still visible today. The old city is now a historical park, bearing the scars of war that were punctuated by the crumbling prangs scattered along the complex.

Ayutthaya is about 76 kilometers away from Bangkok. We arrived at the park just before noon, and there were not a lot of visitors yet. Several weeks before we came the complex was flooded due to heavy rains, and we can still see the water pumps siphoning water from the grounds.


The complex, declared a UNESCO World Heritage site in 1981, was a lot bigger than I imagined it to be. We have to take the mini-bus to go from one wat to another. The first site that we visited was Wat Mahathat, in which the most notable feature was a buried head of the Buddha, made of sandstone and covered by the roots of a bodhi tree.


Several prangs, or spires, are already leaning and on the verge of falling down. Several headless statues also dot the red adobe walls of the complex, silent witnesses to the destruction that happened several centuries ago.

After Mahathat we also visited Wat Lokayasutharam, which has a 32-meter long reclining statue of the Buddha, and then Wat Phanan Choeng, on the east bank of Chao Phraya river .  This temple houses a 19-meter high gilded statue of Buddha, called the Luang Pho Tho, dating back to 1334. The statue is revered by the Thais and the Chinese, and is a popular site to visit in the park.


How to get there
By train, take one from Bangkok's Hualampong station to Ayutthaya. By bus, take one originating from Mo Chit bus station. It will take 1-2 hours of travel to get to the park.

Useful Info:
There is a 50 baht park fee for foreigners