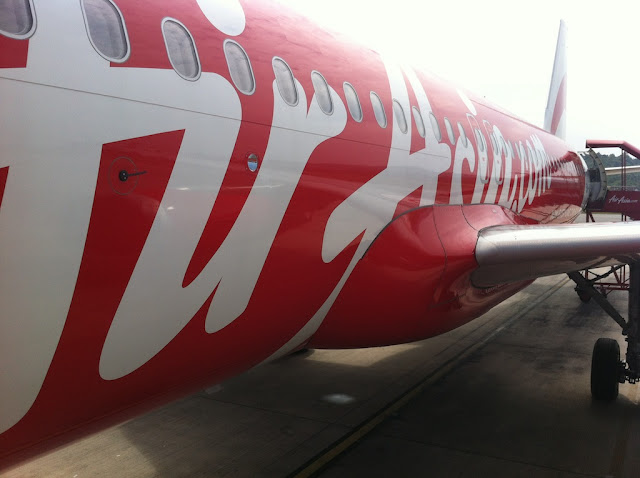 My trip to Langkawi, Malaysia was also my third time to fly using AirAsia, a budget carrier based in Kuala Lumpur. The airline uses the Low Cost Carrier Terminal of the KLIA as its hub for international and domestic flights within Malaysia. Langkawi was my first domestic destination with AirAsia, as previously I've taken it both times going to and from Singapore. 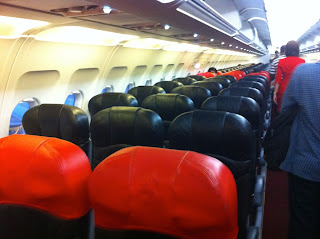 I booked the flights online through their website, and the round-trip ticket to Langkawi from KL set me back around RM250, including fuel surcharges and fees (such as web booking and airport fees). It could have been cheaper had I availed of the seat sale, which I missed by about a week. Payment is done using credit card, although there is also an option top pay using a debit card.

AirAsia recently introduced a frequent flyer program called BIG but I haven't applied for one yet.

Cabin and Amenities
Because it is a low cost carrier, cabin amenities in AirAsia are few. The seats were laid out in 3-3 configuration, in a single-aisle Airbus A320 aircraft. Legroom is a bit cramped  and the seats are upholstered in black and red faux leather. It has a flight magazine named Travel 3Sixty that you can read to ignore the person in front of you who's just reclined his seat and is crushing your knees. 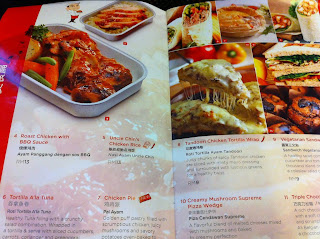 The airline does have food and drinks on board, mostly Malaysian/South Asian cooked fare such as nasi lemak (RM 13), tandoori (RM9) and chicken biryani (RM 13). I've had the cheesecake on my flight back, and it was so-so in quality.

Drinks range from sodas (RM 6) to teas (RM 5 for a cup of Twinnings breakfast tea).

Since Langkawi is a duty-free area, duty-free goods can be bought onboard. They also have merchandise for last minute shopping, such as branded deck of cards, keychains and toys. 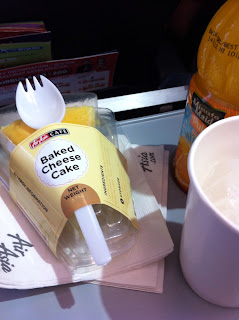 I took the earliest flight - 7:25 am -  to be able to get to the island as soon as I can. Passengers have the option of checking in online, which I did. Upon checking in online you will be prompted to print the boarding passes. You will also have the option to have it sent to you via email and SMS (they will send you the link to a barcode that you can then use at the airport kiosk to scan and print the boarding passes).

There is also an AirAsia iPhone app but I did not have the opportunity to use it for booking or check in.

AirAsia is efficient and prompt with the schedule. Boarding was very quick and the plane did not spend much time sitting on the tarmac before taking off.

Useful info
AirAsia, including its subsidiaries, serves around 400 destinations around Asia. website: airasia.com