As a popular tourist destination, Bangkok has its share of touts and scam artists working hard to bilk unsuspecting tourists of their money (and dignity). On my visit last year we encountered three instances of these scams. 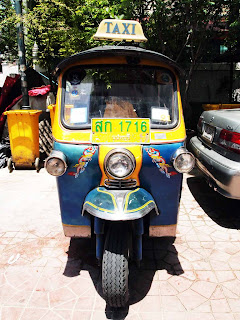 The first one is fairly common - tuktuk drivers who will quote exorbitant rates to ferry passengers to destinations that aren't that far. The best way to deal with them is to just walk away (by which they will immediately lower their price by half).

Another variation for the tuktuk drivers is the opposite - quoting you an outrageously low fare (30 baht for a 30 minute trip? really now). The scam here is that the driver would bring the passenger someplace (like a gem store) that would give them commission for every unsuspecting farang that they bring in. The passengers would them be subjected to high-pressure selling tactics to buy a product, like overpriced gems (which is a scam themselves).

Touts hanging around the temples and touristy places also use this tactic. They would approach a group of tourists (like my group) and introduce themselves as being part of the tourism office or something (they speak English pretty well). They would then ask where they're going. Then they would tell them that the wat is closed or only admits Thai people, but they would recommend another temple, calling a tuktuk driver at the same time. To give them more credence, they would warn you not to pay more than a certain amount. We encountered two touts in different temples making this kind of attempt. We graciously skirted their attempts by telling them that we're going someplace else. 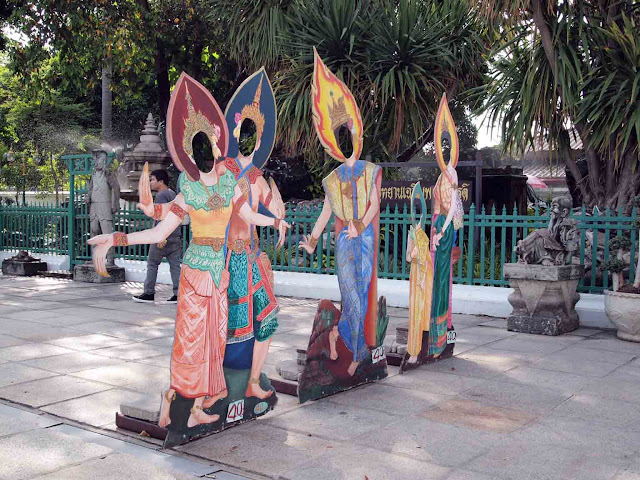 The third one was not exactly not a full-blown scam but still designed to bilk money from unwitting tourists as well. In Wat Arum, there's a painted cutout at the entrance where you can stick your face and have your picture taken. Beware of this as, painted in the bottom inconspicously, is the figure "40", and as soon as you stick your face in the hole, an attendant would be there in an instant asking for 40 baht payment.

There are other scams in Bangkok that are directed towards tourists, such as the sex show scams in Patpong and attempts to entice tourists to drink a drugged softdrink or beer and them robbing them while they're out of their wits. Some bars in Patpong will also bait unsuspecting tourists by offering them a low entrance fee for a show, but giving a different price when the bill comes.

I like Bangkok, and I think this is not a very common occurrence. One way for tourists to continue enjoying the city during the trip is to try to keep their wits at all times. To get more tips on how to recognize scams, this site has an extensive list: http://www.bangkokscams.com/.


If you encounter these scams while in Bangkok, report them to Tourist Police Telephone 1155

pics, from top: a scammer follows his target near the Grand Palace; a tuktuk; the cutout painting in Wat Arum