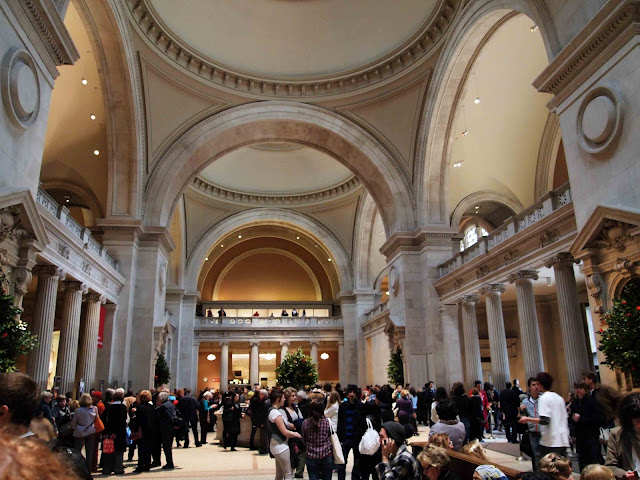 I visited the Metropolitan Museum of Art in New York the second time I was there. The museum, also known as 'The Met,' is located along the Museum Mile in Fifth Avenue, just adjacent to Central Park.


The Met is one of the largest museums in the world, with more than 2 million pieces of art, paintings, sculptures and works from diverse periods of history and locations. It is also the second most visited museum in the world, second only to the Louvre.

As the museum is very large it would be impossible to explore it in just half a day, so I concentrated my explorations to the subjects that I am interested of: Greek and Roman art, medieval art, ancient Egypt, European paintings, and a little of Asian art.

I did see many artworks of artists that any college student who has taken Humanities and history  would be familiar of: Salvador Dali, Claude Monet, Edoard Monet, Edgar Degas, Henri Matisse, Edvard Munch, Georgia O'Keefe, Cezanne, and of course, Vincent van Gogh. I got teary eyed when I realize as I gazed on these works that I've only seen them in books before.

I've also seen sculptures by Rodin, an intact Etruscan chariot, several Egyptian mummies, the rebuilt Temple of Dendur, and the embalming cache of Tutankhamen, several medieval tapestries and religious icons and reliquaries (one of which held relics from Philip the Apostle). There is also an exhibit on Andean art, and a section on African, Asian and the Pacific. The latter includes art from ancient Philippines - a bulul (a rice diety), several grave markers and jewelry from northern part of the archipelago.

Useful Info:
The museum is open from Tuesday to Sunday, from 9:30 am to 5:30pm. Admission for adults is $20. It is best to purchase the tickets online to avoid the queue.

How to get there: if taking the subway, take Line 6 and get off 77th Street and walk to the direction of Central Park.