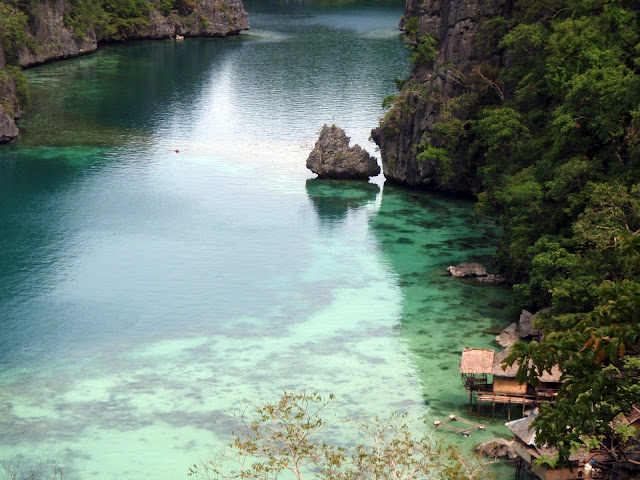 Palawan, a group of islands in the west Philippines, just made it to the Lonely Planet's Best in 2013, earning a number 8 place on the list. As a destination, Palawan is relatively unknown to many backpackers, but that might change now that the guide put it in the spotlight. It is said that Alex Garland got his inspiration when he wrote the novel The Beach from one of the islands he visited in Palawan but that he changed the location to Thailand so that it would remain a secret.

Generally, the destinations in Palawan are grouped into three: Puerto Princesa and environs, including Honda Bay and the underground river, El Nido, and Coron and the Calamianes.

The municipality of Coron is part of the Calamian group of islands north of Palawan. It is about an hour away by plane from Manila via Busuanga. Aside from the azure seas, white beaches and islets fenced with limestone cliffs, Coron has several magnificent wreck diving sites.

From Coron one can also take a boat to go to Calauit, which is a wildlife reserve, and to Culion island, which used to be a leper colony until the early 20th century. The colony is now decommissioned, but the structures were preserved and the island is open to visitors. A museum chronicles the important events and history of the island.

You don't have to go far though to explore a lot of places in Coron. You can hire a boat for a day and the boatman can take you to many interesting places:

Kayangan Lake, which is said to be the cleanest freshwater lake in the Philippines. It is considered a holy place by the native Tagbanuas, which you may encounter as you explore the place.

A few minutes by boat from Kayangan is Barracuda Lake, which got its name to a lone barracuda that got trapped in the lake.

Banol beach is a pocket white beach perched alongside a limestone cliff. It is usually the way point for the people exploring the islands, and it is usually where people prepare lunch and rest.

And if you are into scuba diving and has the proper license, you may also explore the wrecks of the WWII-era Japanese warships that scatter along the bay.

After a day of boating around the island, you may take a trip to Maquinit hot spring to relax and wind down. It is just a tricycle ride from the town. After Maquinit, you can have a beer or two at the Hells Diver bar and trade stories with other backpackers.

How to get there:
Getting to Coron is easier these days. Flights from Manila to Busuanga (then a van from Busuanga to Coron, 150 pesos each way) are serviced by many airlines, including Cebu Pacific, PAL Express, Zest Air, AirAsia and SEAir.

By sea is also an alternative. Ferry operator SuperFerry has a weekly voyage from Manila to Coron, with the voyage taking 12-15 hours each leg.

Where to Stay:
I've been to Coron twice. The first time I stayed in KokosNuss, and the second in Seadive Resort. Both are recommended.

Useful Info:
Travelers are advised to bring anti-mosquito lotions and sprays (and prophylactic anti-malarials), as malaria is endemic to the region. Consult a doctor before taking anti-malarials