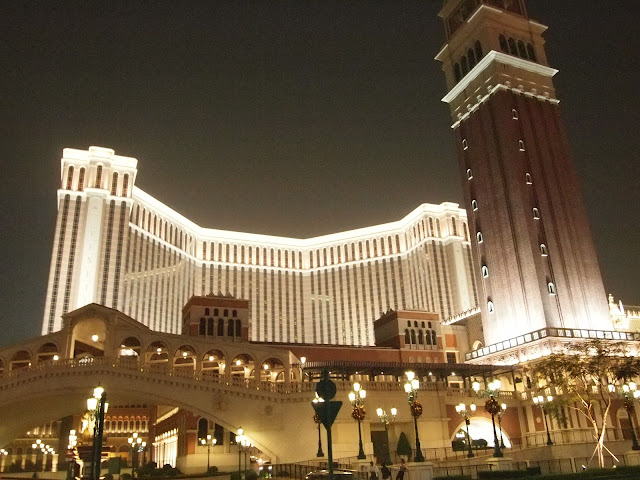 I'm sure that I crossed way beyond flash-packing territory when we booked for a night at the Venetian Macao, because I sure haven't stayed in a hotel as opulent as this. Ever.

The 40-story hotel has its share of superlatives: the largest single-structure hotel in the world,  with 3000 hotel suites and the largest casino. Also, the sixth largest building in the world. Every part of the hotel is over the top: from the decor and the furnishings to the cavernous lobby with painted ceilings, gilded lamps and chandeliers,to the hotel's version of the Grand Canal, with its fully functioning gondolas.


Stores selling luxury brands and restaurants ring the canals, and the ceiling is even painted to look like a blue sky. The arena, the venue of Cirque du Soleil's Zaia, has a 15,000-seating capacity.


And the rooms are simply superlative. Originally we booked on a different room, the 755-sq.ft. Royale suite, but we were upgraded to the Verona suite, for free, because they overbooked.

The new suite is double the size of the Royale, with 1561 sq.ft. in floor area, with all the accouterments of luxury: two queen-size beds, an in-suite bar, a marble bathroom with a tub, two large LCD TVs, and even a couch. Also, unlike the Crowne Plaza Changi Airport, it has free WiFi.


Alas, we did not spend so much time in the room as there are so many things to do in the hotel. There's the casino, for one. And shopping at the Grand Canals (although I only window-shopped most of the time, and most of the shops are so high end). After a quick trip to the Macau Tower, we did catch up a show by Cirque du Soleil (the tickets were included in the accomodation; the Zaia show ended its run last February 2012). After the show we tried the Irish pub McSorley's to grab some grub. The next day after checking out, we took the hotel owned Cotai Jet fast craft back to Hong Kong.