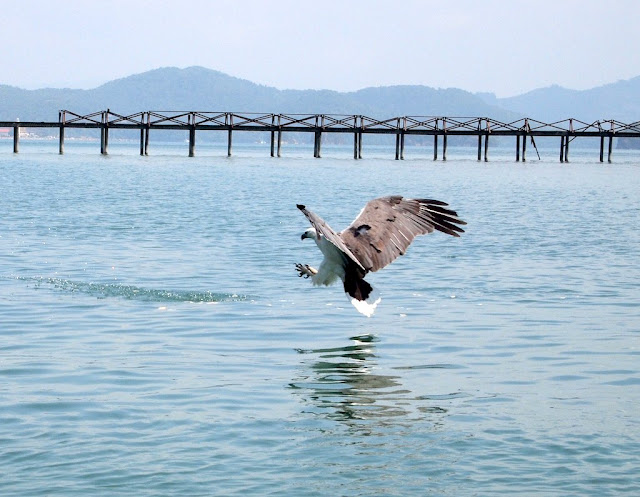 The trip to Langkawi, Malaysia is not the usual backpacking trip, but rather an indulgent getaway of sorts with my friends. We eschewed the backpacker hostels that I normally get billeted in; instead, we booked our rooms at a Sheraton resort (review here). All of our sightseeing activities were arranged through a tour operator too. I was in the island for three days but the tours were done in two, which made those days packed with activities. This post covers the first half of Day 1.

Fresh from a red-eye flight from Manila and spending 6 hours in the Kuala Lumpur budget terminal to wait for my flight, we set out for our first day activities right after breakfast. We were immediately whisked to the pier on a Mercedes-Benz C120 (the tour includes a chauffeured car for a whole day) where we took a boat that would take us around the islands (which number ninety-nine) in Andaman Sea surrounding Langkawi. 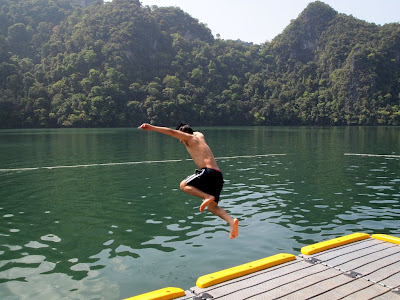 Next stop is the Dayang Bunting marble geoforest park, the main attraction of which are the marauding macaques and the freshwater lake that is accessible by a short hike through a forest. Beside the lake is a wooden platform supported by plastic pontoons that bathers can use to jump into the water. The lake reminded me of Coron's Kayangan, although the latter's water is clearer and cleaner.
+
After admiring the limestone cliffs and karst formations that rise from the aquamarine waters, we took a detour to another island where the sea eagles live. The boatman  threw bucketsful of raw chicken to the water, and one by one the eagles swoop in  to feed on the floating carcasses. It was an impressive sight, and an opportunity to use my camera's sequential shooting mode to capture the graceful creatures dive-bombing for chicken meat. 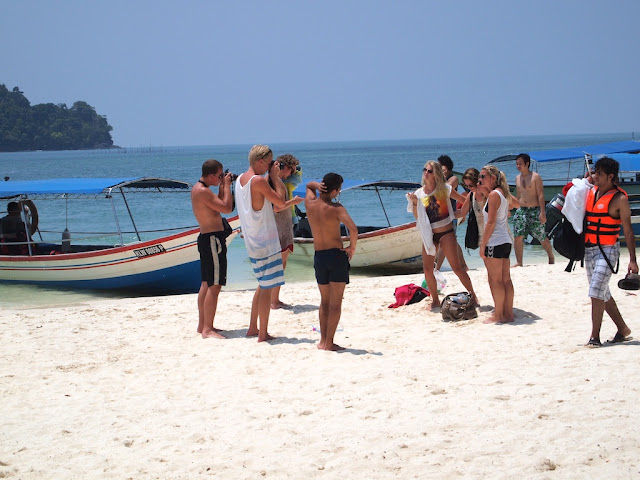 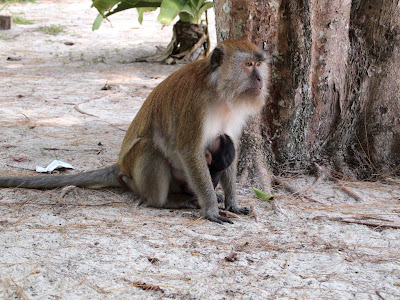 After the eagles got their fill we set out to another island, called Beras Basah. The island, which has a nice white sand beach, is a popular stop, and there were scores of tourists already frolicking on the beach when we arrive. It also has its gang of kleptomaniac macaques roaming around the beach that steal food from unsuspecting tourists. We saw one monkey snatch a can of Coke from a table, ran with it and started quaffing on the soda when he was in a safe distance.

We then spent the next hour lounging around the beach, getting a tan, taking pictures and watching people go about, all the while keeping a wary eye the monkeys to guard against their thieving ways. We were afraid that they might snatch our  bags and ran away with our precious pictures.


A couple of observations: one, we were still able to get 3G signal on our phones while on this island, so we were able to check in on Foursquare while we were on the beach. Second, I didn't realize how conservative of a society Malaysia is until I saw some women bathing in their hijabs. Third, I noticed that the sky was covered by a patina of haze that kind of made it grayish blue.

The whole island is kind of touristy, and I can't help compare it to Coron or Puerto Princesa back home (the latter were better in sights, I think, but the infrastructure of Langkawi is more developed). 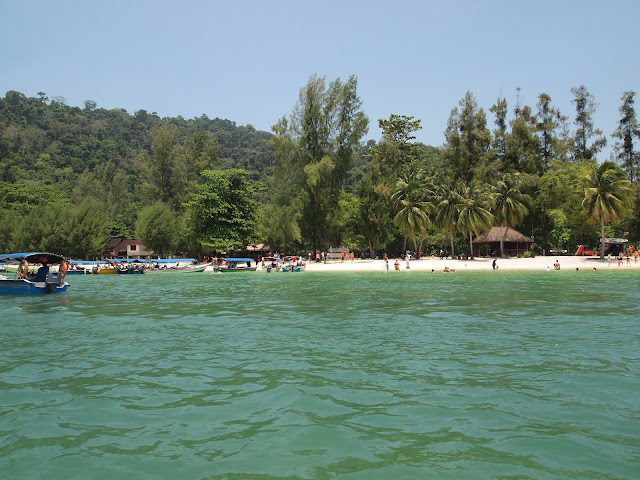 It was well past lunchtime when our boatman signaled to us that we should be heading back to the main island for our lunch and to continue with the tour. Grudgingly we left, taking snapshots of the beach as the boat trudged back.