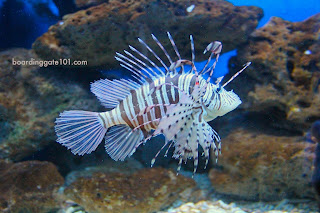 This is my third time to visit the Manila Ocean Park, but it's always fun every time. The park was built in 2008, near Rizal Park in Manila, just behind Quirino Grandstand. It features several attractions, including an oceanarium with 5,000 creatures and 300 species.

Aside from the oceanarium there's a marine animals show involving sea lions, a jellyfish exhibit hall, a glass-bottom boat ride, a "fish spa" where you allow fishes to nibble on your calluses and corns, and a chance to interact with the fishes with a diving system that uses a special helmet akin to an astronaut's, that will enable one to walk inside the aquarium. I usually skip through all these and just go straight to the oceanarium. 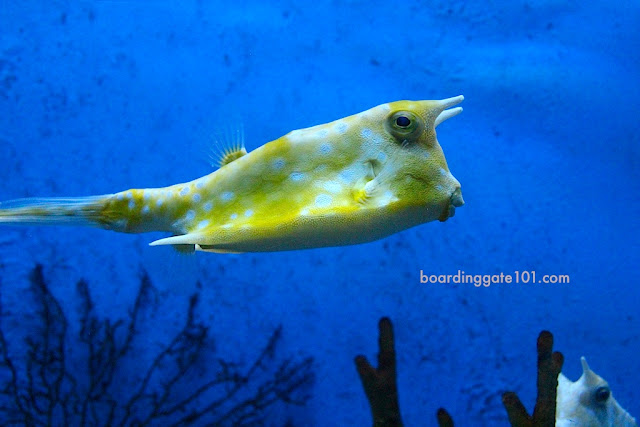 The oceanarium is divided into seven sections: the freshwater and rainforest-themed Agos (flow), with 8 tanks of freshwater fish and crocodile; bahura (reef), with 48 tanks complete with corals; laot (fishing ground), a long tank with plenty of huge fishes; buhay na karagatan (living ocean), the piece de resistance of the park, which features a 25-meter long acrylic tunnel that curves for 220 degrees. Here it feels that you are surrounded by the fishes and manta rays as they swim around the aquarium. 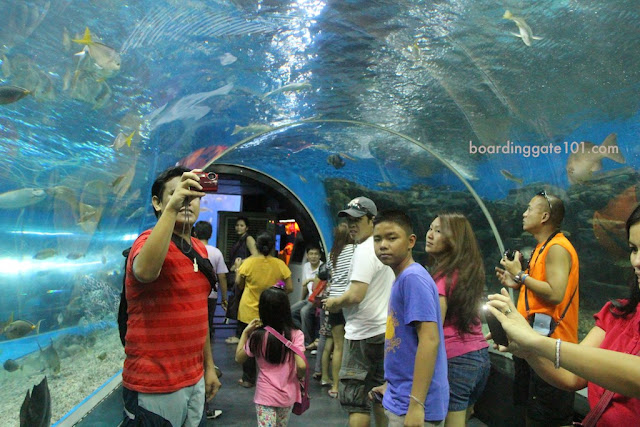 After the tunnel comes the kalaliman (the deep) section, which features deep-water creatures that are found in the Philippines, including barracudas, and rays. Above the atrium and forming some sort of a ceiling is another aquarium that features nothing but pagi (sting rays), which is also the name of the exhibit. The last exhibit is a large tank that features a large number of sharks, mostly leopard, white tip and black tip sharks. It's impressive that they managed to put so many in one aquarium. In contrast I think I've only seen one or two sharks in Bangkok Ocean World. 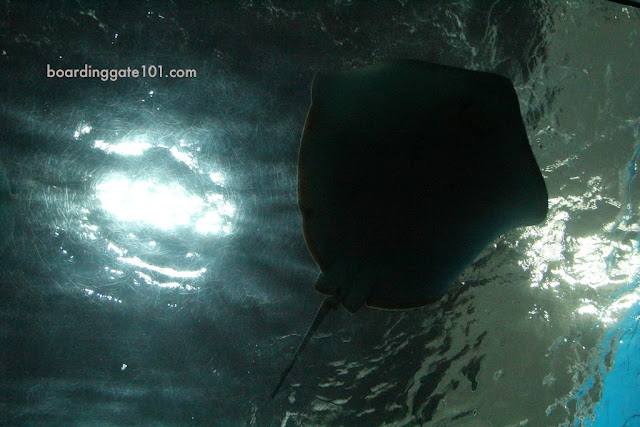 As you exit the oceanarium you'd have a pretty nice view of the Manila Bay. There are restaurants along the exit, which are nice places to catch the famous Manila sunset. The park is open from 10 am to 7pm on Mondays and Tuesdays, 10 am to 8pm from Wednesday to Friday, and from 9am to 8 pm on Saturdays, Sundays and public holidays. Entrance fee to the oceanarium is PhP400 for adults, PhP350 for children up to 4 ft (free for children below 2 ft). It is usually crowded during weekends, especially if there are field trips.

Bring a camera with high ISO; taking pictures of moving fishes on lowlight is tricky.