Architecture of the Basilica of San Sebastian, Manila 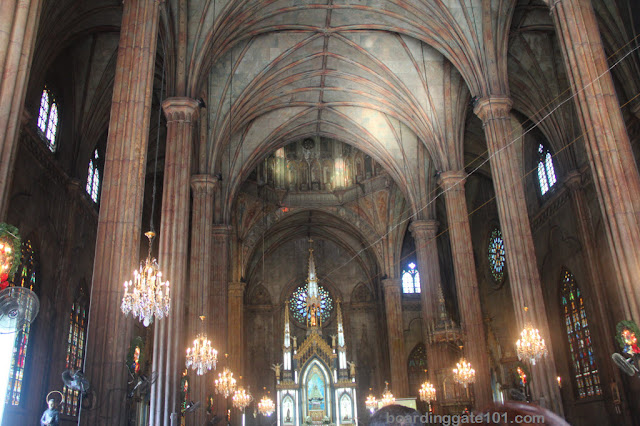 I accompanied a fellow backpacker and friend of mine, Kohei, to the Basilica of San Sebastian in Manila last weekend. It was a chance for me to take photos of the interior and marvel at the architecture of the neo-Gothic church as well. A mass for the feast of the Epiphany was being celebrated while we were there so it was a bit of challenge to take the pictures.


The basilica, which was consecrated in August 1891, was constructed with fabricated steel imported all the way from Belgium. The marker outside the church says that it was designed by Genaro Palacios, but it is said that Gustav Eiffel has contributed to its design.

Done in Gothic revival style, the church was laid out in cruciform plan, with a long nave intersected by a transept. The nave, the central part of the church, has an aisle each on both sides, and stained glass windows depicting biblical scenes adorned the walls.

At the end of the nave is the domed crossing, and the majestic altar, intricately decorated with gilded carvings, located below the twelve-meter high apse.

Rose windows  provided light on both sides of the transept, as well as above the altar and at the opposite, at the entrance of the church. Trompe l'oeil paintings were used to decorate the vaults and walls . [1]

The water fonts, located along the narthex leading to the nave, were made of marble from Romblon.

The church is located in Plaza  del Carmen, in Claro M. Recto Avenue in Manila. It is near Centro Escolar University and the Malacanan Palace. By public transportation it is accessible via jeepneys that passes through Recto, and via LRT 2 (get off Legarda or Recto station and walk to the church from there).