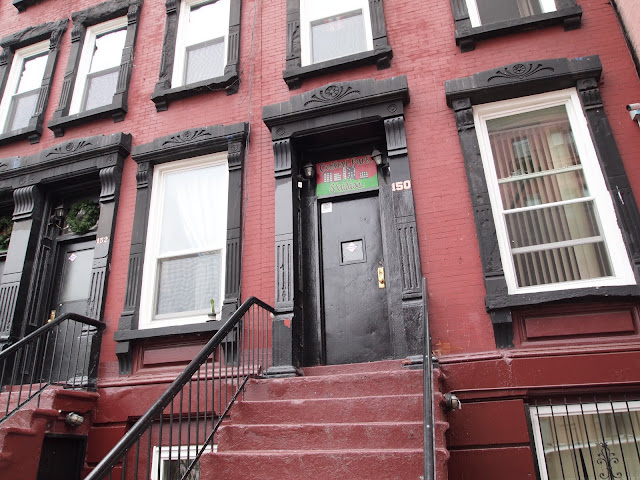 Central Park Studios is where I stayed in New York the first time I went there. I also stayed there again when I came back about a year after. The hostel, in a 3-storey red brick building, is located in East 105th Street. It is also only three blocks away from Central Park, hence the name.

Location
The location is convenient as the hostel is very near the Line 6 subway station at 103rd Street. This is I think is the primary selling point of Central Park Studios. There were also a couple of Mexican and Chinese restaurants and shops I saw on the way there from the subway. In fact, my first meal in New York was actually a Chinese takeout that I got after I checked in after midnight.

The neighborhood around the hostel, which is in east Harlem in Upper Manhattan,  can be a bit grungy, but I did not feel unsafe when I was there. As in anywhere else in the world, travelers should remain vigilant at all times.

The building where the hostel is located is a bit old, with four floors and no elevators, only stairs. The office is a bit difficult to find at first, since it is located at the side of the stairs, especially when arriving at night (which I did).

My room is located at the third floor, and I find it cozy and clean. There were two double-deck beds in the accommodation that I've chosen. The first time I stayed there, my roommate was a chatty European film student whom I suspect was hitting on me. The second time, I shared the room with an Argentinian backpacker who barely spoke except in inaudible grunts, and a sweet Brazilian couple.

Showers and toilet are communal, and so is the kitchen. There were two bathrooms in each floor, and there's even a bathtub in one of them but I only used just the shower.

The main door is a bit tough to open though, as my key got stuck a couple of times. Lockers were also provided, but you have to use your own lock. There is free WiFi, but the signal can be a bit iffy at times. The common area has couches and TV, and backpackers usually would hangout there for a chat, watch the news, or go online, as the WiFi signal is stronger there.

Price
I only booked for a night, choosing a dorm-type accommodation, four to a room, for about $25 a night. In New York, this is relatively cheap.

The Verdict
It's not the best hostel I've been, but I would recommend it. The location was OK, and the staff is friendly and helpful.

Useful info
The address is 150 East 105th Street, near Lexington Avenue. Office hours are from 9.30am-12 midnight. Bookings can be made through hostelworld.com
Central Park Studios lodgings and hostels New York reviews