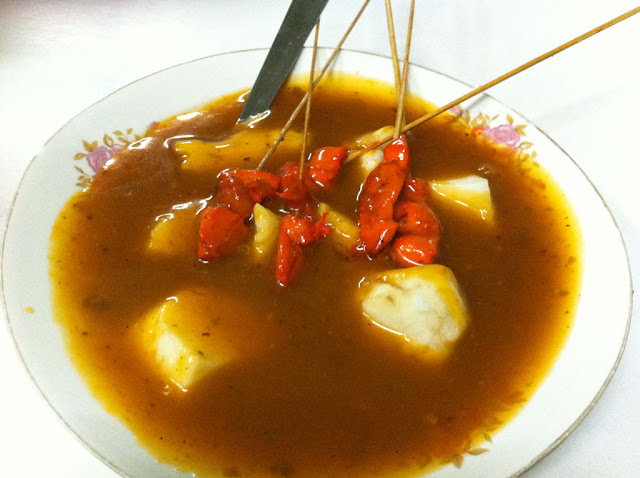 A trip to Zamboanga City is never complete without experiencing the taste of Tausug satti, one of many popular dishes in an array of Zamboanga's unique flavors. Satti is a hit here simply because the taste of this piquant soup is something to perk up one's day. It also has become a ritual here for office workers and students, especially as it becomes a venue for good conversations with a friend or relative and also feels like having a guilt free coffee or cigarette break. Not bad for starters, huh?

Satti is a thick soup served with sticky rice- cooked inside a coconut leaf and paired with several sticks of grilled beef or chicken meat. The taste of grilled beef or chicken gives added flavor to the rest of the meal, and it is addictive because the meat comes in bite sizes. The beef and chicken served are halal, an assurance that the method of slaughtering is humane and follows strict rules that is consistent with universal health standards.

Zamboanga residents, both Muslims and Christians here can't help but agree that satti may have replaced arroz caldo as a comfort food. The rich spicy texture of the soup gives a calming and relaxing feeling and good for colds and coughs.

It may be too spicy at first bite but once you get to finish your first bowl, a craving for another bowl ensues (don't worry, the second bowl is free). This hot soup is perfect for testing your threshold for spice. It is a must try for tourists who wish to have a taste of spice in this charming island. If you want something different that is guaranteed to make your heart beat just a little bit faster without the heartbreak!

The dish is a complete meal .The soup made of different spices such as dulaw (turmeric), sambal,curry, lemon grass, native pepper, red cayenne pepper, garlic, cumin, coriander, chili, onions and salt, pounded together until it becomes a powdery texture. The fine mixture is thickened with constant stirring and mixing of cornstarch. It may also be flavored with fresh tomatoes, soy sauce and peanuts, the taste of which ranges from super hot to sweet depending upon variations. The flavor makes it distinctly a Zamboanga fare that there is nothing really like it except that it is Malay inspired. Our Malaysian brothers will be really proud, how our version of satay has morphed into a popular meal with zest.

If you are feeling just a little bit tired with the typical rice and viand meal, and especially if you are up for something spicy and craving for a dish that will help you to feel more energetic, then this dish is perfect. Some call it the energizer sauce, no wonder it is present even in school canteens around the city.

Usually the satti houses open early in the morning to serve a great tasting meal that is good cure of hang-over (especially if you are coming from a late night out). Early risers and Muslims who pray early also have it at dawn as early breakfast.

The tamis-anghang (sweet-spicy) combination of this dish makes it a uniquely tempting treat especially during rainy season. It can make the body warm and may be an instant natural pick me –up for tired bones and sleepiness. A satti with 3 sticks of meat costs around 15 pesos, meaning if you want more meat you simply have to order for more. A second serving of the soup is usually free. That's why it's a hit for students on a tight budget and because it is affordable, it's a great food to share with friends and not bad to make palibre too.

Similar to Satay of Malaysia, but different

Satay or sate is a dish that is popular in Malaysia. It may have originated in Sumatra or Java, Indonesia but is also popular in other Southeast Asian countries. In the Philippines satti can only be found in the Zambasulta areas - Zamboanga, Sulu and Tawi-tawi islands.


Mon Tan, a Chinese Filipino who has been in the Satti Restaurant business for 15 years says that Satti was reborn in Jolo, Sulu. It is believed that a Tausug (a native tribe of Sulu) who worked in Malaysia brought with him the recipe mainly derived from Satay which consisted of chunks or slices of meat on coconut leaf spine skewers and grilled over charcoal fire. The sauce was made from tomatoes and peanuts.

While the Malaysian version used the tomato and peanut mixture as simply a sauce for dipping the meat for flavor, the Tausug version used the steaming sauce in a more exaggerated fashion and warped it into soup. That's how Satti began but there are many stories really, and this one tops it all. Most Satti cooks do not share their secret recipes and it is hard to perfect the soup's taste into a combination of smooth sweet and spicy blend; people here would rather have them in restaurants, than guess (what the secret is).