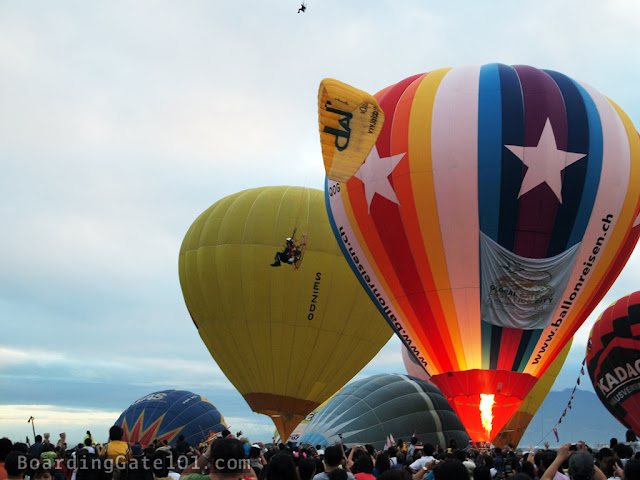 Today is the start of the 18th Philippine International Hot Air Balloon Fiesta. The annual event, which is held at the Omni Aviation Complex at Clark Airport in Pampanga, features aircraft static displays, skydiving exhibitions, ultralights, aircraft flybys and maneuvers, and of course, hot air balloons.

The colorful hot air balloons, which comes in different shapes and sizes, participate in different activities, such as races, "night glows," flights, and being inflated while on the ground for the benefit of the spectators. While these are going on, paragliders would buzz overheard and do some stunts to the delight of the crowds.

Several airline companies and individuals also participate in the static displays. I have seen a trainer (a Dornier Alphajet) in one of the displays, owned by the owner of a local airline. The Philippine Air Force, Army and Navy also display their equipment. So far I've seen a Northrop-Grumman F-5 fighter jet, an Aermacchi S211 trainer, several helicopters and armored vehicles in the displays
I've been to the Clark hot air balloon festival twice, but I will miss it this year because I will be in Boracay in the same weekend it happens. It's a shame really, as I wanted to see the main highlight of this year's show: the Breitling Jet Team, which is the largest civilian acrobatic team in Europe. They fly several Czech Aero L-39 trainer jets, which I am sure would be a sight to see.

How to Get There:
From the North Luzon Expressway, take the Dau exit and head towards Angeles City. Follow the McArthur Highway until you reach the Clark Special Economic Zone.


Useful Info:
Tickets are PhP 250 per person, which can be purchased at the site. The event runs from February 21 to 24.