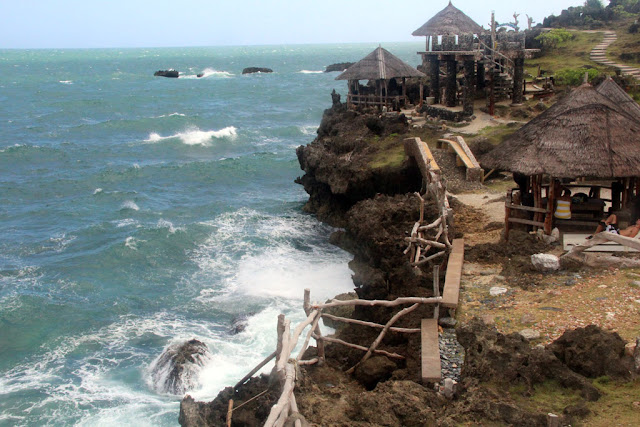 Crystal Cove is a privately-owned park in Laurel Island, one of the stops when you take an island-hopping tour around Boracay, which we did on our third day in the island.

What's unique about the 2-hectare island is that within it are two caves that open to the sides of the island, just below the limestone cliffs. One of the caves can be entered from the middle of the island, through an opening where they built a spiral staircase for accessibility. This cave opens to the sea, and the rushing waves can give you an impromptu shower if you stand close to the opening.

The second cave is larger, accessible through a bamboo stairs built on the side of the cliff. This cave is connected to another smaller cavern through a tunnel that you crawl into. The tunnel leads to cavern that has a natural pool that also opens to the sea. If you're a Type A personality you can wade in the pool, with powerful waves crashing on your face and threatening to wash you away.

Crystal Cove has other things to amuse you when you are done spelunking in the caves . There are several viewing decks scattered around the island where you can view the West Philippine Sea and the surrounding islands.


There are several huts where you can have a picnic, if that's your thing. As you walk along the path going to the other cave, you will pass by the small aviary. There's not a lot of birds in there but what's amazing is that they actually have a monkey-eating eagle (officially known as the Philippine eagle). I'm not sure if it's legal to keep one as a pet, but I reckon that the owner is connected enough to get a license to have one in captivity.

Aside from the Philippine eagle, the aviary has a Philippine serpent eagle, a frigatebird, and a Brahminy kite, which is a hawk endemic to the archipelago. There are also several unusual plants around the island that are worth noting, like the one below.

Crystal Cove is usually included in the island-hopping tours that are being offered in Boracay, even the boatman of paraws can take you there if you wish.

There is an entrance fee to the island if you go there on your own (PhP200), but the fee is included in the island-hopping package.

There is a restaurant in the island, so you can order food and beer if you decide to have a lunch there or have a picnic. Lunch was included in the island-hopping tour, but we ate in a different part of the island.