Narc'd, Stung and Bitten by a Clownfish 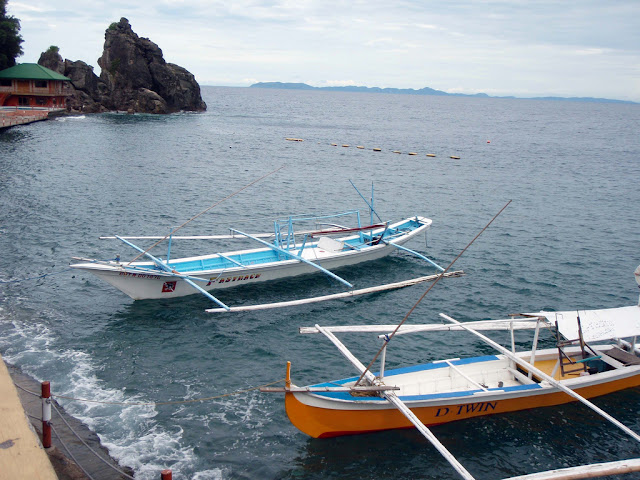 Another old travel story: One of the most memorable dive I did was when I joined the Coastal Cleanup held many moons ago at Outrigger Resort in Anilao, Batangas. The cleanup was done during the first day of the dive, which was on a Saturday. It was during this dive trip that I first experienced being narc'd, got stung by jellyfishes, and bitten by a clownfish.

It was during the first dive, which was a shore entry, and we descended to as deep as 80 feet. James was my buddy during the dive, I was a bit apprehensive during the dive, as I haven't done it in more than 2 months (at that time I was very active scuba diving). when we were at 80ft, the DM signaled that we go to a different direction, but I noticed that James was going deeper and the other way. So I dived deeper to follow him, a bit too fast I think, and I suddenly noticed getting woozy. I was later told that the symptoms I had were that of nitrogen narcosis (the symptoms were discussed to us during classes, so I know something's off).

Nitrogen narcosis is the temporary loss of senses, similar to alcohol intoxication, that occurs while diving [1]. Is also called raptures of the deep or the Martini effect. For about 5 seconds I experienced vertigo and I got dazed, and I started hyperventilating  I made the conscious effort to control my breathing and ascended to about 70 ft, and the narcosis was gone. I think my apprehension, coupled with lack of sleep, plus the too rapid descent, probably contributed to me being narc'd at 80 feet.

Jellyfish stings
On our way up, when we were doing a safety stop at about 20 ft, I felt a sharp pain in my right arm, and when we got back to land, I noticed itchy and painful welts - jellyfish stings (or it may have been fire corals, but I'm not really in agony, so maybe not). I never miss getting these stings, I think I have a natural affinity for them.

Aside from the narc and the stings, the first dive was pretty much uneventful, as we did not enjoy the scenery much, as we were gathering detritus from the bottom of the sea. There was an unofficial contest of who can gather the most garbage, and Anna, who was part of our group, gathered the most garbage than any of us.

At the Steps
The second dive - made after lunch and a short power nap - was more enjoyable. We dove at a site called Steps. The reef is magnificent; there were lots of cabbage-like corals attached to the reef wall, and we saw a sting ray and a humongous cuttlefish. We also saw a wreck of a small boat (just the hull) during this dive. Our max depth is 60 ft, and we stayed underwater for about 40 minutes.

A sort of festivities was held during the night after dinner when we get back to shorr. There was a band and plenty of free beers and pulutan for everyone. Because we are diving again the next day I only had a bottle of San Mig Light and called it a night at 9 pm.

Earthquake
The surface conditions on the second day were rough (Our DM, Mark, said an earthquake occurred somewhere near Puerto Galera, and it was compounded by the effects of the typhoon that was in the vicinity at that time). The first dive was in Cathedral (I've been there before, during my checkout dive), but we went deeper this time: 97ft!

Clownfish Bite
On our way done I got bitten by a clown fish (not so funny, really), and I got a number of cuts and bruises from the corals, as there was a bit of  a current. We saw a very unusual fish - brightly colored with huge fins that resembled wings. We also fed the fishes at the Cross - and I was even able to touch the batfishes - flatlike and as big as serving plates - which are too eager to get morsels of bread that we were handling out.

School of Jacks and a Lion Fish
After an hour of surface interval at a beach, we went back to do our second dive, at a site called Twin Rocks. We saw a school of jacks (talakitok in the vernacular, my Mom cooks them in a simple broth), which is very cool, as they were just there, circling around us like a giant solid silver belt. I also saw a small lion fish which I followed, which caused my DM to frantically signal me not to touch it, as it is poisonous.

We stayed underwater for about 30 minutes, at a max depth of 50 ft. I took a nap after lunch, and we went back to Manila around 3 pm.

How to Get There:
Outrigger Resort is located in Anilao, Batangas. It is about 3-4 hours away from Manila by bus. You may take the Jam Transit bus from Kamuning Station in Quezon City to Batangas City, then take a Mabini/Anilao jeep to Bauan pier.

Note: I can no longer find the underwater pics for this dive; the clowfish photo posted here are from my other dive, just for illustrative purposes only. The photos taken at the surface were during that dive trip though. Some bits of this ancient story are from this post.