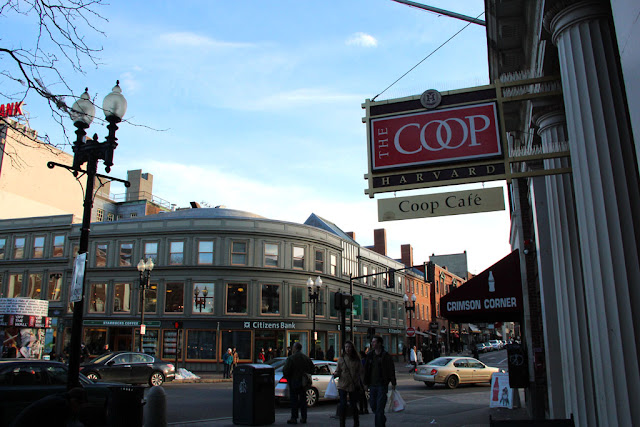 I thought that I love big cities. I enjoyed visiting New York, Shanghai, Hong Kong and of course I stay in one of the biggest metropolises in the world, Manila. But I was absolutely charmed by Cambridge when I visited the city a few weeks ago.

Originally I intended to visit Boston (and just swing by Cambridge as a side trip) to meet my friends Joan and Ian, who are coming in from New Hampshire, but the hotels that we booked were in Cambridge, so we ended up staying there most of the time. It was serendipitous for me, as I did enjoyed the city very much.

There were two institutions that are synonymous to Cambridge, Harvard and Massachusetts Institute of Technology, making the city an academic and intellectual center. It's got a laid-back feel of a university town, with cobbled streets and cafes in every corner. Being a university town, the first places that we explored are of course the universities, Harvard mostly.

Cambridge is known as the city of squares, as its major districts were composed of "squares," the intersections of major streets. One of these is Harvard Square, where the subway station is located, and one of the major commercial area that caters mostly to students of the university. From here you can find the Harvard Bookstore, the Harvard Coop (top photo), several cafes and an iconic news stand called Out of Town News, which sells newspapers from around the world. Harvard Square was also the setting for the dystopian novel Handmaid's Tale, by Margaret Atwoods.


From Harvard Square we proceeded to Harvard Yard, still covered in snow. It is the center of Harvard University. You can find several interesting buildings here, mostly in Renaissance architecture. You can see the student dorms, the University Hall (which is a National Historic Landmark), libraries, and the bronze statue of John Harvard, considered one of the founders of the university. People would touch the left foot of the statue for good luck, which we also did.


We also visited several churches, including the Swedenbord Chapel, constructed in Gothic Revival style, and the Christ Church, where George Washington once worshipped.

We also passed by the Cambridge Common, a public park where Washington gathered his troops during the American Revolution against the British. Before going back to the hotel we stopped by a place called Harvard House of Pizza to get fries and Cokes.


In the evening to the famous Joh Harvard Brewery and Ale House, which is frequented by the locals for its wide array of micro-brewed lagers and stouts. We sampled several beers before retiring back to our hotel to rest for another day of exploring.

Cambridge is connected to Boston via the subway, which is operated by the Massachusetts Bay Transportation Authority. If coming from the South Station or Downtown Crossing take the Red Line subway to Alewife, and get off at the Harvard Station.