Peabody Museum of Archaeology and Ethnology 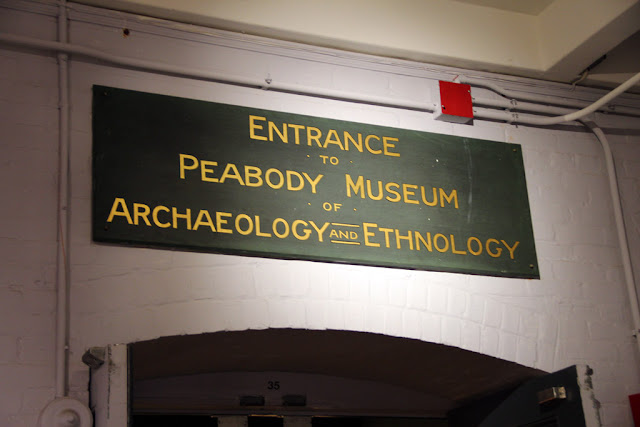 In the same building as the Harvard Museum of Natural History in Cambridge is the Peabody Museum of Archaeology and Ethnology, one of the first and largest museums to focus and  study world's cultures through archaeology, anthropology and osteology. With about 1.5 million items - from Asia, Europe, Oceania, Africa, Central and North America - within its walls, the museum's collection is unmatched in breadth and depth. Indiana Jones would feel at home here.

Coming from the Harvard Natural History Museum, the first exhibit hall that will greet you in Peabody is the collection that encompasses Mayan, Moche, and Aztec civilizations - gathered from numerous expeditions conducted by the museum to several sites in Central America, including Piedas Negras, Copan, and Chichen Itza.


It felt like entering an ancient temple, only that it's cleaner and more sterile looking without the gore and a chanting priestess. Hanged along the walls are textiles and paintings with emblazoned with hieroglyphic inscriptions and images of temple rituals, kings and high priests. Some also depict the daily life of ancient Mesoamerica.

Dominating the hall are the life-sized steles, towering to more than twice a man's height. The steles were excavated from several sites in Honduras. At the middle is the altar, originally found at the central pyramid of Copan, the capital city of the Mayan civilization. I keep on imagining the ritual sacrifices that could have occurred in that altar, and how horrific and morbidly fascinating it would be to witness one.

Representing the agricultural Moche culture of Peru are several murals, and a large selection of intricately formed and painted pottery. One group of ceramic kettles were made to look like heads of deities and kings. These would make  handy conversation starters for Moche afternoon tea, I think.


Also shown are artifacts excavated from the Awatovi ruins, an ancient Native American settlement in Arizona, including murals and examples of pottery.

I was glad to find out that the Philippines is represented in the museum, although it is lumped together with Pacific islands such as Vanuatu, Gilbert Islands and the Carolines, in the Oceania section. Many of the artifacts in the Philippine collection were collected by H. Otley Beyer, the noted anthropologist who founded the Anthropology Department of the University of the Philippines, and others were sent by the American governor-generals when the Philippines were under colonial rule.

The rest of the Oceania exhibit comprises artifacts such as full-size boats, spears, shields and clubs from Australian aborigines, feather capes and helmets from Hawaii, Javanese puppets and Indonesian textiles, Maori wood carvings, statues from Easter Island, and the most bad-ass of all, sharkstooth spears and clubs from Kiribati. Imagine if the Aztecs have these for their ritual sacrifices.

There is also a section in the museum that displays dioramas of village scenes from different cultures, such as a whaling scene in a Nootka village. Nootka is an indigenous people found in the Pacific Northwest coast of Canada

It's quite fascinating that they were able to create such detailed and life-like figures in the dioramas. I thoroughly enjoyed looking at them, as much as I did looking at the Mayan sacrificial altars.

How to Get There
The Peabody Museum of Archaeology and Ethnology is located within the Harvard University campus, at 11 Divinity Avenue, Cambridge, Massachusetts. It is adjacent to the Harvard Natural History Museum.

Useful Info:
The museum is open seven days a week, from 9am to 5pm, except Thanksgiving, Christmas Eve, Christmas day, and New Year. Entrance fee is $12, which includes entry to the Natural History Museum.