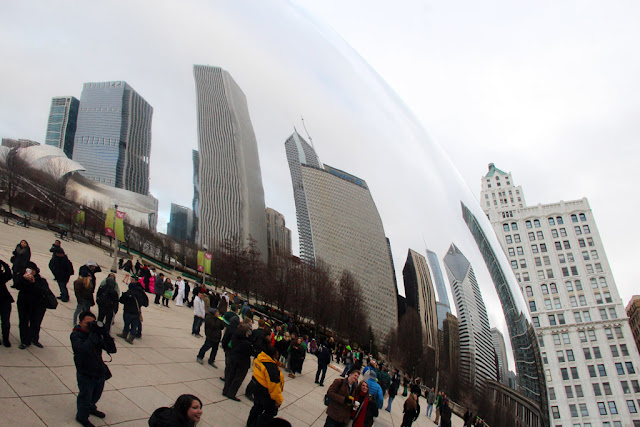 I had a weekend to kill between the two weeks I was in St. Louis for a business trip, so I decided to do Chicago. It was St. Patrick's Day when I flew in but my Delta Airlines flight got delayed in Detroit because the plane I'm in needed to be de-iced, so I missed the parade and the dyeing of Chicago river.

Still I was able to visit Field Museum (it was a toss-up between that, the Art Institute of Chicago, and the Adler Planetarium, but the former won), check out Cloud Gate in Millennium Park, and climb up the Skydeck of Willis Tower. Between these destinations I had also the time to explore the downtown area of the city, called The Loop.

The Loop is basically the center of culture, commerce and government of Chicago. Bounded by the Chicago River on the north and west, Lake Michigan in the east, and Roosevelt Road to the south, the Loop got its name from the elevated railways lines that "loop" around the area. The Loop is accessible to me from my hostel (near University of Chicago/Greek town) via the metro too.

As somebody who lives in a metropolis, I got acclimated to the downtown area right away, using various landmarks - such as the Willis Tower and the Trump International building as navigation aid to get my bearing around the city. I did not explore it right away, as I took a cab straight to the Field Museum from my hostel as soon as I checked in, and the Cloud Gate was my next destination after the museum.


Chicago is know for its architecture and skyscrapers, and the majority of those are found in the Loop. The tallest one is of course, Willis Towers, formerly known as Sears Towers, which until the topping off of One World Trade Center, is the tallest building in the Western hemisphere. I purposely walked from Millennium Park to Willis Tower just so I can explore the Loop area, zigzagging along from one block to another.

The architecture within the Loop is a blend of old and new. Right from the Millennium Park I noticed the juxtaposition between the Beaux Arts architecture of the Public Library and the modern glass facade of the Crain Communications Building. The latter is also known as the Vagina Building, because of the prominent slit in its facade, a counterpoint to the supposedly phallic nature of skyscrapers dominating the skyline of Chicago. [1]. Another unique structure I saw is the Jay Pritzker Pavilion, the opus of architect Frank Gehry. 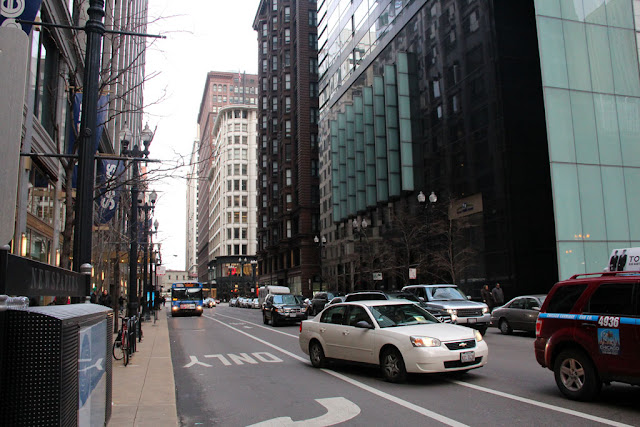 There's also the modern Trump International Tower, the second tallest of the city at 423 meters high, and the Aon Center, the tallest marble-clad building in the world. Another that caught my eye while walking in downtown is the 60-story tall Chase Tower, a Brutalist one but with a facade that is gracefully sloping upward.

Aside from architecture, the Loop is also the center for arts and culture. The Art Institute of Chicago is within the area, as well as the Civic Opera House and the Chicago Theater. Near City Hall you can also see an outdoor sculture of Salvador Dali. 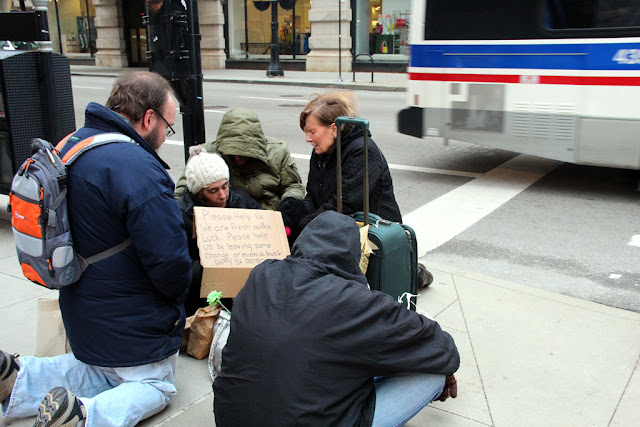 As I was walking along in downtown I got to observe the people in the city going by their business. I passed by a group of people in one corner, praying. I slowed down on purpose so I can hear what they are saying, and I gleaned that they were down on their luck and were invoking the deity for a change of fortune. I moved on, encountering a group of cheery people in top hats, their faces painted in green, probably drunk from merrymaking on St. Patrick's Day.

It was already dark when I came down from the Willis Tower Skydeck. I was a bit famished so the first thing I did was to look for a place to eat. The Loop has many restaurants within it but it was already getting cold (like -1°C cold) so I entered the first restaurant I saw after walking for three blocks. It's a Chinese restaurant, but the crew are mostly Filipinos. I chatted with them with news about home while I was wolfing down on my Szechuan chicken. With my hunger sated, I said goodbye to my new acquaintances, and proceeded to catch a train back to my hostel.