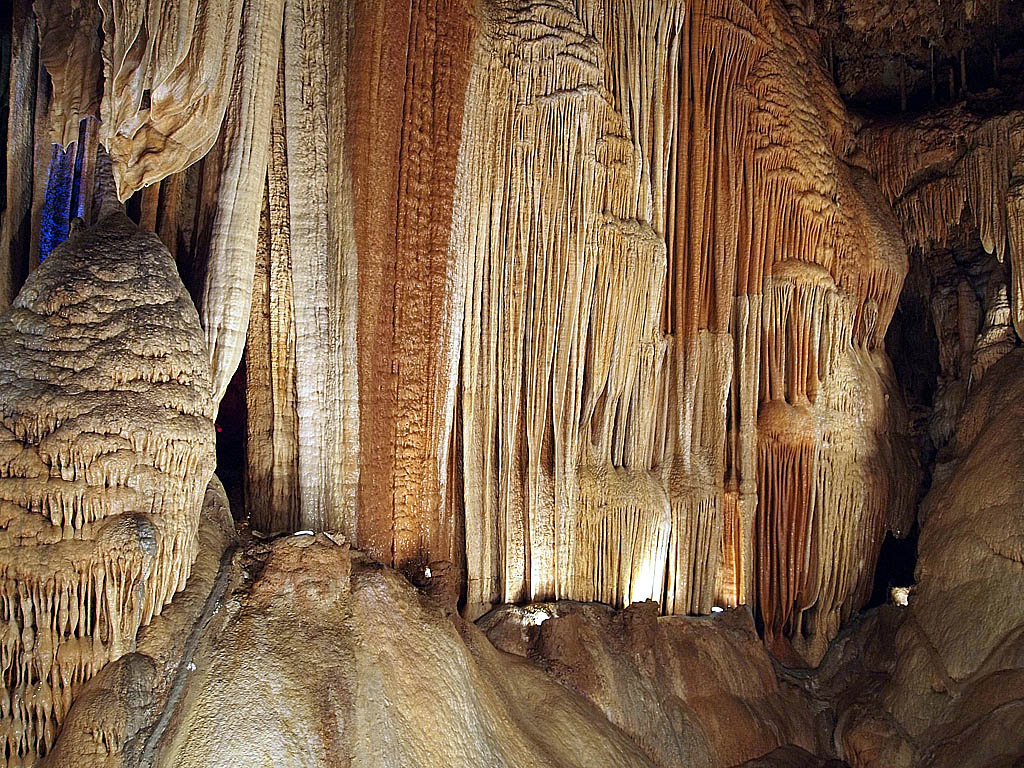 Discovered in 1720 by a French explorer named Philipp Renault and his Osage Indian guide, the Meramec Caverns is the subject of this week's In Pictures.

Meramec Caverns, a cave system that spans for more than seven kilometers, is located in Stanton, Missouri, in the highland region of Ozarks. I visited this in 2010, in my first time in the United States. I was brought there by my manager and his fiance, who drove me there from St. Louis.
What made the cave system unique is the history behind it. Renault, whose party stumbled upon the 50-foot opening of the cave, discovered that the cavern contains a substantial deposit of saltpeter, which is an ingredient in making gunpowder. There was so much saltpeter in it that Renault named the cave as Saltpeter Cave.

Mining in the caves lasted for 144 years, well into the Civil War. The Union Army built a gunpowder factory right inside the caves, which was subsequently destroyed by the Confederate troops. Some guns and ammunition  dug up from inside the cave, are currently on display there now as part of the exhibits.


During the uncertain times brought about by the civil war, an outlaw emerged to become a legendary figure in the Wild West, one that is only seen in cowboy movies. That outlaw was Jesse James, a former Confederate trooper who was wanted for a string of murders, bank and train robberies in the Midwest. James and his gang used the cavern as hideout between their forays of robbing banks and raiding trains. James was later killed by two of his gang members so that they can claim the reward money being offered for the former's head.


Cowboys and outlaws aside, the cavern is impressive in its own right. The owner (the cavern is privately owned) made the effort of putting pathways and lighting inside the cave so it is easier to explore. The temperature inside is somewhat cold, around 15C. I was out of luck because I was wearing just a shirt and a pair of shorts.


The tour around the cavern took about an hour and a half, covering a distance of more than a mile. There were many interesting formations, or speleothems, to see aside from the usual stalactites and stalagmites.


One unique feature of the cave is the Wine Table formation, which is a rare cave structure. The formation is consists of small spheres clumped together like grapes, said to have formed when the cave was underwater millions of years ago. The cave is said to have existed for 400 million years, which made it even more impressive.


The piece de resistance of the tour is the formation called Stage Curtain. Curtains, or draperies, are formations shaped like wavy sheets, overhanging on the wall of the cave. The one in Meramec is about seven stories tall. It is mostly  whitish in color, although there are bands of other colors as well. They actually built a small stage in from of the formation, were visitors can watch a light show.


I enjoyed my time exploring the cave, although I think that I would have been more bad-ass if there were no paths and lights inside it and visitors need to have their wits and Type-T personalities to be able to explore the cave. Still, it was a great experience.

How to Get There
From St. Louis take I-44 west, drive for about 60 miles to Exit 230 (Stanton, MO), then take a left, passing over the railroad tracks and continue for 3 miles.

Useful info
Admission to the cavern tour is $19.50 for adults, $9.75 for children. It is open every day from 9 am, except Thanksgiving and Christmas.

There is gift shop just outside the entrance if you want to get souvenirs. There is also a zip line outside that you can ride to cross the Meramec River.