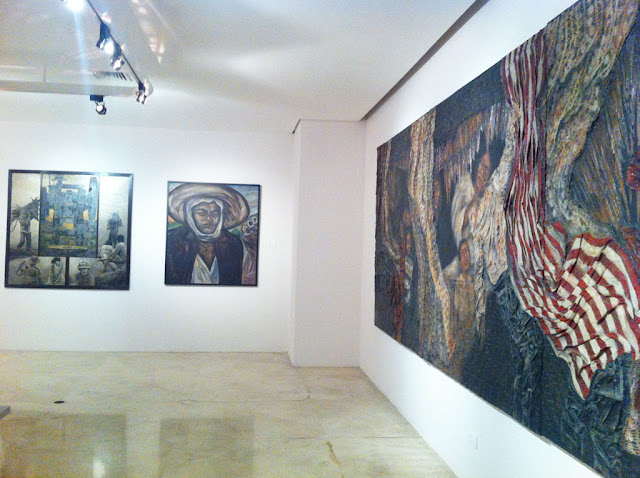 The squat, brutalist building of the Metropolitan Museum of Manila has more resemblance to a fortress than a museum. Located in the Bangko Sentral ng Pilipinas (Central Bank of the Philippines) complex in Roxas Boulevard, the museum's stark appearance seems to contrast the cultural treasures contained inside it.

Meant to showcase Philippine art and culture and conserve important artifacts and artworks, the museum was established in 1976, partly funded by the central bank.

The museum's collection is housed in three floors of galleries, two above ground, and one in the basement. The main gallery is located in the first floor, and it showcases mostly international art and thematically curated exhibits.

The second floor galleries feature contemporary Philippine art. The artworks were grouped into certain periodizations that reflect certain cultural or historical movements in the country. One of the galleries that I liked was the one featuring Filipino masters, such as Botong Francisco, Fernando Amorsolo, and Victorio Edades. It is not as extensive as that of the National Museum, but it has several important pieces as well.

I enjoyed the rest of the contemporary exhibits as well. Not all of the artists featured are known to me, but I did recognized some, surnames like Villalon, Garibay, Lacaba. There were also multimedia installations, one that particularly stood out is the piece by Kidlat Tahimik, featuring boys undergoing a rite of passage.

One of the favorites is the installation by Luis Yee Jr. Entitled Things, it resembled a mass of bugs creeping along the walls and ceilings. The "bugs" themselves were made from dried coconut leaves and seed pods.

Of course the stars of the museum's collection are found in the basement gallery. Maybe because of the collection's importance is the reason why security cameras are everywhere and cameras are generally not allowed in the galleries. I have to resort to some ninja moves - basically furtively using my iPhone to take passable photos that I can use for this blog post.

The religious art featured were made by Filipino artists during the colonial times, with materials ranging from ivory, wood, corals, precious stones and gold. I find the collection here, albeit smaller in number, more impressive than that of the National Museum. There one depicting the Holy Family, made of gold and fine fabric, and a statue of St. Francis of Assisi, made of wood and ivory.

The pottery section displays pre-colonial artifacts excavated in several regions around the Philippines - Batangas, Laguna, Negros Occidental, and Butuan. The Metal Age and Age of Contact pottery, used in the households, in rituals and in burials, showed that pre-colonial Filipinos were skilled in the craft, and the influences from Asian neighbors show that there was already an active international trade within the region.

The most impressive collection is the gold work exhibit. Dated to between 8th to 13th century AD, the gold pieces - rings, necklaces, pendants, diadems, and belts - basically proved that Filipinos had bling even during the ancient times.

The diadems, cut from gold sheets, are very interesting, because they were used to adorn the faces of dead people about to be buried. Ancient Filipinos worship their ancestors, and among the rituals performed involve adorning them with golden face covers.

One of the most eye-popping artifact I saw was the gold kandit, or sash, worn by some ancient sultan. Excavated in Surigao and dated to between 10th to 16th century AD, the sash, made from intricately woven gold thread (it would have taken the artisan at least a year to craft it), weighs more than a kilogram (around 1,057 grams or 33.95 troy ounces). The sultan wearing it would shame a present-day fashionista. Take that, LV.

There was a note on some of the display cases that a number of the the museum's collection were loaned to the Musée du quai Branly in France. I suspect that the pieces loaned there were even more impressive, as this was the first time that the museum conducted a Philippine themed exhibit there.

How to Get There
The Metropolitan Museum of Manila is located with the Bangko Sentral ng Pilipinas complex, in Roxas Boulevard, Manila, just behind Harrison Plaza and across the Cultural Center of the Philippines complex. The nearest mass transportation getting there is the LRT Line 1. Get off Vito Cruz station, then take the CCP jeepney to BSP.

Useful Info
The museum is open Mondays to Saturdays, 10am to 5:30pm. Entrance fee is PhP 100.
Website: www.metmuseum.ph