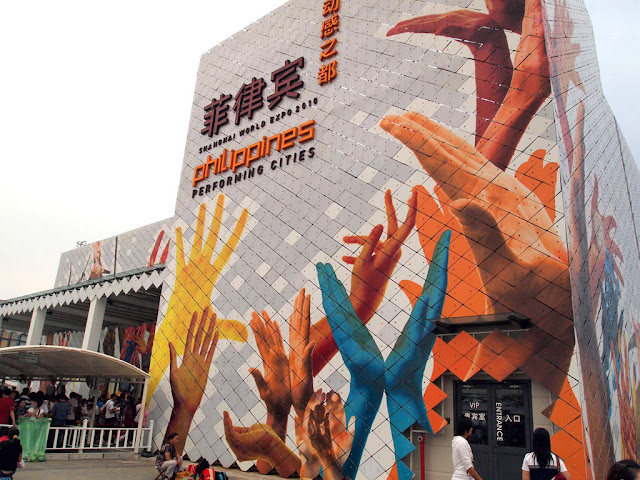 In August 2010 I  went back to Shanghai, China for the second time for the sole purpose of attending the 2010 World Expo. World expositions, which started in 1851 in London, were meant to showcase the host country's technological and industrial prowess. Paris did one in 1861, Chicago in 1893, and St. Louis in 1904. My earliest memory of world expos is the one in Tsukuba, because of the maglev train, the giant Sony Jumbotron and the piano-playing robots that were featured on the news, and that of Seville in 1992. The Shanghai World Expo, was the first one I've been to though.

The Shanghai Expo is one of the largest so far, and is meant to showcase China's ascendance to the world stage (that and the Beijing Olympics). Located in both banks of the Huangpo River, in Pudong and Puxi districts, the expo covered an area of almost 30 square kilometers. It ran from May 1 to November 1, 2010.

The theme of the expo is Better City, Better Life. There were 12 pavilion groups, most in Pudong. A number of countries built pavilions on the site, to showcase the beauty, culture and technology of each. It was like a beauty pageant, with each country trying to outdo each other.

The first zone comprises the Asian and Chinese pavilions. Sandwiched between the first zone and Lupu Bridge is Zone B, which is for Southeast Asian countries. Grouped in Zone C were the European, African and American pavilions. The fourth holds the corporate pavilions and is located in Puxi side.


After being advised that day sessions are mostly packed with visitors, we decided to visit in the evening. Entering the Expo site from the Puxi site, which holds the corporate exhibitors, we took the ferry across the river to the Pudong site.

We then visited various pavilions along the way: Australia, Belarus, Switzerland, New Zealand and the Philippines. We skipped some pavilions, especially the large ones, because of the long lines, which would take 2-3 hours to get through.

We then visited various pavilions along the way: Australia, Belarus, Switzerland, New Zealand and the Philippines. We skipped some pavilions, especially the large ones, because of the long lines, which would take 2-3 hours to get through.

The China pavilion is quite impressive, but we did not get inside too, as it needs a special ticket, and only 50,000 are given every day to the locals, at 9 am in some location in the city. We contented ourselves gawking over it from a distance.

Other national pavilions that I find impressive include Great Britain (called the Seed Cathedral for resembling a dandelion), Spain, Latvia and Thailand. Some have great facade but are disappointing inside, like Switzerland (nothing to see but TV screens with people talking on them). Of course my favorite is the Philippines, for its joie de vivre.

Performing Cities is the theme for the Philippine Pavilion at the 2010 World Expo in Shanghai. Accented by a montage of hands - to emphasize the "human dimension" in urbanization - the pavilion is draped with white diamond-shaped tiles that glow at night. Inside, the pavilion has a fiesta atmosphere, with a menagerie of exhibits, artworks, performances, videos and booths that celebrate the Filipino culture and urbanity.

Visiting the Expo, in China no less, was stressful, . There were about half a million visitors each day in the expo, mostly mainlanders who weren't afraid to jostle, shove and elbow everyone else in the lines and in the sidewalks. The sheer size of the location, moving from one pavilion to another, can give your legs a bit of a workout.

It was, nonetheless, a great experience. After all, world expositions rival the Olympics and the World Cup, as the most attended international event.