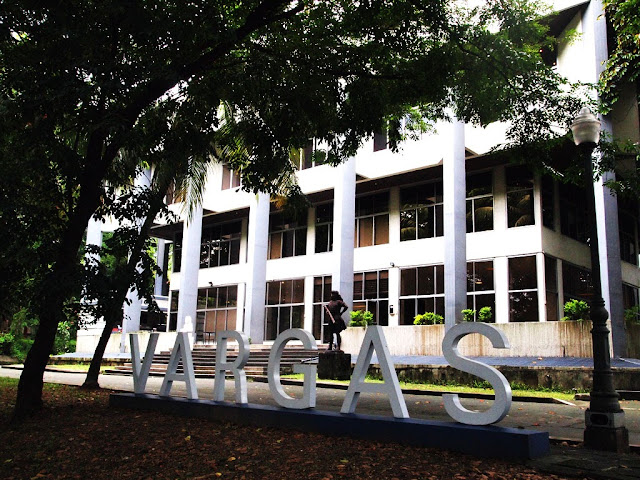 Continuing my series of featuring notable museums in Metro Manila, I visited today one that is actually just near where I live, the Jorge B. Vargas Museum. It is located inside the campus of the University of the Philippines - Diliman.

A big part of the museum's collection was bequeathed by Jorge B. Vargas, who used to serve as the executive secretary of Philippine president Manuel L. Quezon. Vargas, who later became the mayor of Manila when it was declared an open city during the occupation of the Japanese in World War II, donated his art collection, stamps, coins, papers and memorabilia to the university. The collection was later expanded, which now has the largest collection of Philippine masters outside of the National Museum.

I met up with my friend +Nyel O'yek  when I went there. It was a great experience having her with me because she, as an art studies graduate of the university, was discussing with me the period, technique, and genre of the artworks that we were viewing. She even knows some of the contemporary artists whose art were currently there, and even the curator of the museum (who was her prof apparently).

We started our exploration at the third floor galleries, which house the contemporary arts gallery, and the personal collection of Jorge Vargas.

The second floor gallery is where the bulk of the important artworks are housed, grouped thematically and by period. Here you can see lots of masterpieces by Fernando Amorsolo, Victorio Edades, Juan Luna, and other Filipino masters from late 19th century to mid-20th century. Many of the paintings date between 1930s up to the 50s, with mostly bucolic, pastoral and countryside themes. There were also several that show dark themes, such as the destruction brought by the war. There were several nudes as well.

The gallery at the lobby and at the west wing ground floor was hosting the installations of Patricia Perez Eustaquio when we visited. The project is entitled The Future that Was, and the blurb describes it, in a typical artsy-fartsy manner, as an exploration to the notion of "appearance," and the aspect of postura in  the "design-effect in social life," using mannequins, woven rattan, and pyramid-shaped paintings. If somebody speaks to me that way I'd crease my forehead, nod slowly and quickly change the subject to Gloria Estefan's hair.

How to Get There
The Jorge B. Vargas Museum is located along the University Circle, inside the Diliman campus of the University of the Philippines. Take any jeepney that goes inside the campus, and ask the driver to drop you at the museum. It is located near the Quezon Hall, where the Oblation statue is located.

Useful Info
Admission is free for UP students and alumni, but the museum charges a PhP 30 entrance fee for the rest. Photography is allowed on some galleries, so there is no need to do ninja moves like I did in the Met Museum of Manila.