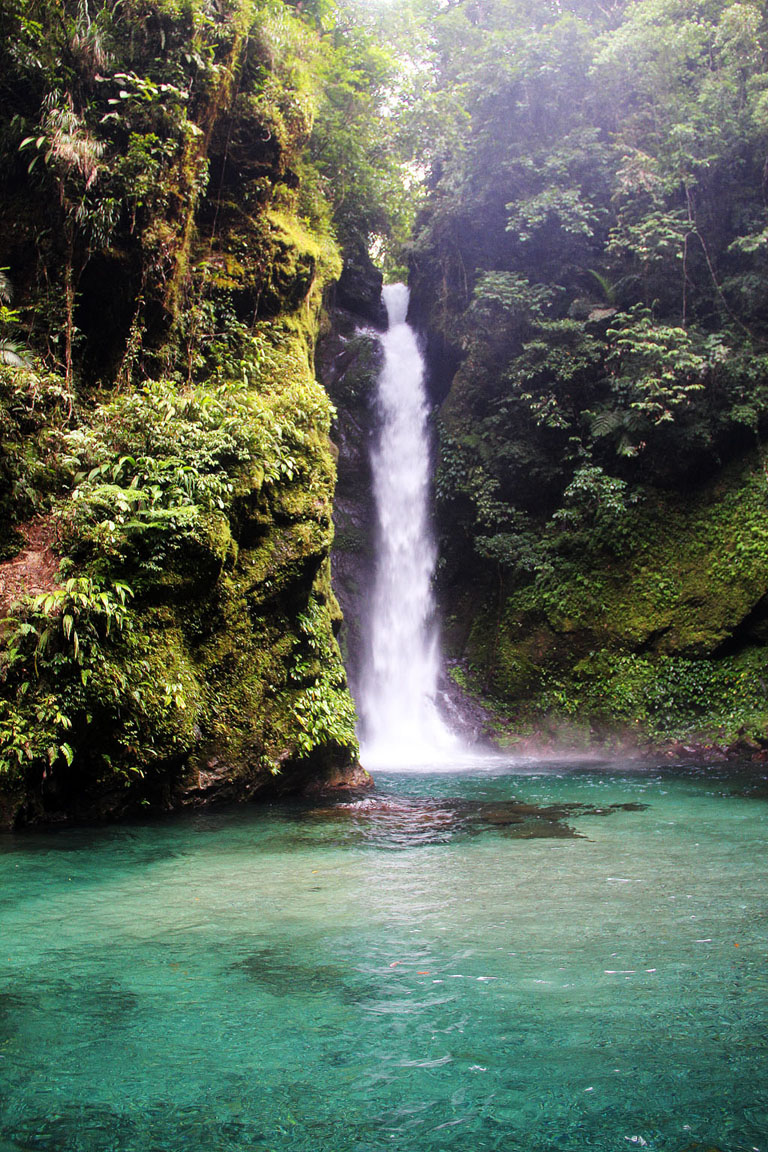 The ride from Baler going to Ditumabo, a small village of San Luis, Aurora, was not easy. The road was rough and unpaved, with small boulders seemingly strewn over it, testing the suspension system of the two tricycle cabs that we (the same people whom I went surfing in Baler with) hired to take us to the village.

Much of the four-kilometer trip was also uphill, making the engines cry out as our drivers, Anthony and Carlo, struggled to stabilize the vehicles as we trudge along. Our destination was a waterfall called Ditumabo Falls, also known as Mother Falls.

After arriving at the village we set out to  "twenty-minute" hike, crossing several footbridges made of bamboo and driftwood, across streams and through footpaths carved on hills. The 20-minute hike easily went to almost an hour.

The clear, cool waters of the stream that we forged gave hints of what were in store for us. On several occasions I was tempted to just take off my shirt and take a dip in the stream, but I resisted, as I wanted to reach the waterfall while there's still light.

We did stop once in a while to catch our breath and to take pictures of the stream and the small waterfalls that we encounter along the way.

Taking pictures while crossing the stream was a bit tricky. I was worried about splashing water on my camera, which was precariously slung on my shoulders as I gingerly maneuvered between slippery rocks. I slipped once or twice, and Aroma even managed to mangle her flip-flops, forcing her to walk barefoot along the moss-covered rocks.

The path to Mother Falls is easy to follow though, as there was a penstock built alongside it. The penstock brings water from the main waterfall to a small hydroelectric plant built in the village.

We did not see a lot of settlements or houses along the way, although we did pass a small house with an old lady on it who collected a 10 pesos fee from anyone who crossed using the rickety bamboo bridge. It kind of remind me of that scene in Robin Hood where Little John was insisting that Robin pay him for crossing a small bridge.

Our group was joined by a group of European girls about two-thirds on the way. This is the point where the penstock was already built right beside the stream, and there was a walkway built on top of the penstock. After a few minutes we saw the weir - a concrete barrier designed to regulate the flow of the water - built at the mouth of the waterfalls. The weir and the intake served as a platform where visitors can then view the waterfalls. And what a view it was.

Now sweating because of the long "twenty-minute" hike, we didn't waste much time before dipping into the ice-cold water beneath the falls, swimming and frolicking likes ducks on a pond. I tried swimming all the way to the base of the falls but the dropping water was too strong. I contented myself by perching on a rock jutting out of the water near the base, signaling to Sigrid to snap a photo of me doing my signature pose.

How to Get There
Ditumabo Falls is located in Barangay (village) Ditumabo, in the town of San Luis, about 30 minutes from downtown Baler. A tricycle or a van is the best way to get there. The driver is usually the guide to the falls too.