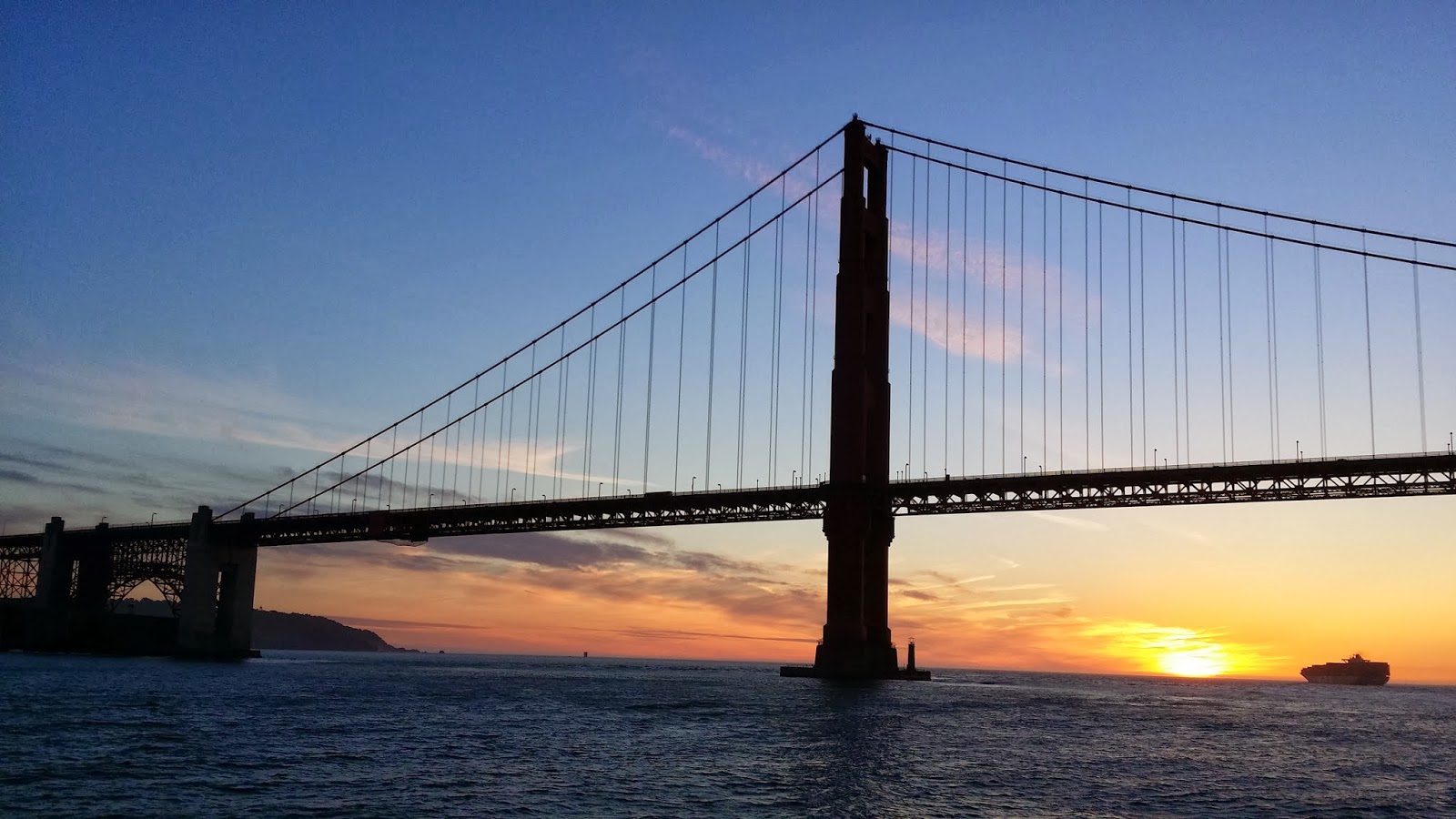 Continuing my live blog of my trip to California and Mexico. You may also follow me on Instagram for more photos of the trip. 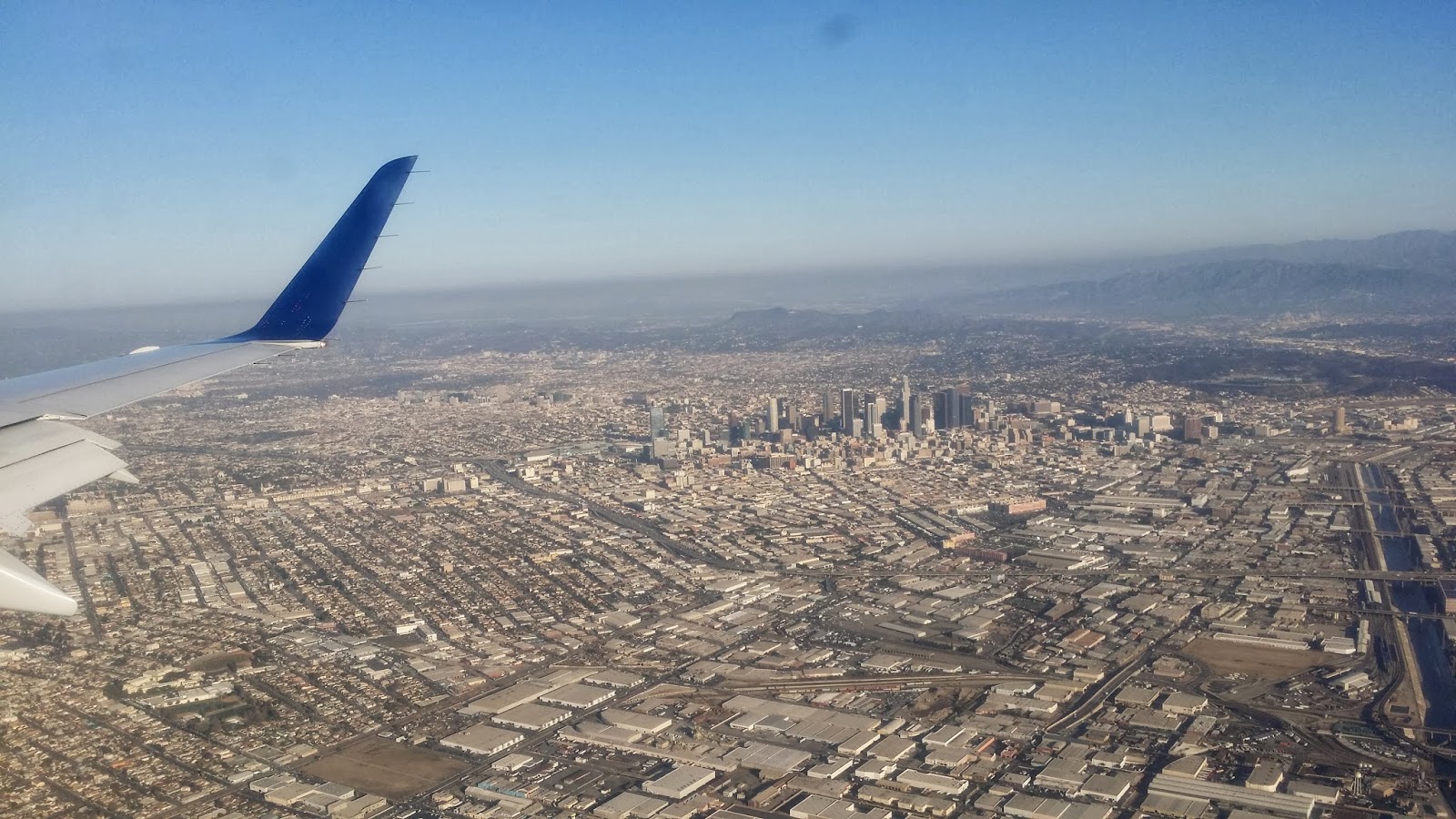 8:05 am PST, Los Angeles International Airport
We just landed a few minutes ago. Took a photo of the LA skyline just before we did. 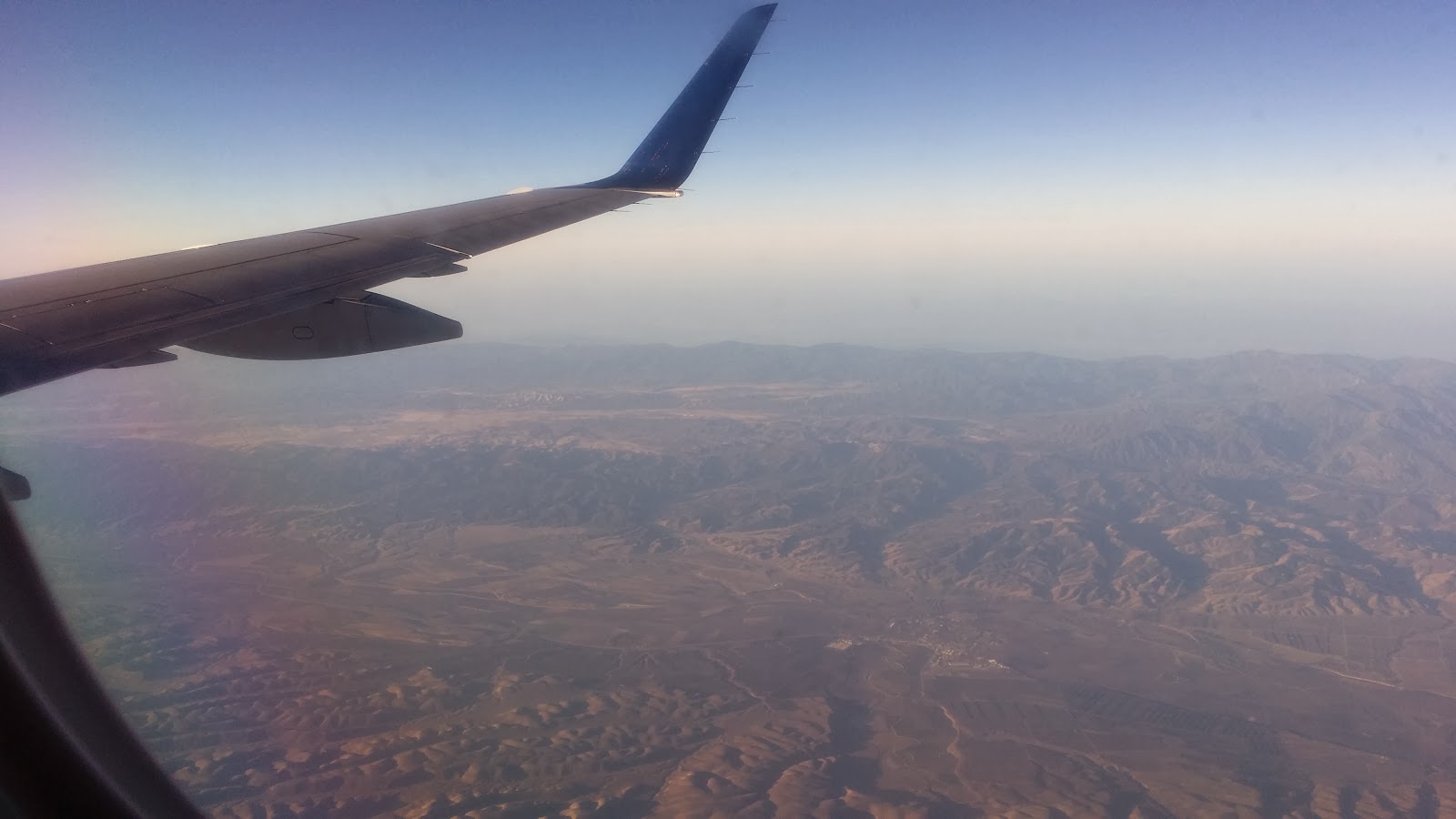 They are serving breakfast too, and just in time as I am hungry now. 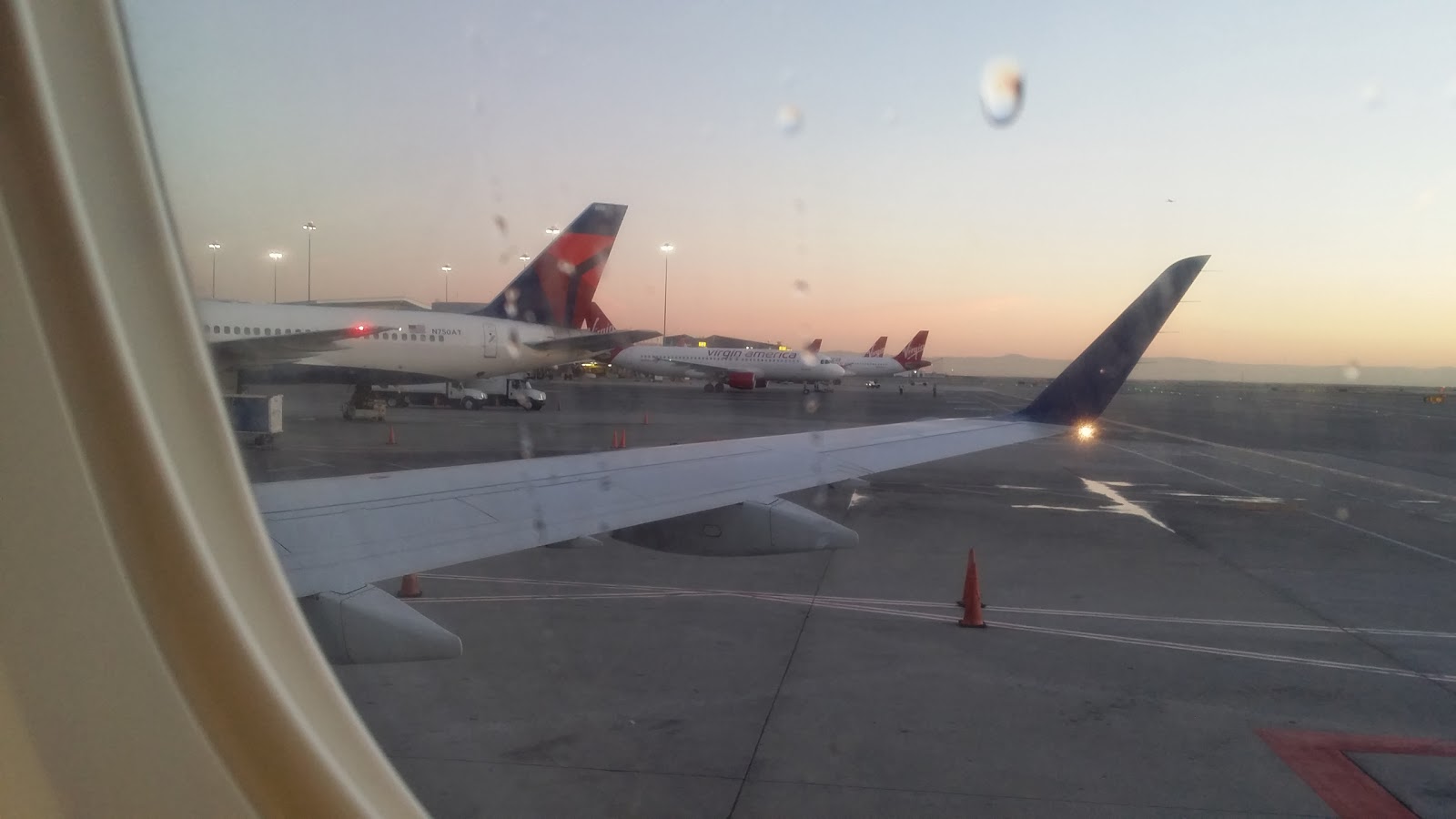 6:45 am aboard Delta 5831
Boarded now, just waiting for the aircraft to take off. We'll be flying on an Embraer E175 jet. It's a small aircraft, only 2-2 configuration in coach. 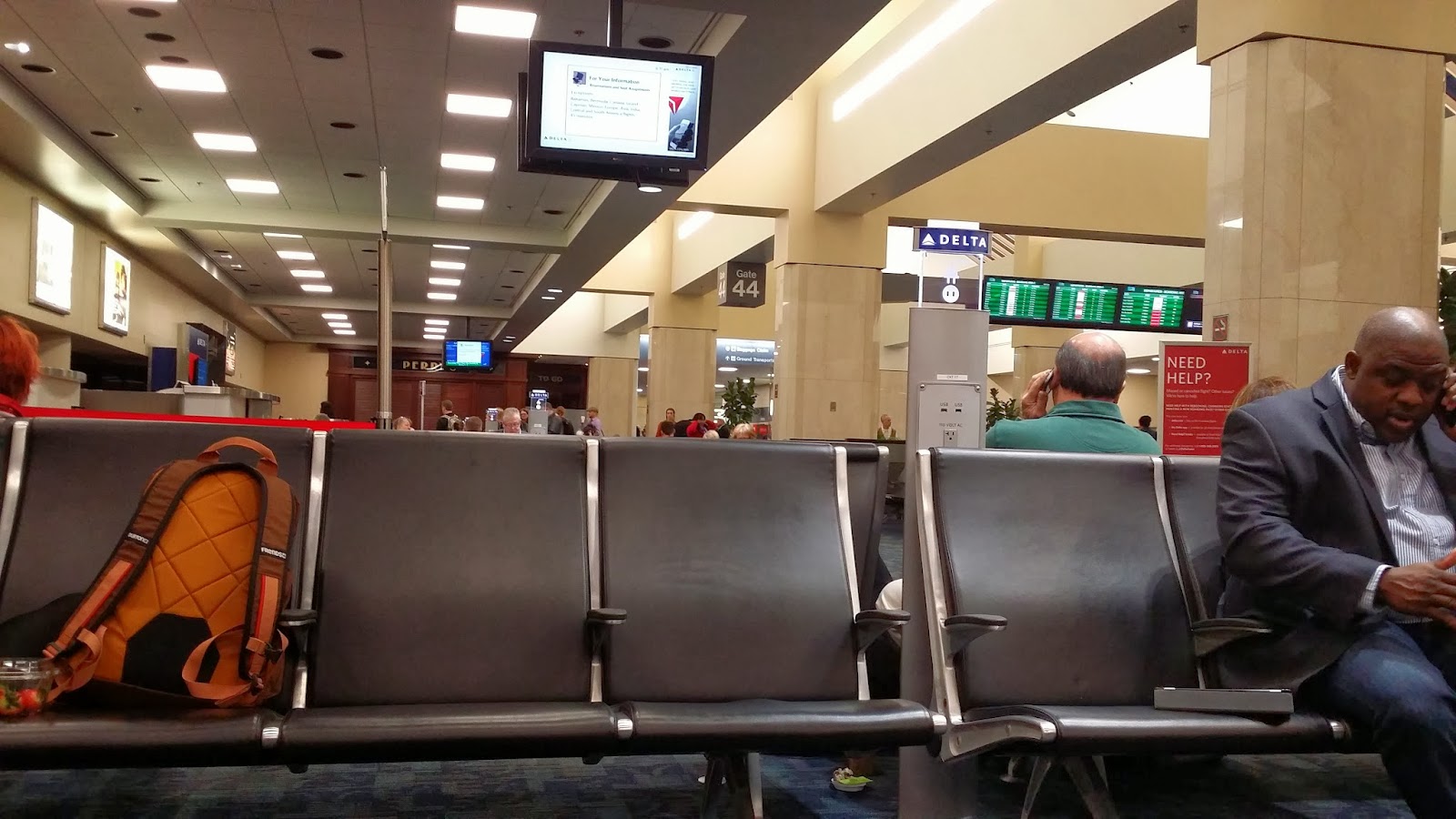 6:14 am PST, Gate 48 Terminal 1, San Francisco International Airport
Got through the TSA checks (and a full body scanner). Now waiting for boarding for the flight to Los Angeles. 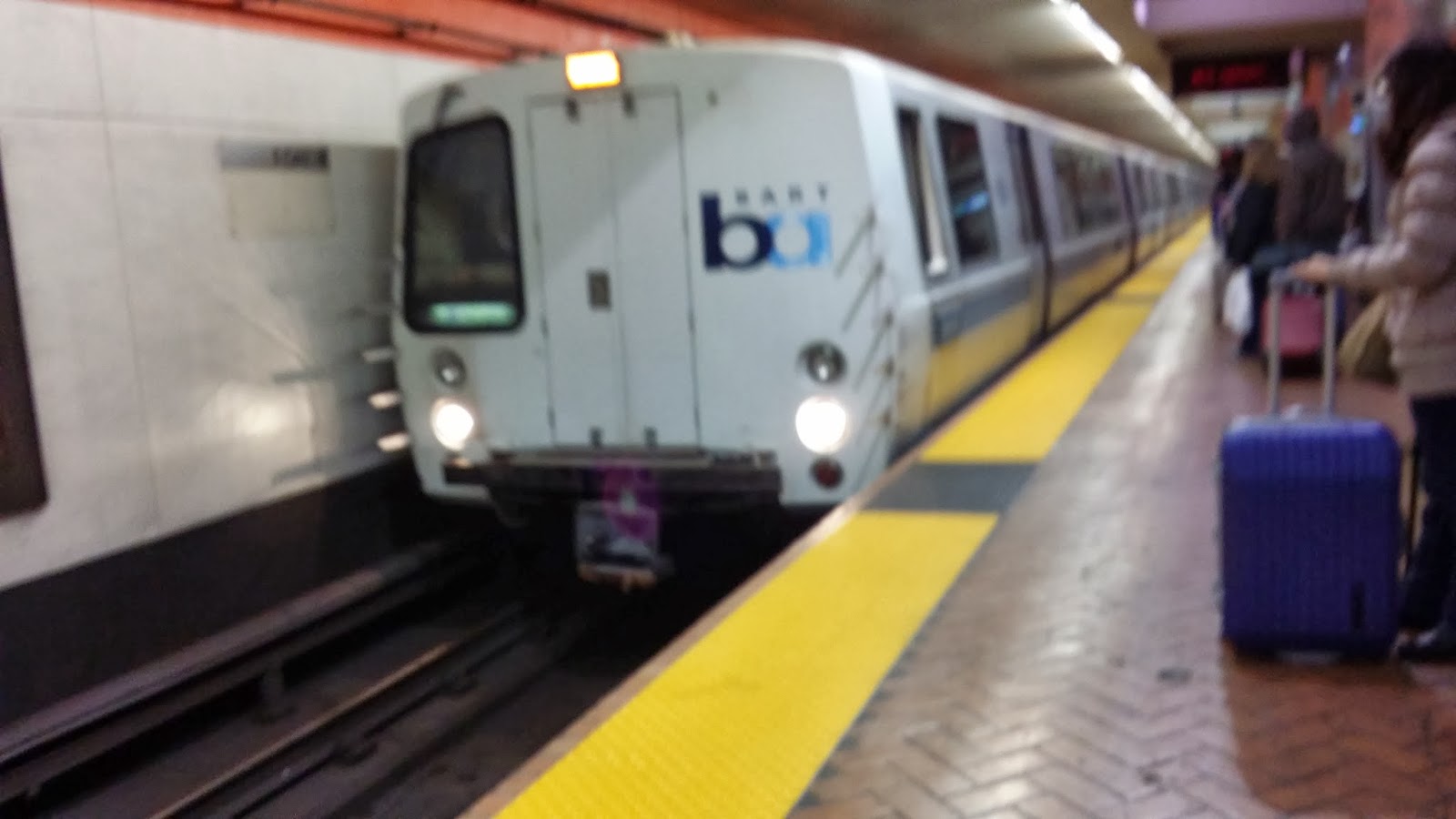 4:39 am PST, Powell St. BART Station
Waiting for the BART train to arrive that will take me to San Francisco International Airport.

1:30 am PST, 02-21-2014, SF International Hostel
After the cruise I got so sleepy (probably because of the beer and that my body clock is still out of whack) so I just took a tram and went back to the hostel.

I slept until around 1 am when I was woken by a commotion outside. Turned out it's just young Eastern European woman in  her underwear and her male friend clad only in skivvies talking loudly in the hallway. (Last night at 3am my drunk roommate from Colorado woke me up because he locked himself out in the bathroom. But I bet stranger things have happened in backpacker hostels).

I was hungry and thirsty so I went out around the block to buy some grub. I notice a lot of streetwalkers hanging around corners and homeless people in benches trying to stay warm. One tried to ask for a quarter.

I'm back in the hostel now eating my Carl's Jr burger and chatting up with my roommate. He can't remember what happened to him last night.

I may need to leave by 4:45 am for the airport to catch my flight to LA. 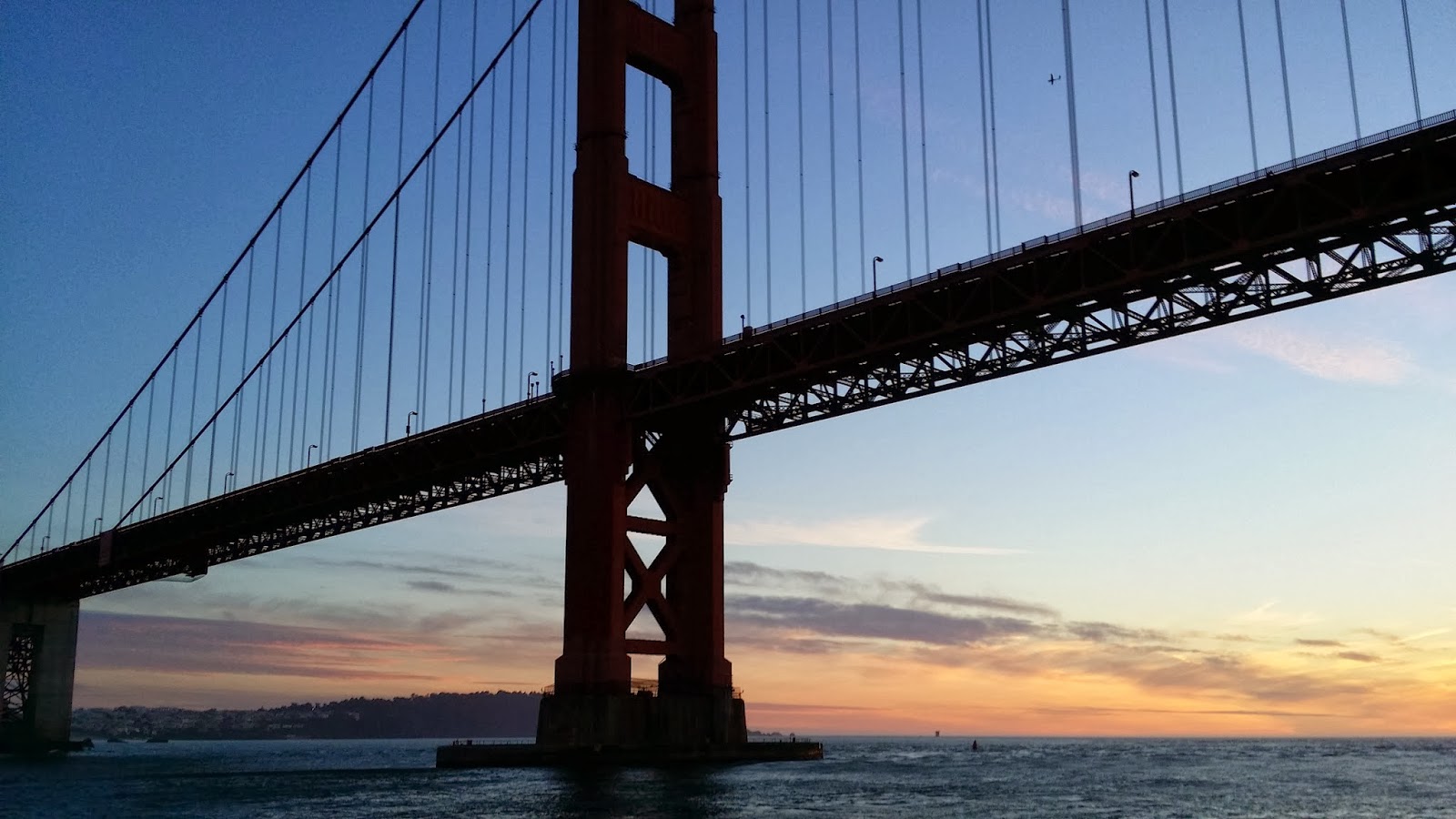 5:50 pm PST, aboard the Red & White boat
After sailing for few minutes we passed under the Golden Gate Bridge just as the sunset colored the horizon in reddish glow. Spectacular doesn't even begin to describe it. 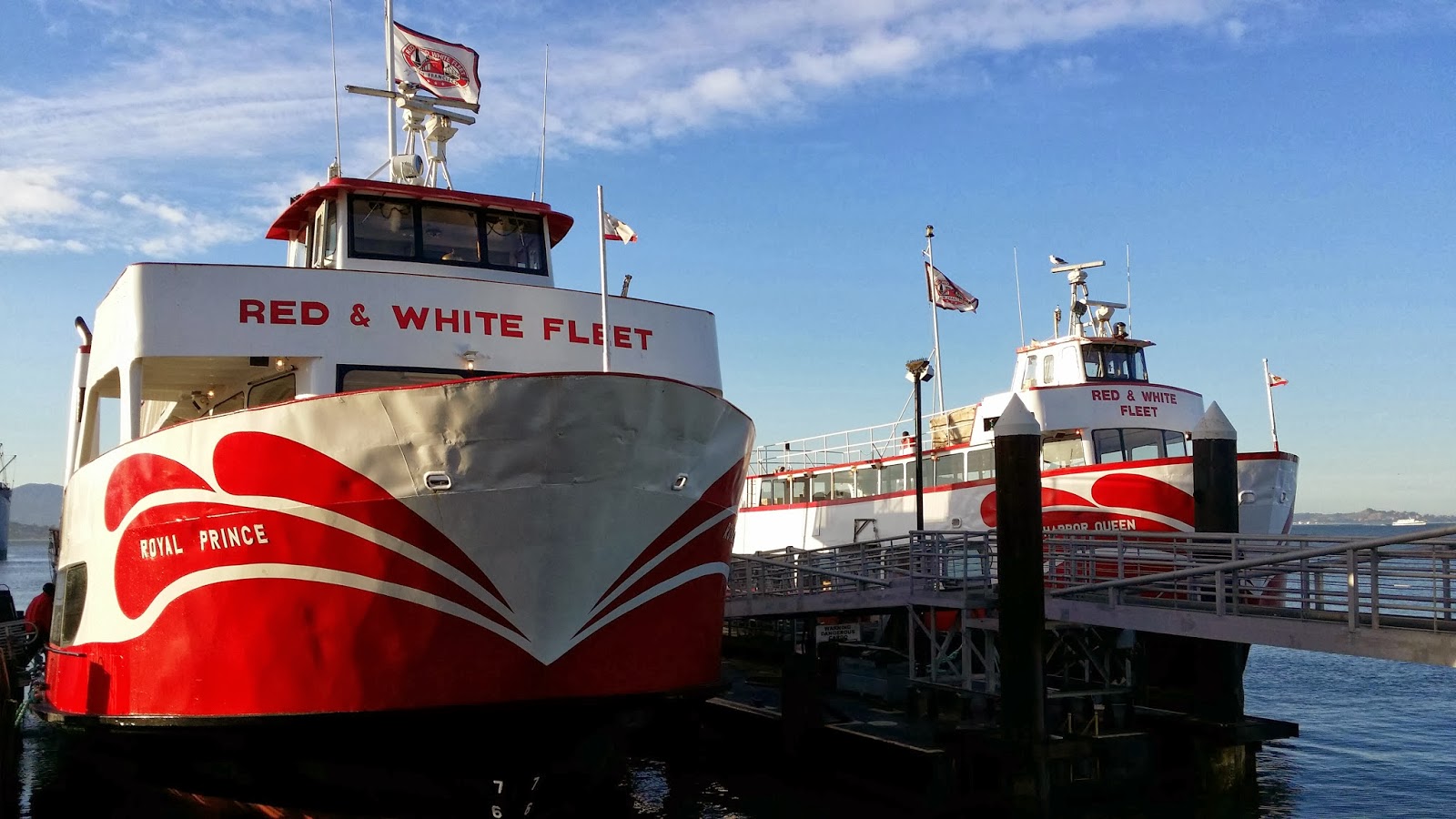 5:17 pm PST, Pier 43 1/2, Fisherman's Wharf
I took the cable car again to the Wharf, and I signed up for a twilight cruise around the Bay. Supposedly the  boat will go around Alcatraz and under the Golden Gate Bridge. There will be dinner too.


The boat will leave in about ten minutes. 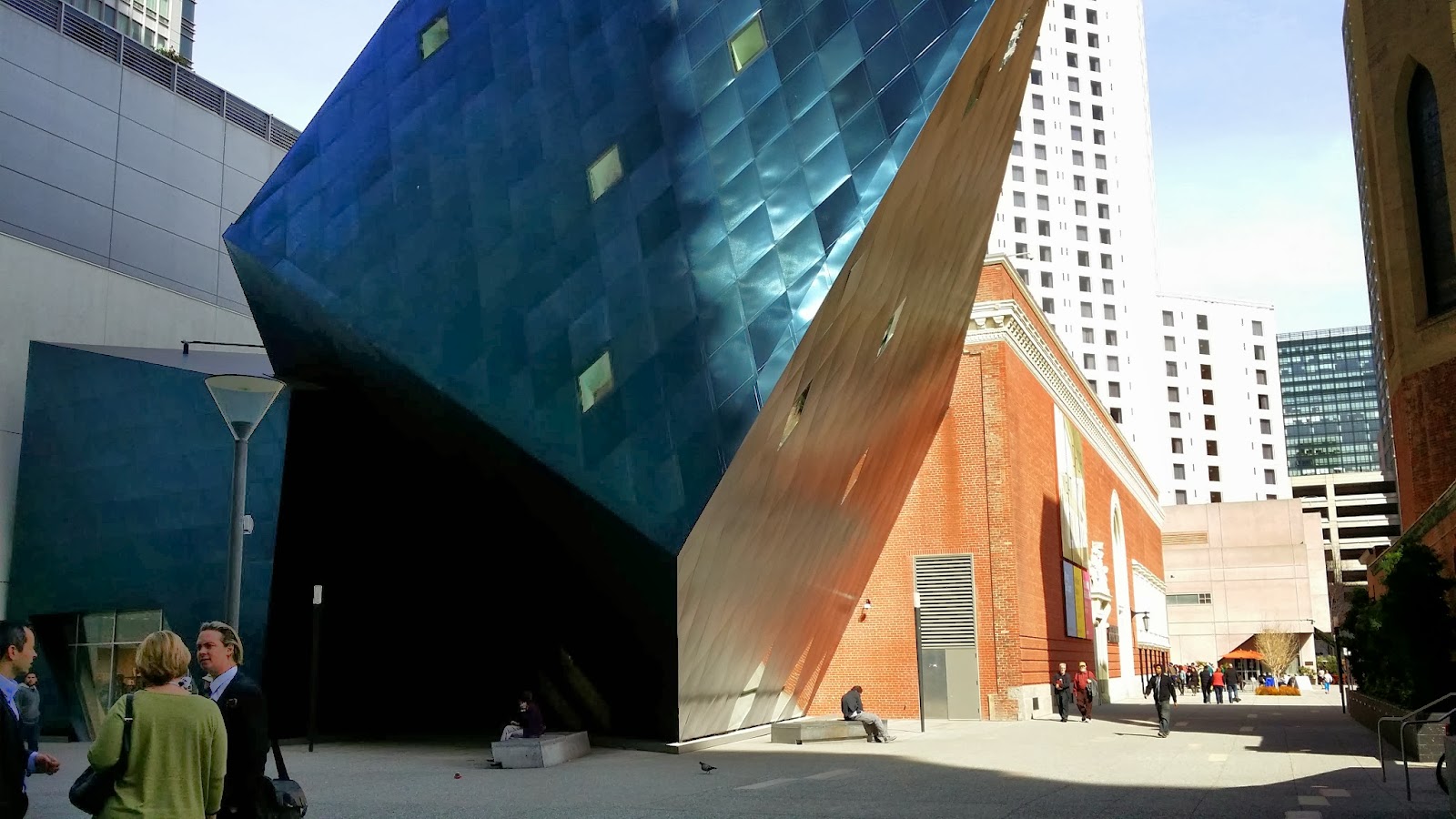 The building housing the museum was designed by architect Daniel Libeskind. I will have a more in depth post about this when I get back.

After the museum I went back to the hostel to recharge, both me and the mobile. Maybe later in the afternoon I will take the hop on bus around the city. 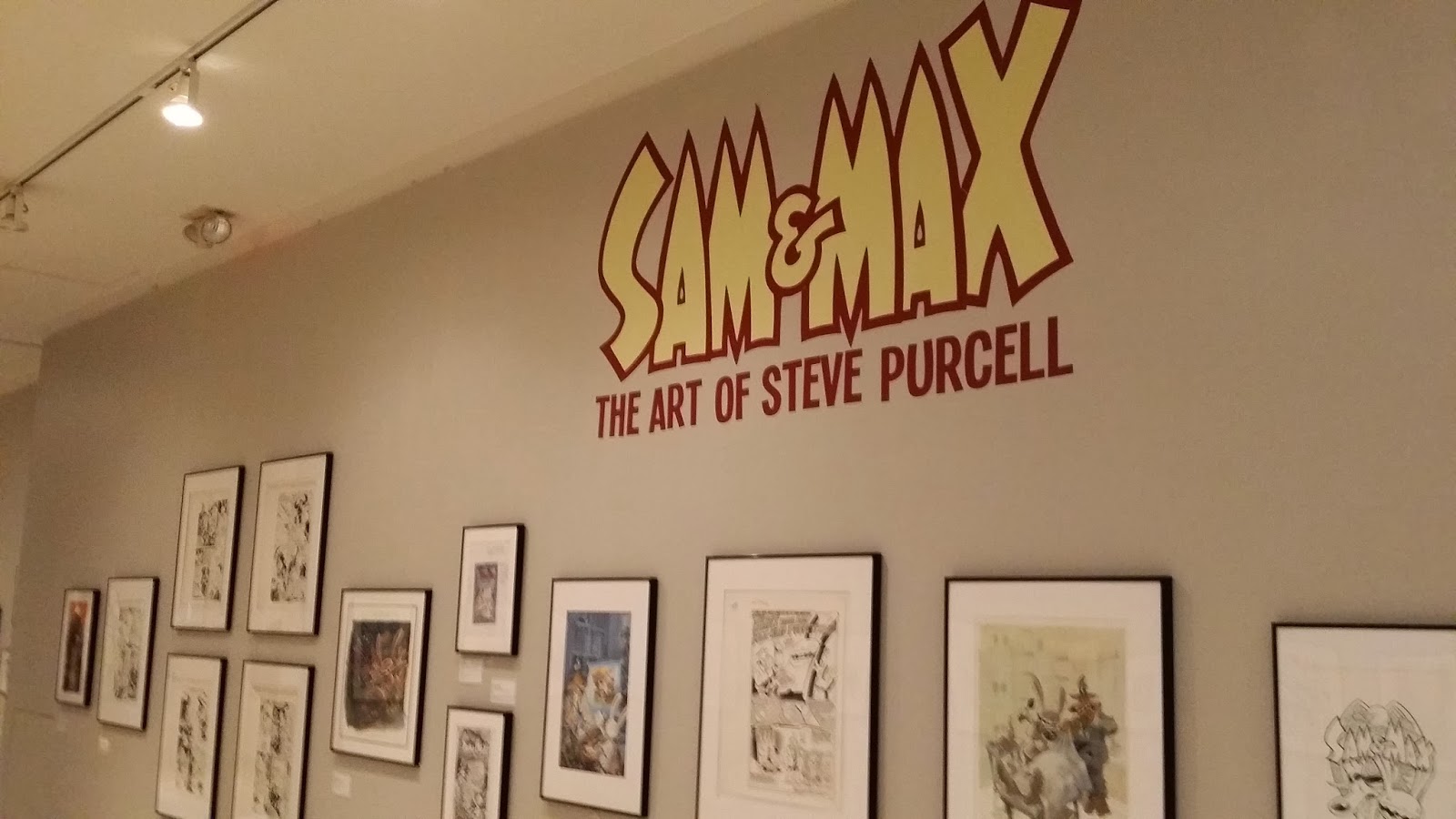 11:00 am PST, Cartoon Art Museum
After church I went around Yerba Buena and walked around the block as far as Moscone Center, then doubled back to reach the Cartoon Art Museum. This museum is interesting since it specializes in comics. There was an ongoing retrospective on Neil Gaiman's Sandman series, displaying original art donated by the artists themselves.  I recognized one panel in particular (from the Tempest comic book) since I had that before.

Right beside the Cartoon Art Museum is the Museum of the African Diaspora, but I did not enter it. 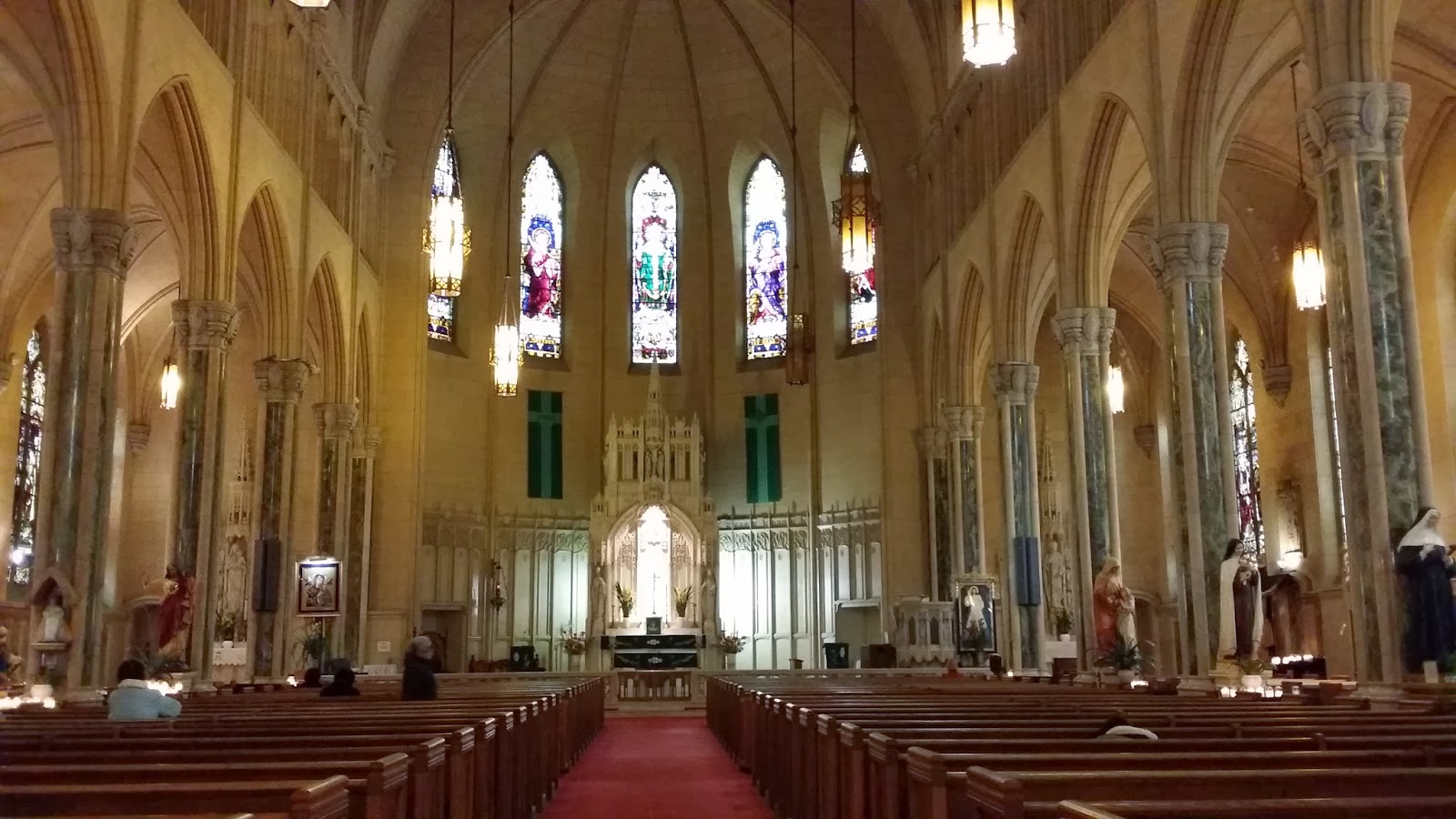 10:30 am PST, St.Patrick Church
After breakfast I headed down to the south of Market Street but I backtracked because I ended up in a street full of winos. I retraced my steps and went a few blocks east, and I found myself in St. Patrick Church. I went inside the Gothic styled church and prayed for a bit.

9:47 am PST, 02-20-2014, 1 Hallide Plz
I think I had a good night sleep (other than being woken at 3am by a drunk roommate who locked himself inside the bathroom) and I hardly notice any jetlag yet. After a brief shower (it's 11°C outside but I still can't go outside without doing that daily) I went out for breakfast.  I got one at a burger joint (again) while I am plotting my schedule for the day.