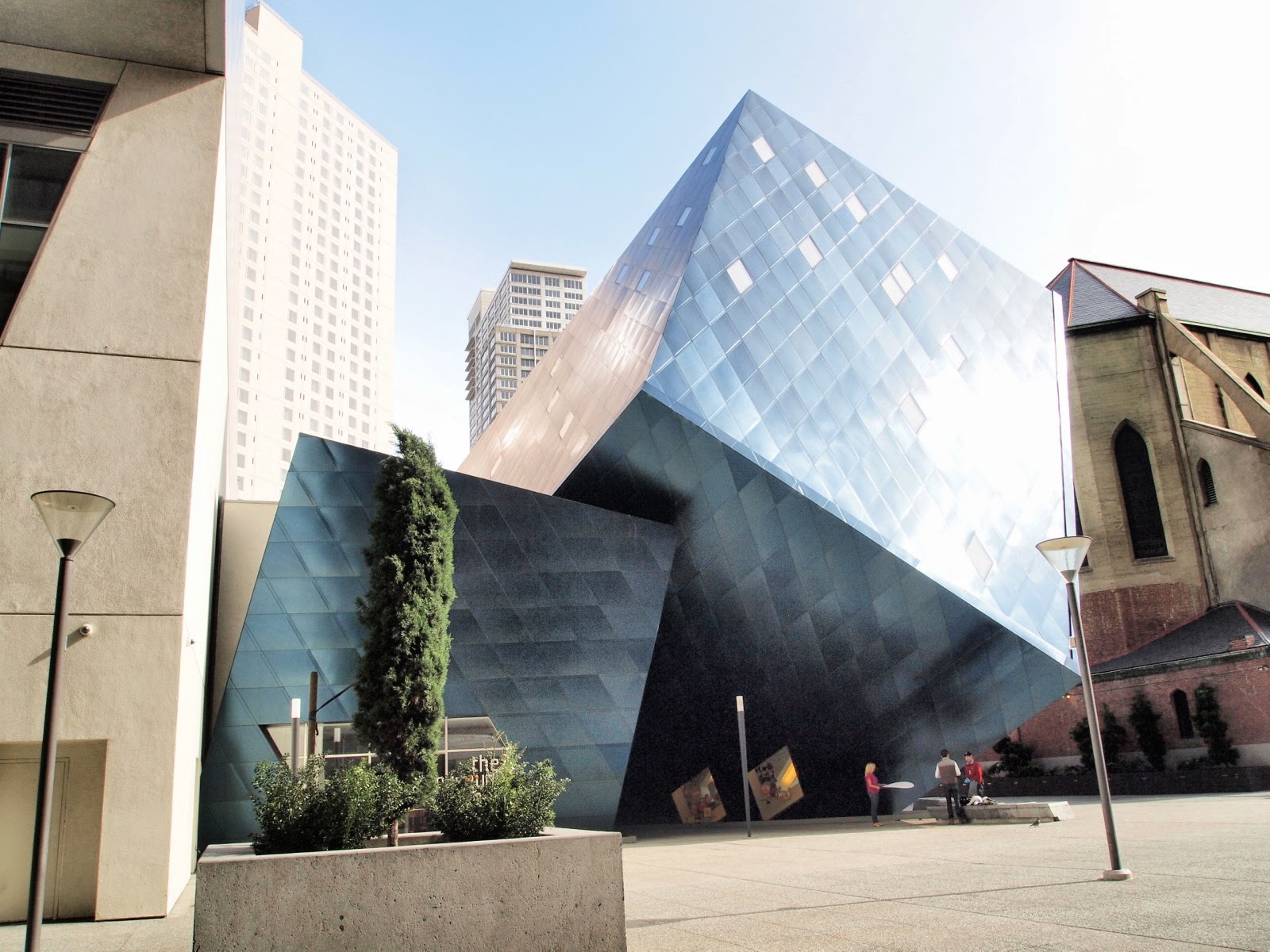 Originally I wanted to go to San Francisco Museum of Modern Art but I learned that it was closed for repairs. With that option unavailable I thought I would not be able to visit any museums in the city, but I found two of them while exploring the South of the Market area, the Contemporary Jewish Museum and the Cartoon Museum.


What drew me to the Contemporary Jewish Museum was the striking architecture of the building that currently houses it. Designed by renowned architect Daniel Libeskind, the building is a fusion of the old and new. The "old" part of the museum is the brick Jessie Street Power Substation building, from which the "new" part, a dark-blue steel cube, dissects at an angle. The effect is breathtaking.

Aside from the fact that this museum curates works related to the Jewish culture and history, this is unique in that it has no permanent collection. The exhibitions are borrowed from other cultural institutions.


There were several exhibitions when I visited. There was the exhibit about the art and life of children's book illustrator Arnold Lobel, highlighting the colorful characters from his books such as Frog and Toad, Mouse Soup and Fables.It ran from November 21, 2013 to March 23, 2014.

The most interesting collection that I saw was the Live Archive by Jason Lazarus. The works of the Chicago-based artist were presented in four parts. The first one was the Too Hard To Keep, a collection of items - contributed by people around the world - that are for them too difficult to retain because they remind them of joys and pains from the past.


More of a social commentary, the Phase I/Live Archive collected Old Occupy Walk Street signs. Occupy wall Street was a protest movement that started in Zuccotti Park in New York. Interestingly I visited that park when I was in New York in 2013.

The third part of Lazarus' exhibit was a live performance of a student learning to play Chopin's Nocturne in F Minor op 55 no.1, and the fourth was a collection of sculptures, installations and photographs.The Lazarus exhibit also ran from November 21, 2013 to March 23, 2014.


I moved to the Biblical realm when I entered the gallery housing the works of Polish graphic artist Arthur Szyk. The Art of the Haggadah (a haggadah is a text read during the Passover Seder) tells the story of the Jewish diaspora using illuminated texts. Szyk's works exhibited here were also mostly a commentary on the Nazi Germany and the Third Reich. The exhibit runs from February 13 to June 29, 2014

There was also an ongoing exhibit on the history of the development of kibbtuz in Israel. A kibbutz is a communal movement that combines Zionism and socialism. The members of the kibbutz started as farmers but with the goal of creating a society that is equal and free from exploitation.


The last exhibit was called the Black Sabbath. At first I found it odd as I associate that with the heavy metal band. It turned out that this exhibit is about the Jewish influences to black musicians from the 1930s to the 1960s.


In all I was pleased that I was able to find this museum, even unplanned. It was one of the unique museums that I've been to, and it's a great way to enrich my understanding of the Jewish culture, and of contemporary Jewish artists.

How to Get There
The Jewish Contemporary Museum is at 736 Mission Street, San Francisco, California. You can take a BART to Powell  Street or Montgomery, then walk to Mission Street.

Useful Info
The museum is open every day except Wednesday, from 11am to 5pm. Entrance fee is $12 for adults, but free every first Tuesday of every month.

Photography is only allowed on some sections of the museum so ask first before you take photographs.
architecture California Contemporary Jewish Museum culture Daniel Libeskind museums San Francisco United States