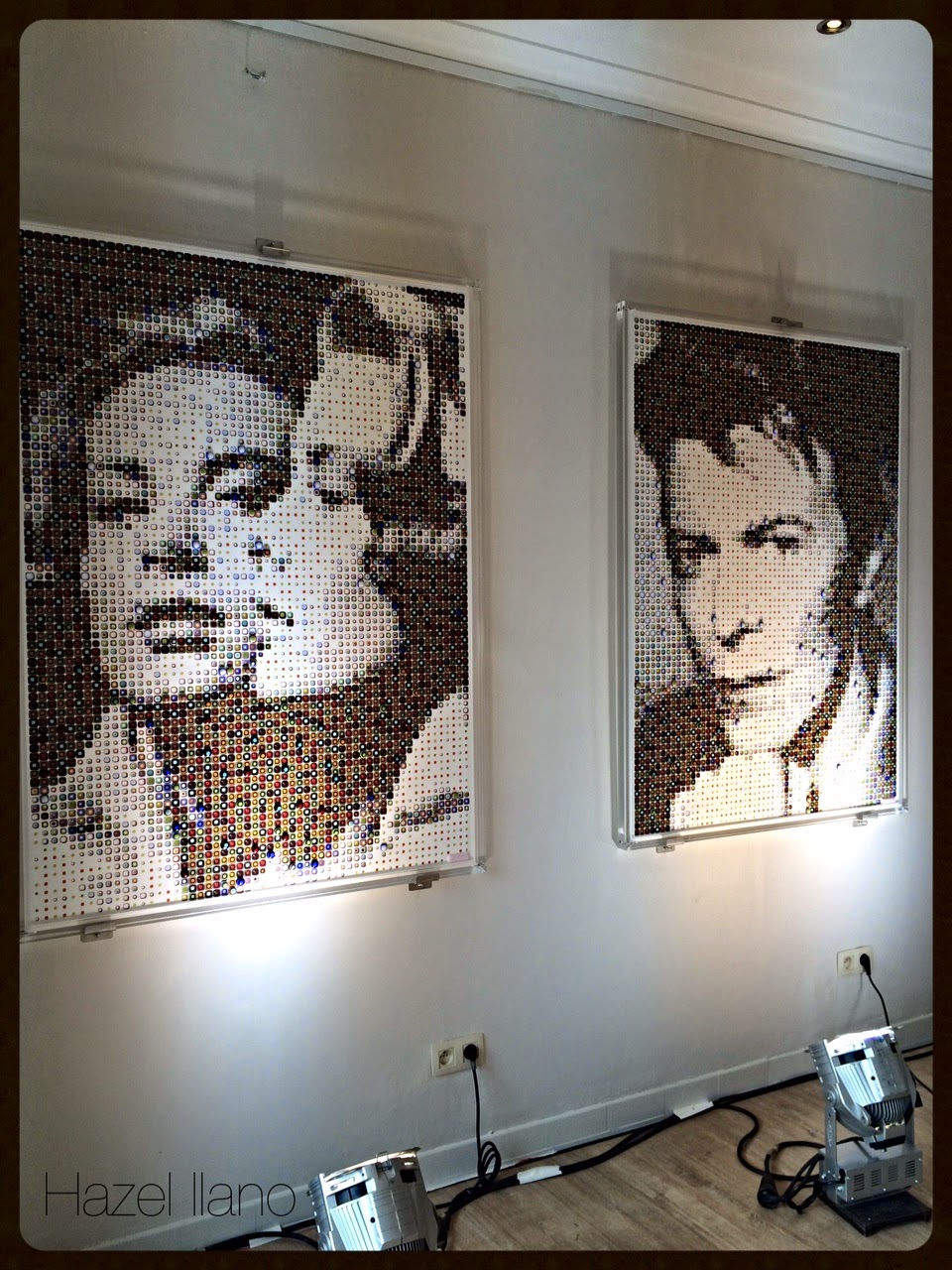 I was just done with the first half of my tour inside the city’s Museum of Fine Arts when I headed for the centrum to check out this cool, new way of portrait-making using a technique called glass fusion.  It’s the melting together of tiny, square bits of colored glass, one on top of another, to form a singular piece or “pixel” and thousands (yes, thousands!) of those pixels to form a picture.  In this case, the result is a portrait, that when viewed from a distance appears only in sepia.  Very fascinating AND intriguing.

Finding the art gallery that housed Ms. Scheltjen’s exhibit was pretty easy.  It was located just across the town hall.  And even on that day itself that there were a gazillion of people who came to celebrate Ghent’s annual ten-day festival, I found my way.

The moment I entered the gallery, I immediately realized that the artist herself was there.  I was in luck!  And just a couple of minutes after, an imposing figure stepped in – it was the city’s beloved mayor Daniël Termont!  He shook hands with all of us present in the room and then proceeded to have a chat with the artist and have their picture taken.  I just stood there in astonishment and utter delight that I just had to take a selfie with them in the background haha! 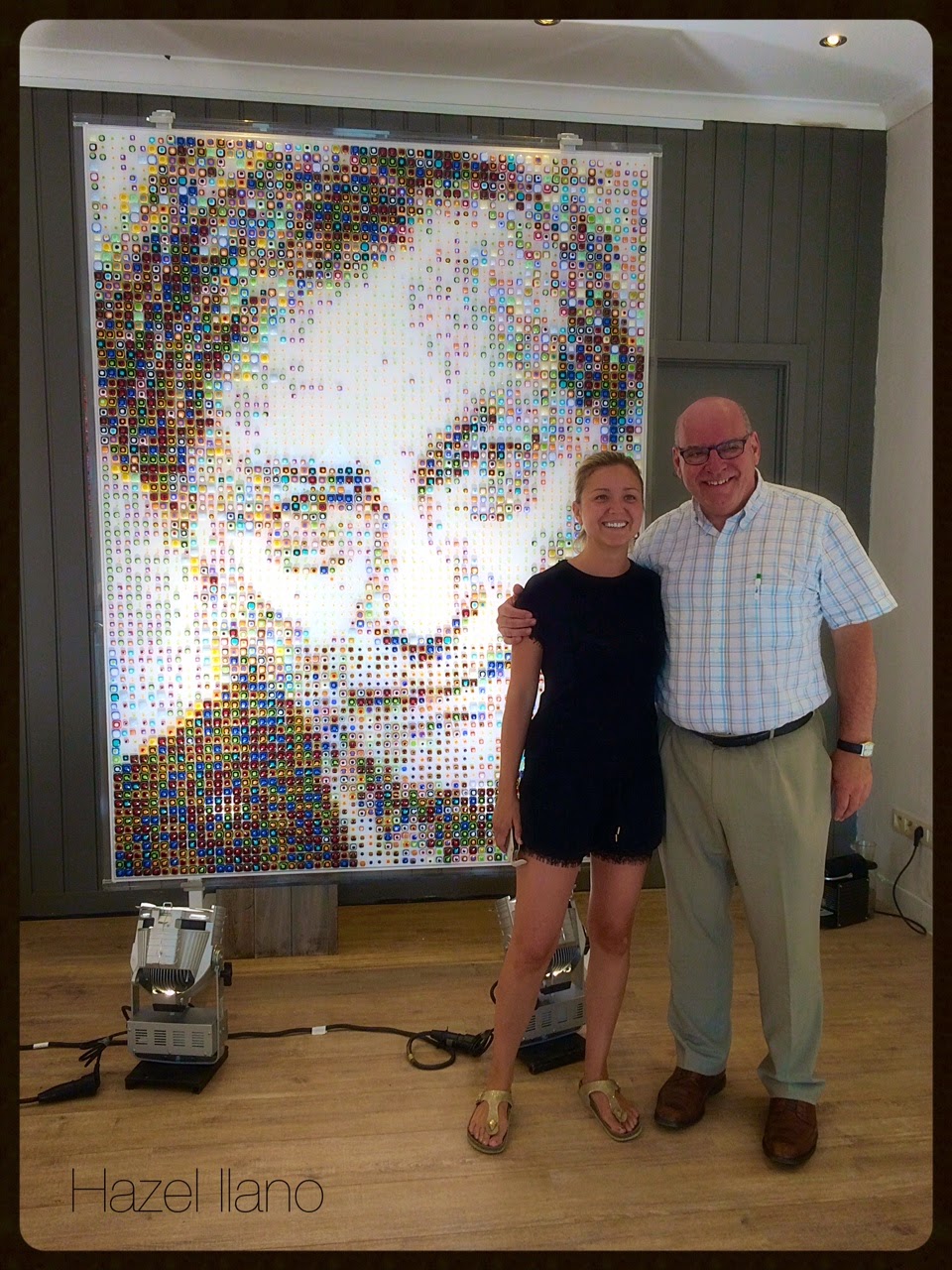 Shortly after the mayor left, I found myself rubbing elbows with the artist herself!  Ms. Scheltjens exuded warmth and openness, you just couldn’t help but be drawn to her personality.  And when she talked about her work, she did it with sincerity and passion, and incidentally her artwork spoke to my ideals of what art should be – something well-thought of and planned, executed diligently up to the last detail, and makes the world even more beautiful and interesting because it now exists.   Her art truly impressed me and brought me back memories back in my university days when I was doing painting and rendering projects in architecture class, but I digress.

The portraits on display at the gallery were mostly those of internationally known celebrities like Mick Jagger, Brigitte Bardot, David Bowie, and Grace Kelly.  But one that stands out from the rest was that of the late Jan Hoet, Belgium’s most renowned art critic who died late in February this year.  Unfortunately, Jan Hoet had never heard about this portrait while it was in the works.  He was actually still alive when Ms. Scheltjens started with it; she worked on it for eight months!  It’s just too bad that she didn’t get to bring this to Mr. Hoet’s attention soon enough, but I am hoping that this remarkable portrait of him will one day end up in the museum of modern art in Ghent that Mr. Hoet himself founded.

On a lighter note, I also found a young girl’s portrait in progress hanging in the corner of the gallery.  It turns out to be a portrait of one of Ms. Scheltjen’s kids.  How cool is that!  And that’s how I discovered that the public can actually have their own portraits made by Ms. Scheltjens.  It’s painstaking work, which will take almost like forever to finish, but the result is an exquisite art form that will last for generations and generations to come, even beyond, because it’s all made of glass!

Ms. Scheltjen’s portrait exhibit is currently running and ends some time in October, but if you wish to catch her works much later, one can always visit her website at http://www.glassfusionart.be/ unless they’re all sold out.  ;-)