I have high expectations of Singapore Airlines, which I flew in during a business trip to Singapore. The airline is, after all, rated five-star by Skytrax, which conducts surveys and rates the best airlines, staff, food and inflight entertainment in the airline industry. The reputation of the airline is also high among friends and acquaintances who've flown in the airline. But is Singapore Airlines really that cracked up to be? This is my review of the two flights I've flown.

This was a business trip so my tickets were booked through my company. I flew in Economy class, and my roundtrip fare from Manila to Singapore cost around $450; I was kind of surprised by it as I thought it would be more expensive than that. Tickets can be booked online through the airline's website, if you need to do it yourself. I would guess that this would be a rather painless exercise.

Singapore Airlines fly to 244 destinations in 58 countries. From Manila, it flies to Singapore five times a day, with the earliest flight at seven in the morning. The last flight from Singapore arrives at around 10:30 in the evening. All SA flights now use the Terminal 3 of the Ninoy Aquino International Airport.


Aircraft
The airline only flies widebody jets, which include the Airbus A380, the Airbus A330, and several variants of the Boeing 777. The aircraft that was used for both flights was the 777-200, which can accommodate up to 266 passengers in a 2-class configuration. Singapore Airlines has one of the youngest fleets in the industry but the plane I'm in doesn't look so new.

Cabin and Amenities
As the plane is a wide-body, the cabin layout for coach is a 3-3-3 configuration. For business class, the seats are arranged in 2-2-2 configuration. The cabin is tastefully decorated, with blue and lavender the predominant color, at least on the seats. One nice touch that I noticed was that they have lotions and sprays in the lavatory so you can avoid smelling bad and having rough elbows while on flight.

Seats
Coach seats have a 34-inch pitch and are 17.5 inches wide. They come with side bolsters that give better back support, and the headrest cradle your noggin comfortably. I find the seats a bit cramped, compared to  that of Philippine Airlines or Delta for example, which are 18.5 inches wide. The armrest is moveable, but it doesn't fold all the way such that you can have two seats when you don't have a seatmate. Also part of the foot rest broke off during the first leg of my flight. The seats also do not have any USB ports so you cannot charge your device while on flight. 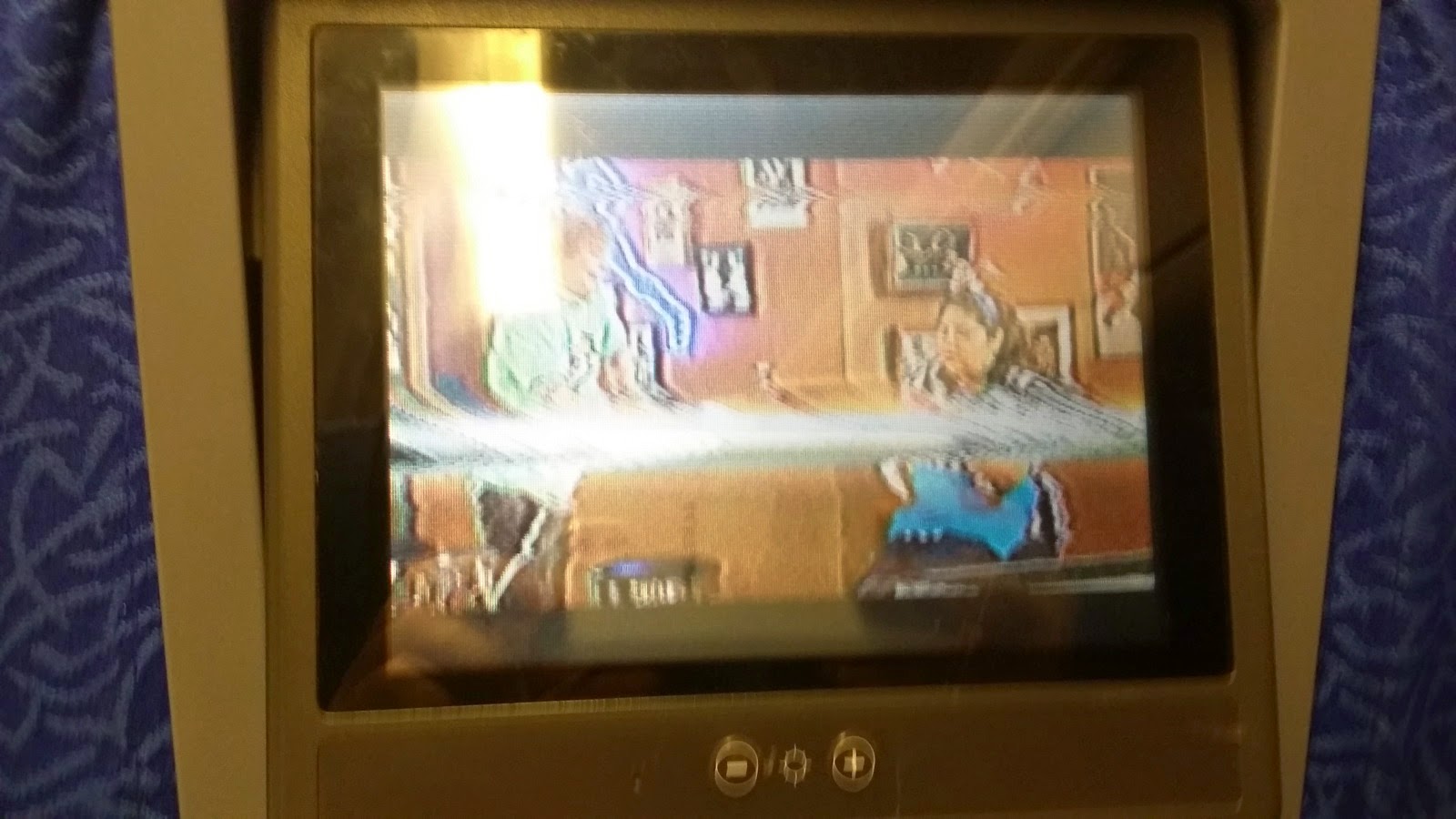 In-flight Entertainment
Each seat comes with an on-demand inflight entertainment system, controllable using a remote tethered to the seat.

There are several genres available both for films and TV shows; I've seen some fairly new movies and shows on the selection, including the latest season of The Big Bang Theory. Aside from films, streaming music is also available, as well as video games, with the remote serving as the controller. I knew that the plane was old because the screens are small - about half an iPad mini - and the pixels are large enough to be noticeable. On my return flight the AVOD selection menu wasn't working so I was stuck with the comedy channel. The video quality wasn't that good too. The colors are washed out and the pictures have streaks on them, like the VHS of yore.

Singapore Airlines have an inflight magazine called SilverKris, and duty-free items, listed in a catalog, are sold on board, so there are other things to pass your time aside from watching Sheldon Copper on a tiny screen with VHS quality.

Food
As I took the early morning flight flight going in, breakfast was served during the flight. On the way back which was an evening flight, there were only two choices of entrées during the flight, chicken and fish. Breakfast consisted of scrambled eggs with chicken sausages (another option was marinated bangus and rice). The eggs are runny and salty.

Dinner for me consists of white fish fillet with potatoes and greens, served with salad, a bun, and a piece of cake. I opted for white wine to accompany the fish, served on a small tumbler. At least the airline uses stainless steel cutlery and not plastic, so that was a plus. I would imagine the food in business class would taste better.

Crew and Customer Service
I have no complaints at all with the crew and customer service in general. They were attentive and courteous enough, and the boarding process went on without a glitch. I was even able to check in using the mobile app, although I still have to go to the counter in the airport to deposit my check-in luggage. The mobile boarding pass was sent to my email, and I got text messages about the details of my flight.

Frequent flyer program
Singapore Airlines has a frequent flyer program called KrisFlyer. It is also a member of the the Star Alliance, so you can earn points from other airlines such as Lufthansa, United and All Nippon Airways. You can also earn points when you fly SilkAir, which is a subsidiary of the airline. You can track of your points on the web or on the aforementioned app.

Overall Impression
Judging from my trip the airline doesn't feel like a five-star. The seats are cramped, for one. Food, too, leaves a lot to be desired. Maybe luxury can be experienced in business class or first class, but that's expected, as you pay fares that are three to ten times more expensive than coach. Sure, the airline can be fuzzy with things, like having a different patterns of batik for the uniforms of the stewardesses, depending on their level, but these kind of attention to detail does nothing to my flight experience. I would appreciate a more practical amenity - for example getting a full can of soda instead of being poured a small amount in a tiny plastic cup - than a meaningless one like knowing that the chief stewardess' uniform has more intricate pattern than that of a mere flight stewardess.