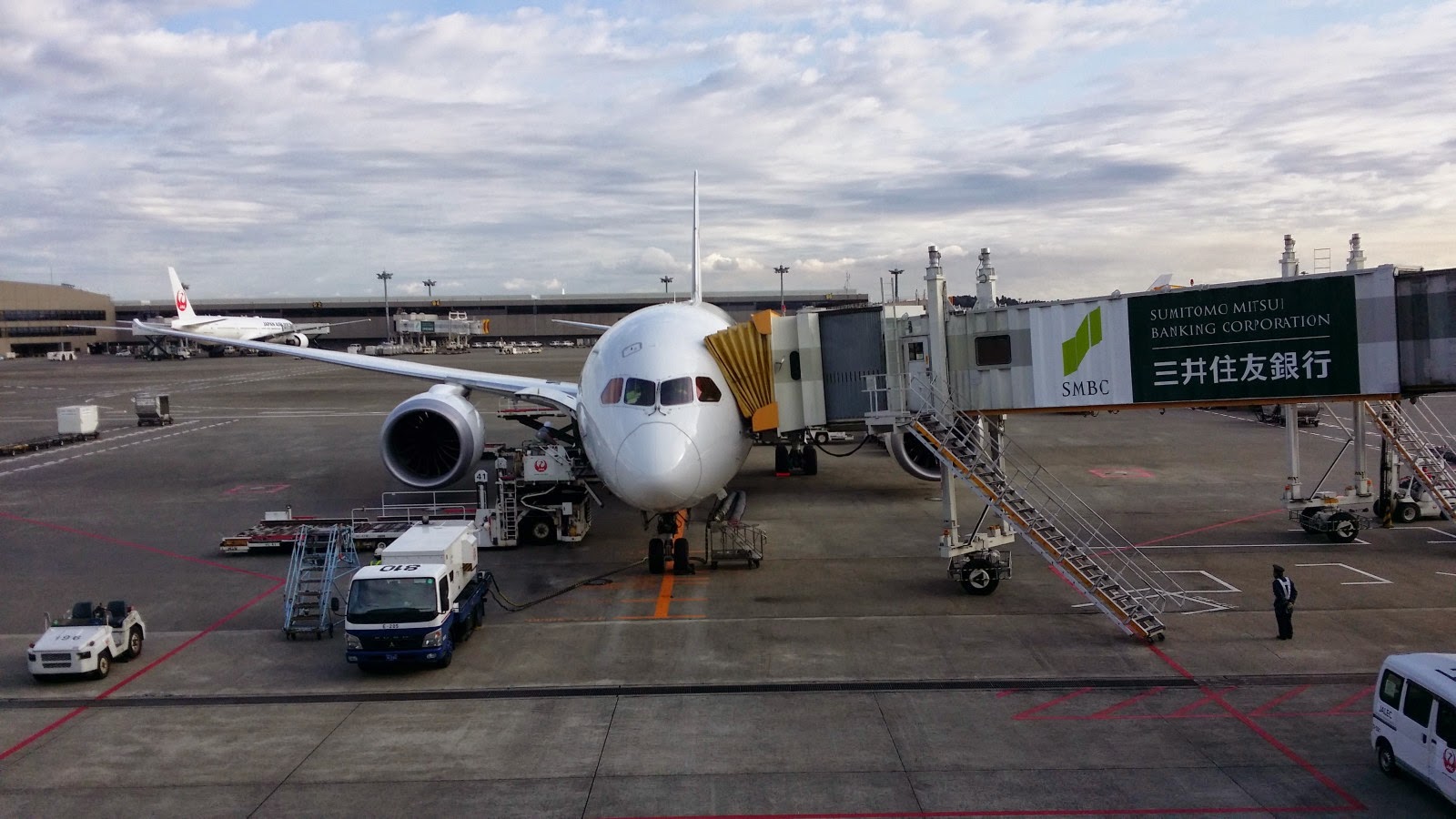 Japan Airlines is the flag-carrier of Japan and I was able to fly with the airline during my trip to Japan in December. This is my review of the trip and the airline.

Booking, fare and Schedule
I booked my economy seat ticket to/from Tokyo-Narita during the Travel Expo in Manila, so the booking was done through the JAL sales staff. It was also discounted, as I paid only about half the normal fare. As I bought the ticket without having a visa first I was told by the staff that they can reimburse me for the ticket cost if my visa application gets denied, despite my ticket being restricted and non-rebookable. JAL offers four seat classes: first class, business class, premium economy and economy class, flying to 220 destinations in 35 countries worldwide.

I think it is possible to book on the JAL website but I find the site confusing and tedious, which is a shame really. The mobile app for Android which I downloaded is also useless, as it is only in Japanese. I gave it a zero rating in Google Play for usability, or lack thereof.

The flight that I took, Manila to Tokyo-Narita left NAIA Terminal aroun 2:50 pm, and arrived in NRT just before 8pm, and the flight back left NRT at 9:30 am and arrived in Manila ahead of time (although we landed late because of runway congestion in MNL).

Aircraft
Being a professed avgeek I was actually giddy when I learned that the flights I am taking will be on the new Boeing 787-8 Dreamliner (the original booking showed the 767 as the aircraft). The Dreamliner, constructed mostly of carbon composites, is one the newest twin-engined wide-body airliners out there. It can typically seat 310 passengers in 2-class configuration. The aircraft still had that new-plane smell when I entered, and you can really tell that it's brand new and high tech.

Cabin and Amenities
I think it's a bit unfair that I am going to rate the cabin of the JAL 787 higher than that of the Singapore Airlines 777 that I flew with in September, as the former is new. But, I think JAL, just like the rest of the Japanese culture, really put an effort to maintain its premises (cabin) in spic-and-span conditions. Overall the cabin is very clean, including the seats, and even the toilets. The overhead bins are larger so there not much jostling with other passengers when storing the hand-carried items. A pillow and a blanket are provided.

I also like the color scheme and the cabin decor - minimalist but adding a bit of flair to the overall experience. It is also noteworthy that the cabin of the 787 is very spacious, and I really dig the mood lighting installed in the ceiling and the whole cabin. I also liked  the high-tech windows, which do not have the usual pull-down shade. Rather, a liquid-crystal film that turns opaque on demand is installed in the windows. A dimmer-like controller is used to set the opacity of the window, from clear to totally dark.

Seats
I find the seats comfortable, with 31" pitch and 17.5" width, even though the pitch for the Singapore Airline 777-200 is an inch wider. The economy seats are laid out in 2-4-2 configuration and the business class in 2-2-2 layout. I took a window seat (47K) on the first flight, then got a middle seat (23E) on the flight back. Of course I prefer the window seat over the middle seat, which is kind of uncomfortable, as the elbows of two seatmates are invading my space. (Seatguru map for JAL 787-8).

The tray tables are OK, not too flimsy, but I think it might creek if you put a fullsize laptop on it. There's a cupholder on it, adding points for usability. There are also several seat pockets, including small ones contructed from netting for other things, not just for magazines and safety instruction card.

One thing though that I didn't like about it is the controller, which is located on the side near the armrest, making it prone to accidental bumps.On the plus side, the headsets that JAL provided are branded (Sony), giving the whole thing a premium feel. It uses two-prong headset plug so I won't be usable if you take it out from the cabin (would make a nice collectible though, considering that it's a Sony and there's also JAL branding on it).

I am aware that there is WiFi service onboard on some of the aircraft of JAL but I wasn't able to use it (update: according to the comment below, this 787-8 will have WiFi on March 2015).

JAL also has an inflight magazine called Skyward, should you get bored with the inflight movies, but alas, it is mostly in Japanese, so it's only useful for the pictures.

Food
I don't particularly enjoy airline food, but I think JAL's is sufficient and palatable. There's complimentary bottled water, and coffee and tea are generously served.

On the first flight the main course was grilled pork with yakiniku sauce, served with soba, glass noodles, fish with yosegain, fresh fruits and a cup of Haagen-Dazs ice cream for dessert. Going back the main course was Hamburg loco moco style, with veggies and smoked salmon, plus braised tofu and egg cake, fresh salad and fruits, then vanilla Haagen-Dazs ice cream to finish. I opted for red wine  (JAL branded (Paul SAPIN or Spain) wine) for that flight too.

Crew and customer service
The crew aboard the aircraft is very polite, helpful and efficient. They serve the food quickly, and during and after meals they go around the cabin offering water or juice to the passengers. I have no particular negative experience with them.


I was not able to do a web check in for my flight back, so I got a middle seat on my way back. The ground staff was very apologetic that I didn't get a window seat; she did help me get the least undesirable seat by giving me suggestions of which seats left are better.


Overall impression
My overall impression of the airline is very positive, based on my two flights. I think JAL should have gotten a higher SkyTraxx rating compared to Singapore Airlines at least. They do need to work on the usability of their website, and should at least have an English-language mobile app.