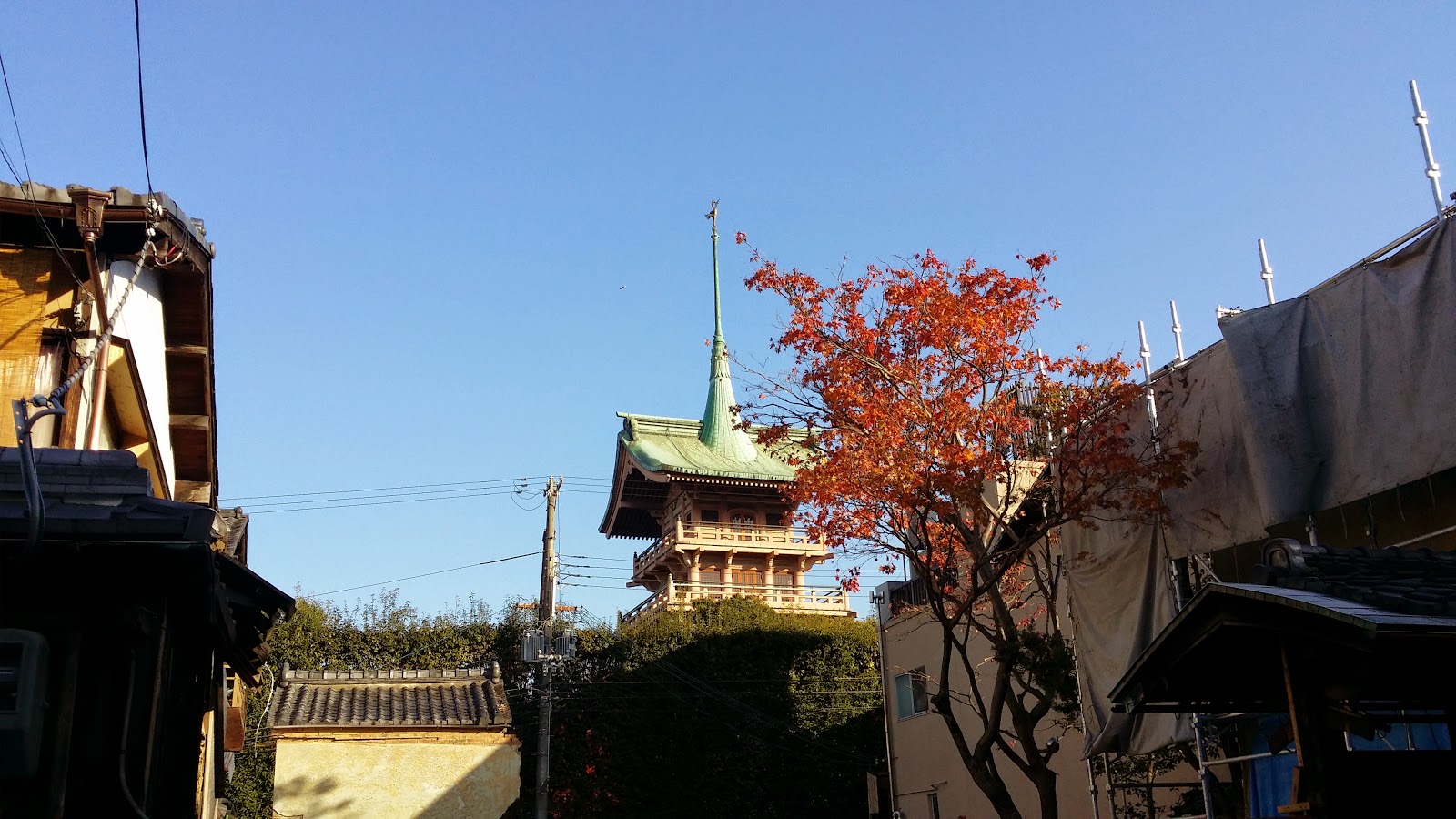 It's Day 5 now of my trip to Japan and here's what happened during the day. 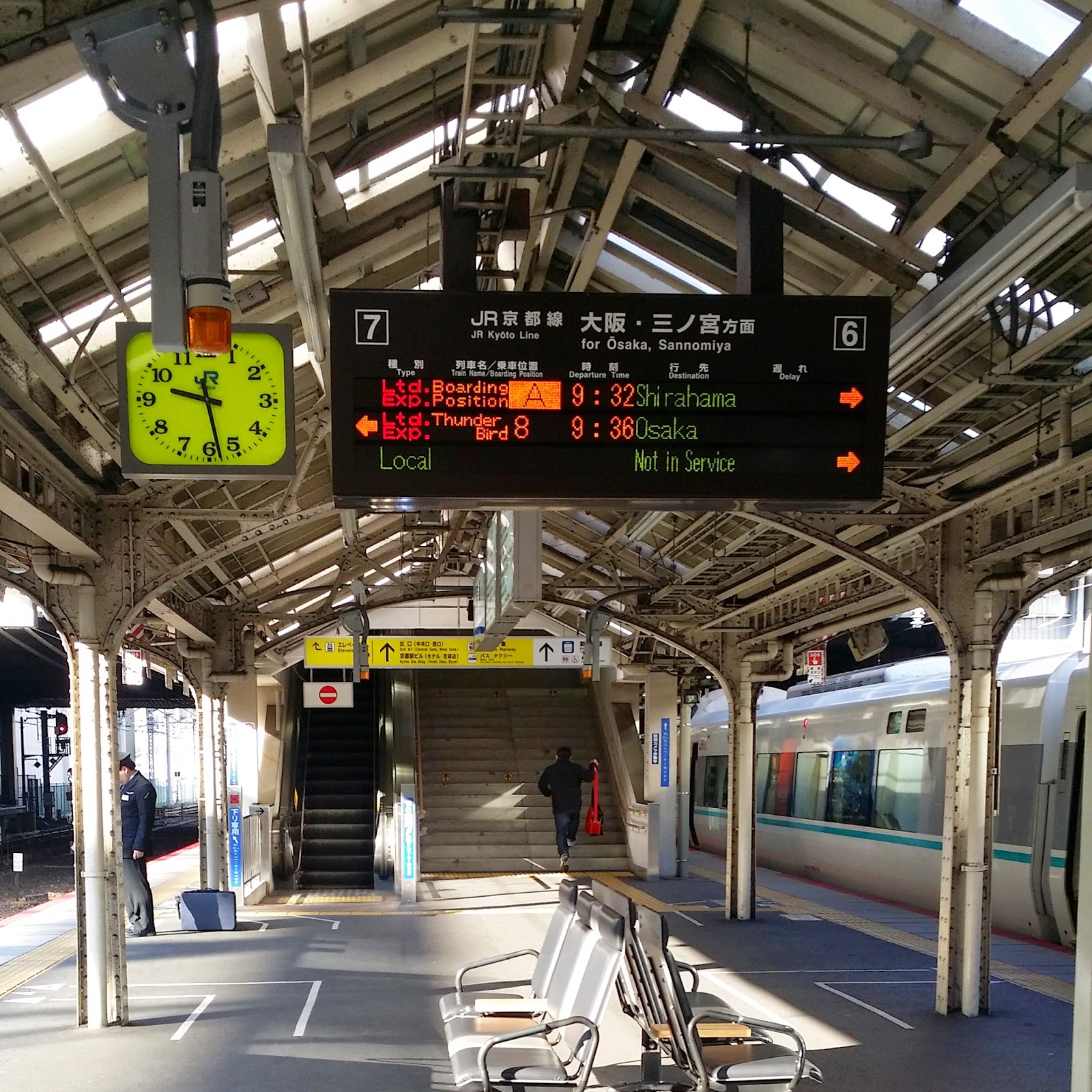 9:30 am, Kyoto Station
I caught a bus to Kyoto Station and went immediately to the Japan Rail office in the station to get a ticket. Destination: Osaka. I grabbed a latte before going to the track to wait for the train.

10:00 am, Shin-Osaka Station
The trip was actually less than an hour but I had to figure out what line to take next to where I am going. I finally got that I had to go to Osaka station first before taking another line that will take me to Universal Studios. 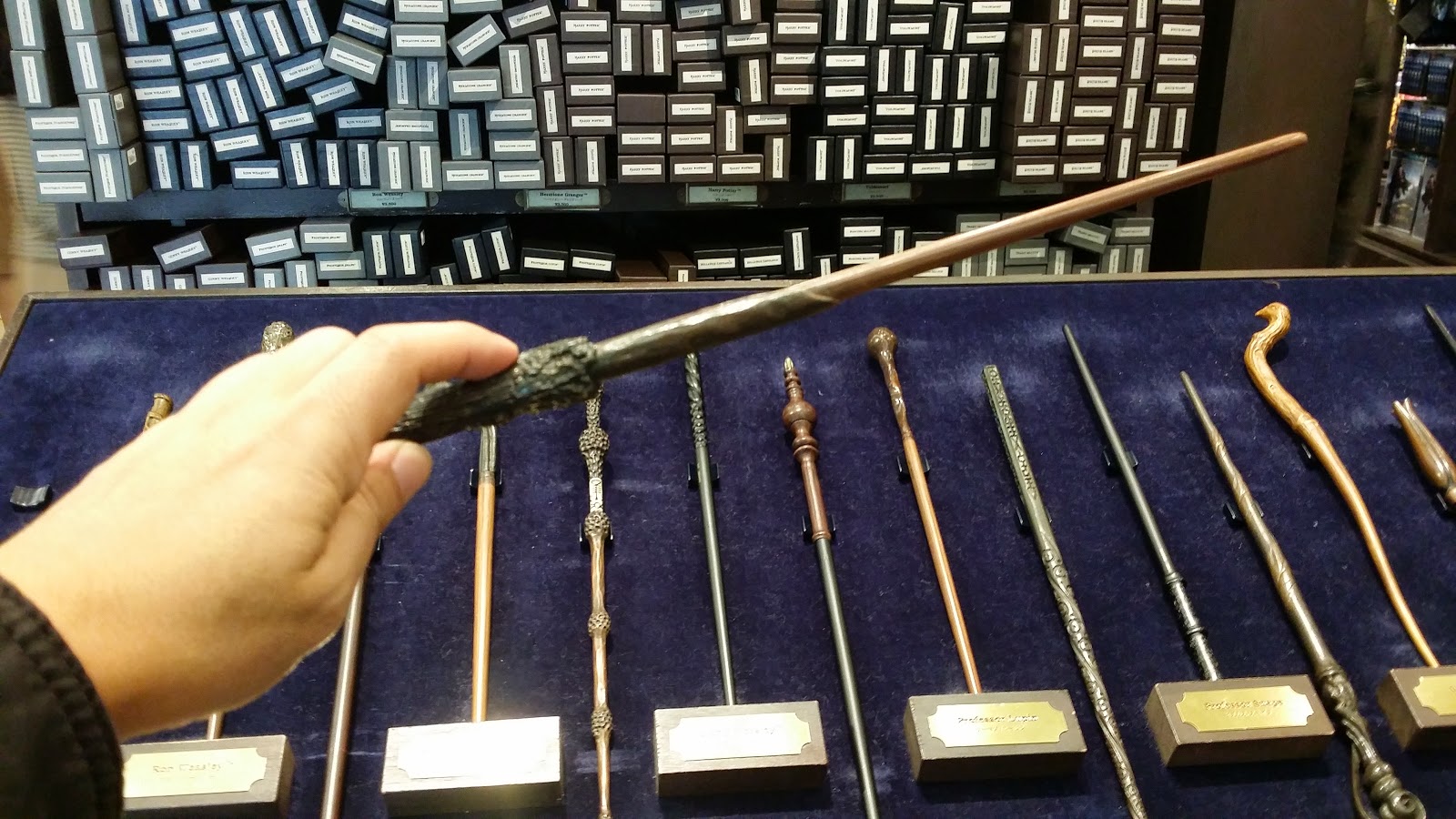 11:00 am, Universal Studios
It may seem shallow to ditch the things I can explore in Kyoto and actually go to a theme park, but I only came here for one reason only, and that is for the Wizarding World of Harry Potter, one of the attractions of the park set to the world of the J.K. Rowling's books.

There's a line for the tickets when I came in, and I couldn't get into the Wizarding World right away. The time I got was for 1:20pm so I had to go around and see the other attractions of the park. I also grabbed some lunch while I'm at it - an overpriced burger meal at a burger joint set on the 1950s Americana. 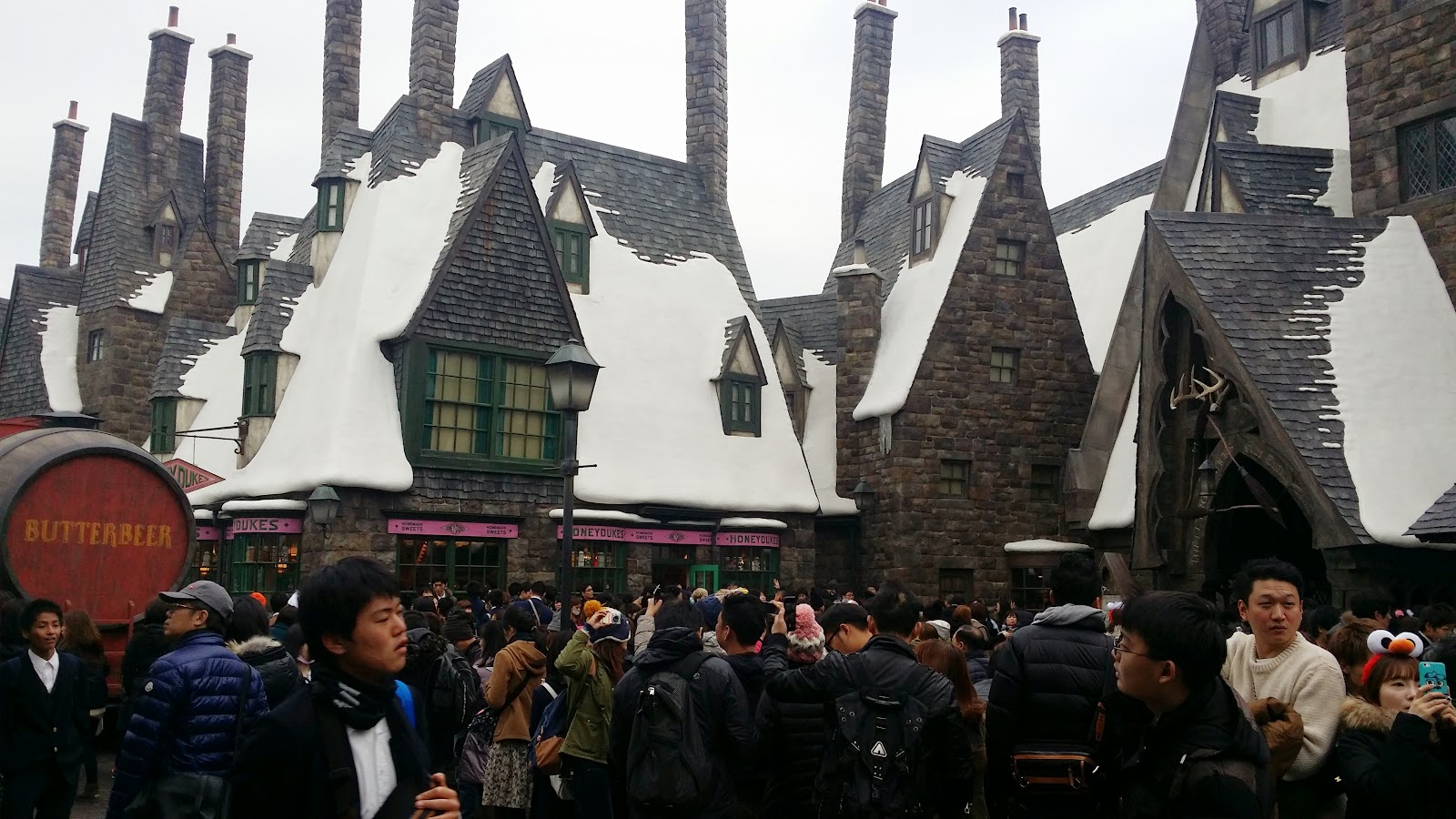 1:20 pm, Wizarding World
My anticipation was building as the clock gets closer to the appointed time. Finally, I was able to enter the village of Hogsmeade, and see the Hogwarts castle in real life (though still make believe). It's all kids stuff really, but I think my inner child will tell you the castles of Kyoto can wait for another day. 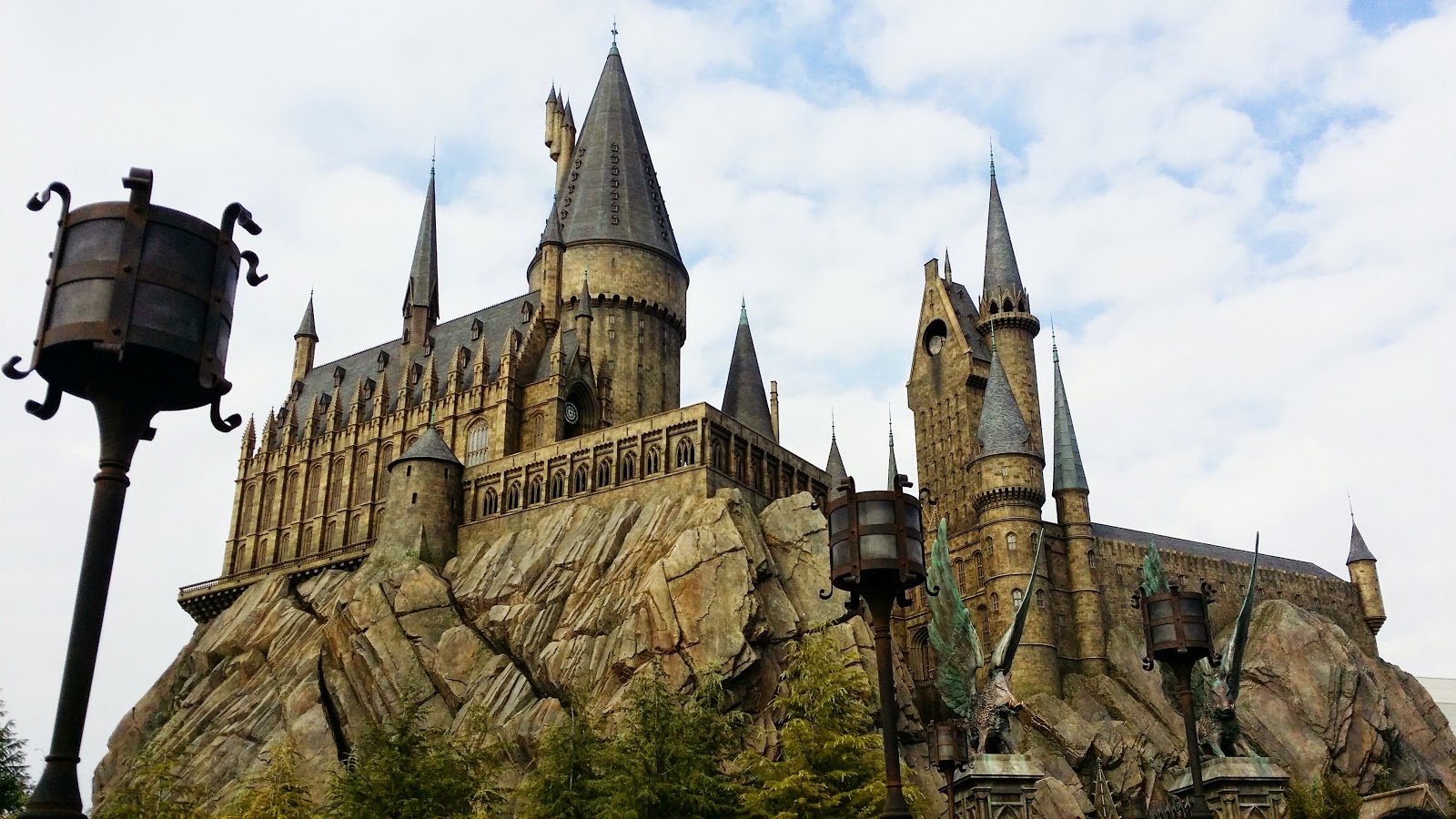 The castle itself was built just as I see it in the movies, and I was very excited to see it. The village of Hogsmeade of course is just laid out in a way that they can sell merchandise of all shapes and sizes to all the fanbois who came in the gates but I didn't really care. There's the Three Broomsticks and Ollivander's, as well as Zonko's and the Owlery - all as I imagined them in the books. It was definitely more fun for me than spending the day visiting a real imperial palace. 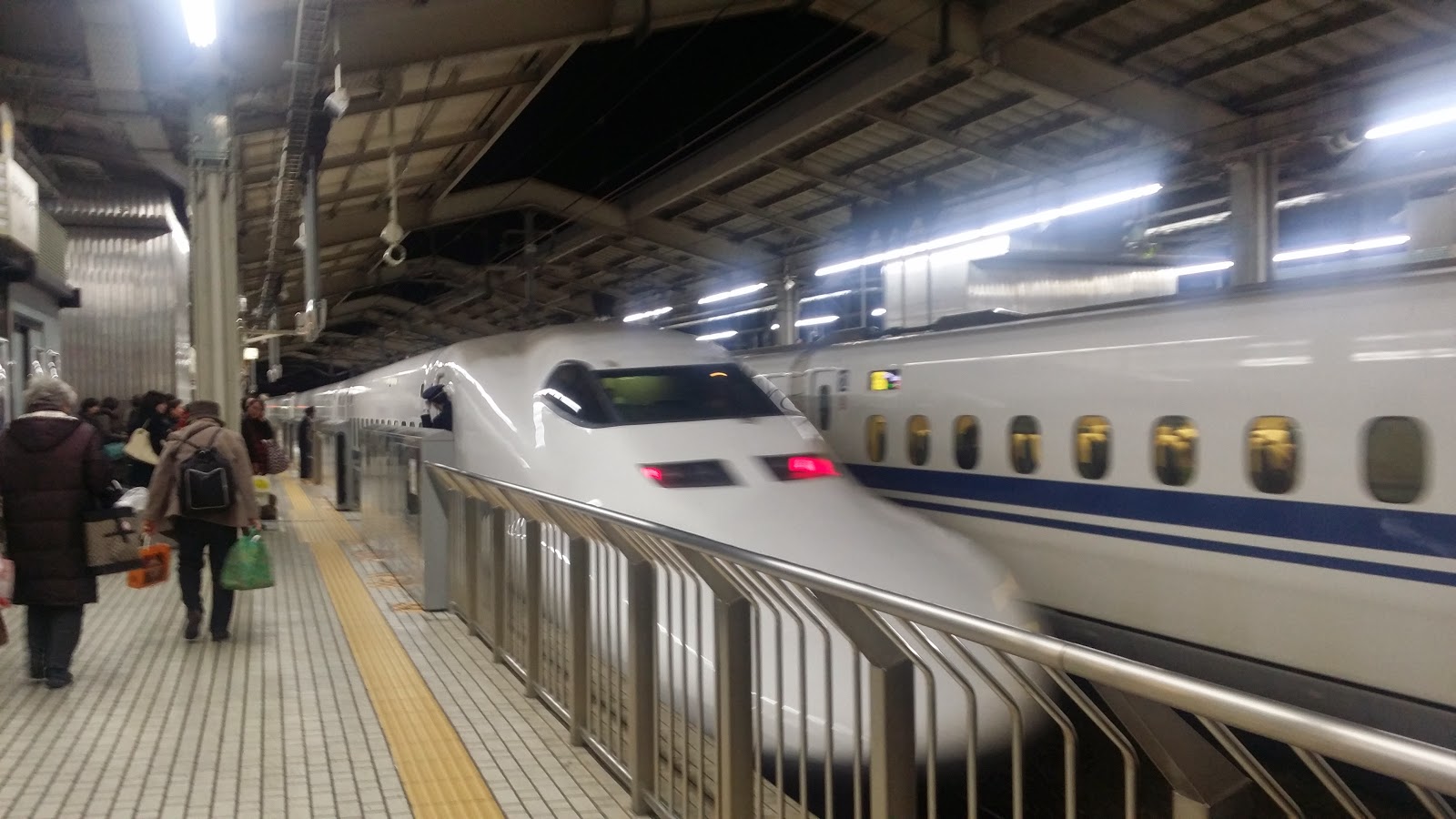 4:30pm
I got out from the Wizarding World late in the afternoon, after which I went back to the train station to catch a ride back to Kyoto. I got one via the Shinkansen, so the trip was rather quick. I didn't go to the hostel right away when I arrived; I explored the vicinity of the Kyoto Station until early in the evening. 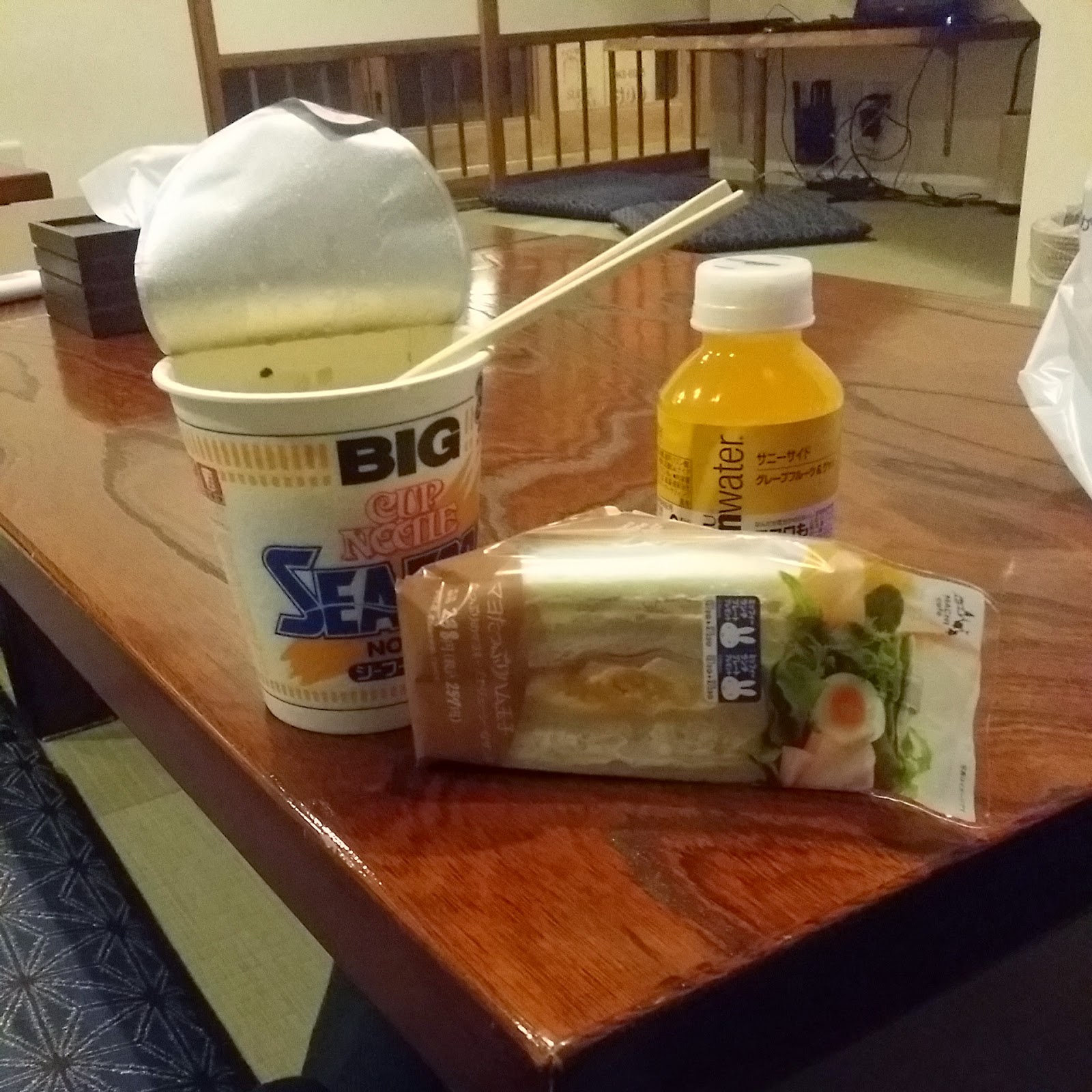 8:30pm
I'm back at the hostel and was just resting. It was a long day. It was cold out too, so I just got my dinner from the convenience store in the corner - instant ramen and a sandwich  - a proper backpacker dinner should I say. I won't stay late tonight too, as I have to travel to Hakuba tomorrow afternoon, and squeeze that visit to the castle and temples in the morning.

Day 6
9:00am
I began my day by going through and fixing my luggage, as I am checking out from the ryokan today. Then i set out to explore Kyoto with the time I have, about 3 hours. First was the Yasaka Shrine which is close to where I'm staying. 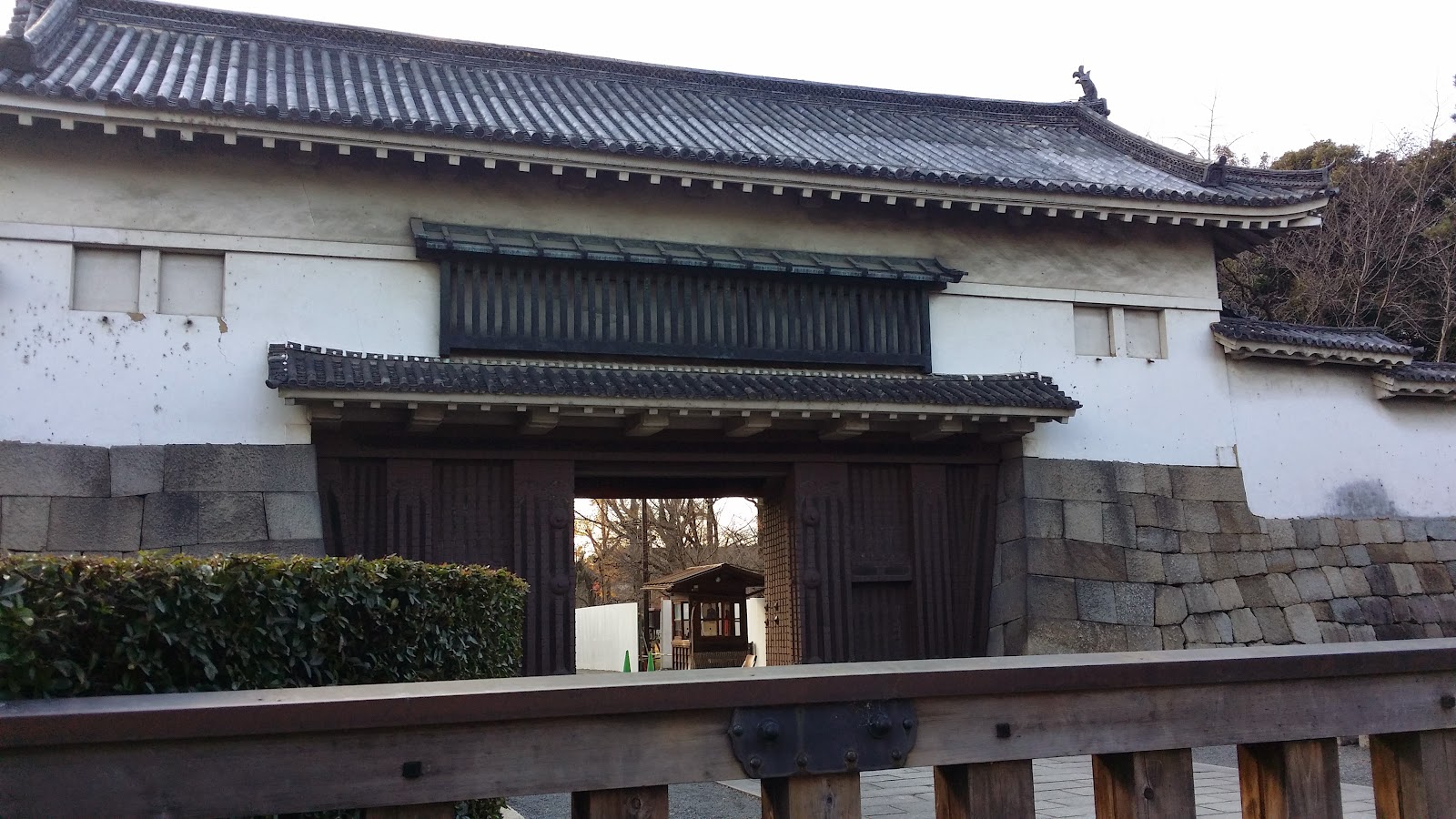 10:00am
After Yasaka I took a bus to the Imperial Palace but I realize I didn't have an appointment so I didn't get off the bus proceeded to the next on my list: Nijo Castle, which is a UNESCO World Heritage site. Unfortunately it was closed, so I've only seen the moat and the battlements from the outside.

11:00am
I got in another bus from Nijo and went to Gion to see another shrine. I think I need to go back to Kyoto in the future to explore it further. 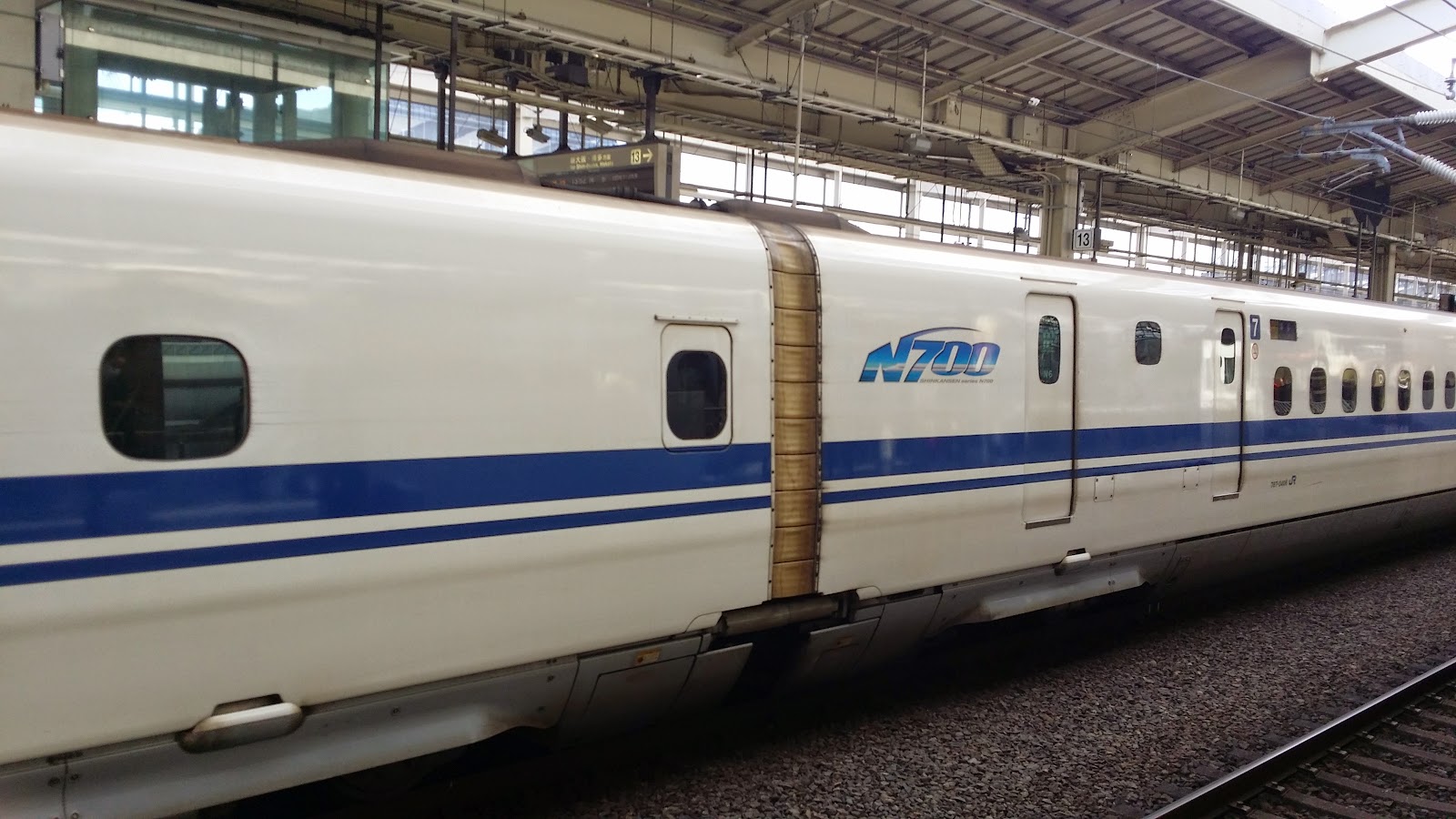 12:30pm.
I checked out from the ryokan and went to Kyoto Station to get my ticket: Shinkansen to Nagoya, then two train rides from Nagoya to Matsumoto, then Matsumo to Shinano-Omachi which I assumed the train will go on to Hakuba. That mistake would cost me later.

6:00 pm
On out way to Shinano-Omachi aboard a local JR train.

7:00 pm
I thought the train will go on to Hakuba from Shinano-Omachi but I was wrong. It actually went back. After furiously searching Hyperdia for alternative rides, I switched in one of the small stations and luckily, there's another train just about to set for Shinano. I got it but I lost time. The next train from Shinano to Hakuba will be at 8pm.

8:40 pm
My stop is actually on a station just before Hakuba (good thing I checked Google Maps). From the station I jumped over the tracks to get to a small pathway that will take me to the hostel. There's snow and it's -2 ° C. 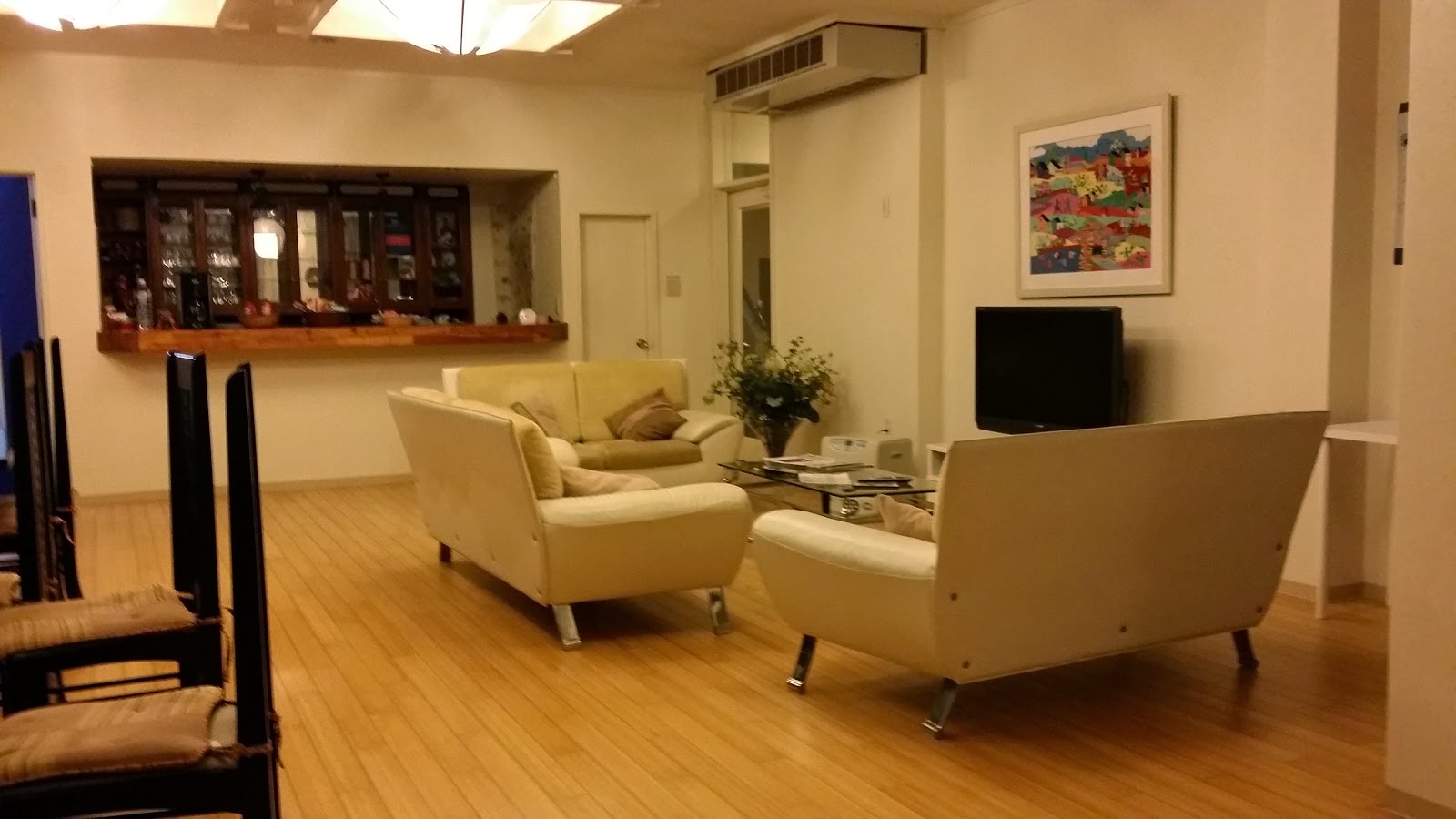 9:00 pm
I finally arrived at the hostel, K's House Hakuba Alps, after trudging the wet and slippery snow-covered road. I was pleasantly surprised, it's one of the coziest hostels I've been to. The owners were very nice too. They got me snowboarding lessons for tomorrow for a discounted rate too. 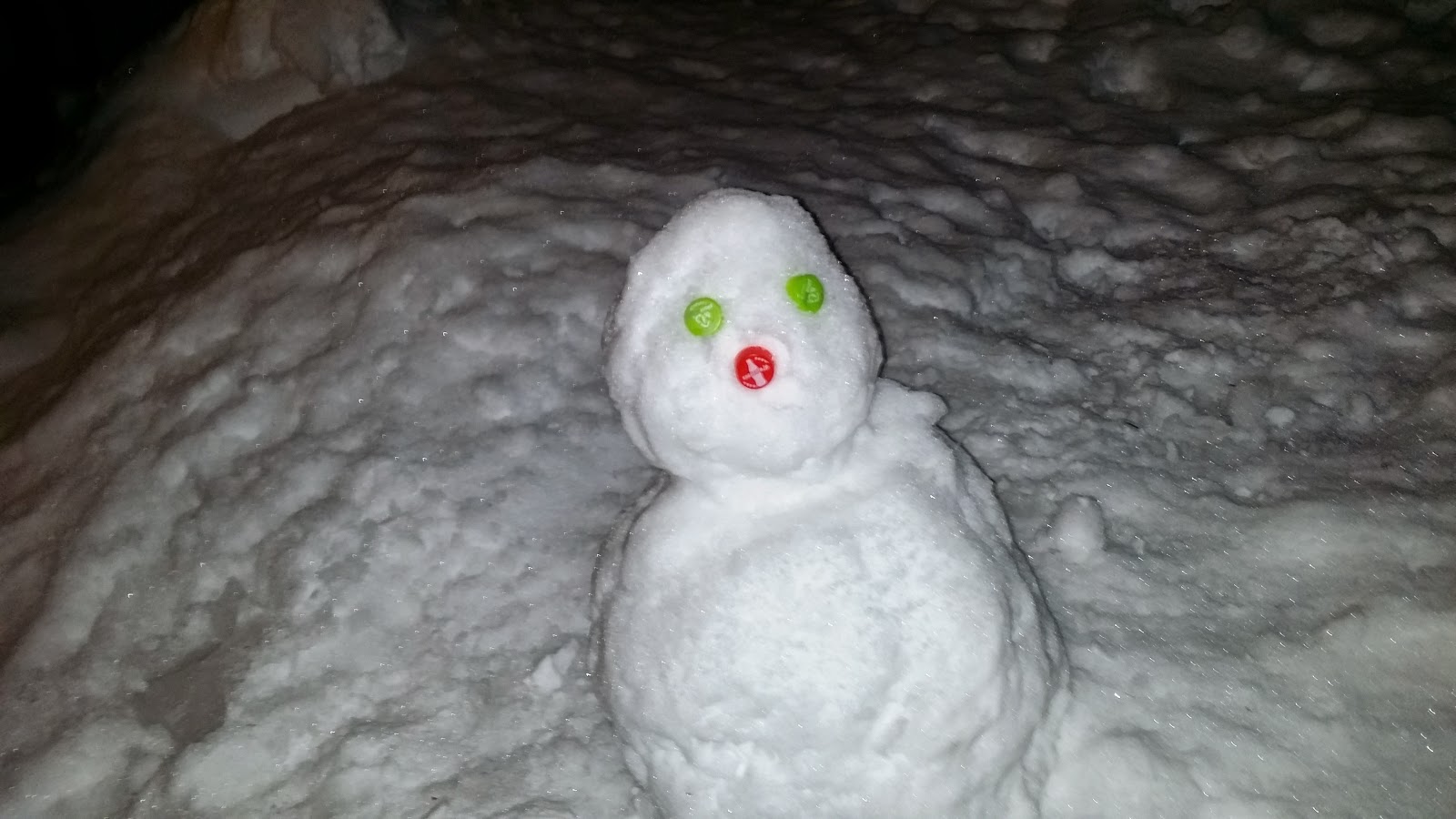 9:30pm
I have to go to 7-11 to get some food because the hostel is in a small village and the restaurants nearby are already closed. The 7-11 is about a kilometer away, which I will have to walk to in sub-zero temp. The instant ramen tasted so delicious because I was so famished. The tiny snowman outside the hostel made me smile though, reminding me that I finally made it to Hakuba, the reason why I wanted to visit Japan during the winter.