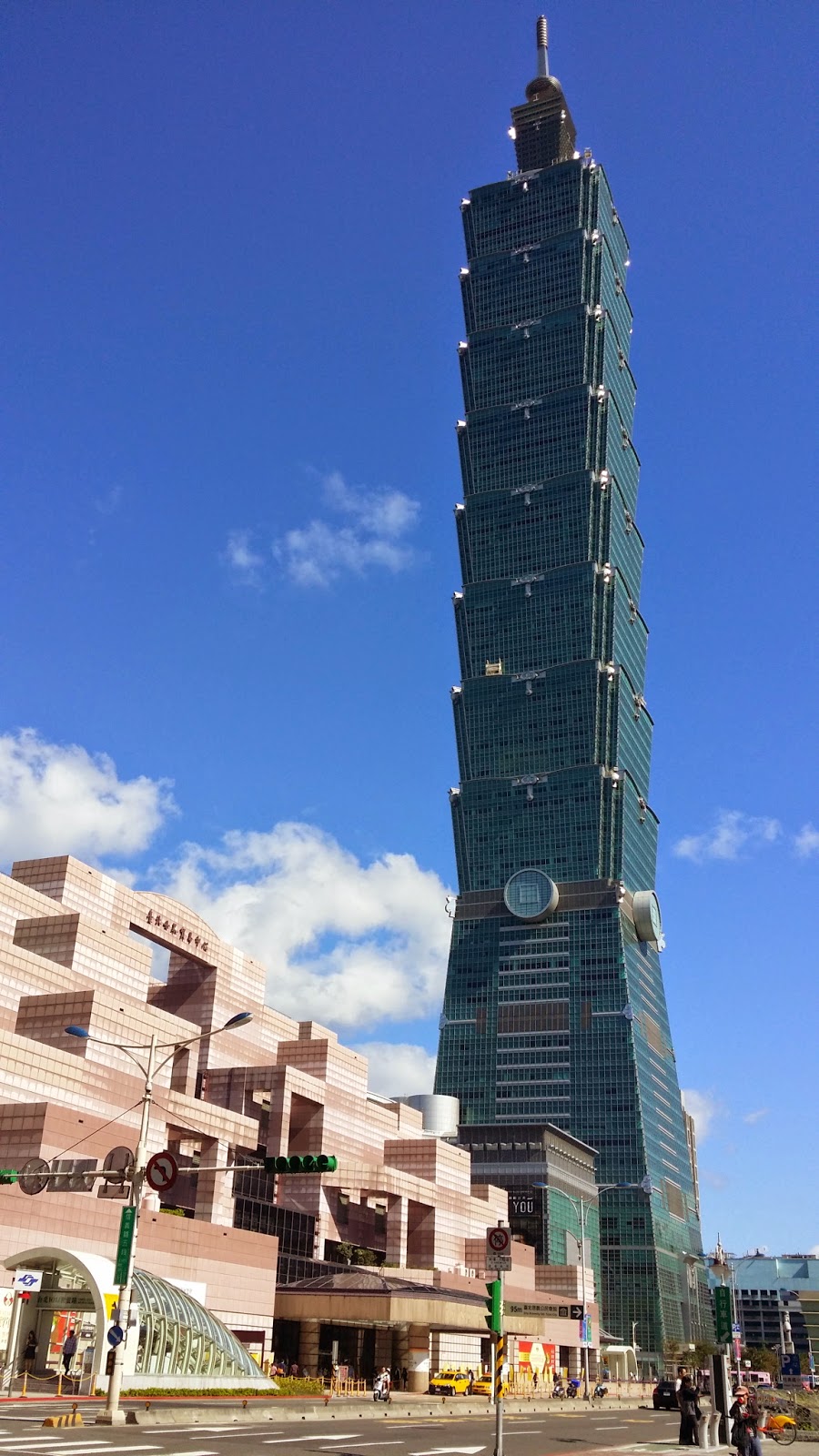 Between the trips to the US and Japan was the weekend trip to Taipei. I got my tickets to it first as the US trip was unexpected (as I already had a business trip to it back in March), and I only got my tickets to Tokyo a month later. If it weren't for the one-peso fare promo of Cebu Pacific I wouldn't have planned it al all. I am still wary of Taiwan, as the country has been behaving dickishly towards the Philippines on the diplomatic front, and I have all but written off the country as a destination. Still, the one-peso fare (and the prospect of visiting a new country) beckoned like a siren to a hapless sailor, and I booked my ticket as soon as the airline announced the promotion.

As I mentioned in this blog so many times I am drawn to skyscrapers, and Taipei has a notable one - Taipei 101. It is one of the popular destinations in the city, and I set aside half a day to visit it. The building is also right up on my list of supertalls that I wanted to check out (some of which I already have, such as the Empire State, Petronas, Shanghai WFC, Sears).

At the time of its completion Taipei 101 has its share of records: the first building to exceed the half-kilometer mark; the highest building in the world from 1999 to 2010; the highest building from ground to roof, a record once held by Sears Tower; tallest sundial; and the fastest ascending elevator speed, at more than a kilometer a minute. Some of these records are now claimed by the Burj Khalifa.

The observation deck, located at the 91st floor, is great for seeing the whole city from above, like looking at a giant Google Map but with noisy people around you. I actually had to wait for about an hour after getting my ticket before I can climb to the deck, but it was worth it, I think. The weather was great at that time with no overcast sky and clouds to obscure the view of the city.

The building's architecture is also unique, and is now synonymous to the city. It is segmented to look like a pagoda and a stalk of bamboo, both related to Chinese culture. The number 101, which corresponds to the number of floors the building has, also symbolizes the new century in which the building was built, and also that of high ideals, as it is higher than 100, the number for perfection [1].

The building is equally impressive to look at at night, when it is lit with different colors, depending on the day. It seemed to be out of place though, as most of Taipei is composed of low-rise buildings, so it sticks out like Ichabod Crane being surrounded by midgets.

The building was also featured in one of my favorite young adult novels - Artemis Fowl: the Lost Colony. The building's tuned mass damper - the 700-ton ball of metal installed at the top of the building used as a way to offset the swaying cause by strong winds or earthquake - was one of plot devices of the novel. It was used by the protagonist Artemis Fowl as a way to entrap an imp. It was actually impressive to look at, I think it is the largest solid metal sphere that I've seen. The gold colored orb - suspended from the ceiling with steel ropes as thick as my arm - has its own observation deck where people can see it and take pictures. They even created a cutesy mascot out of it. 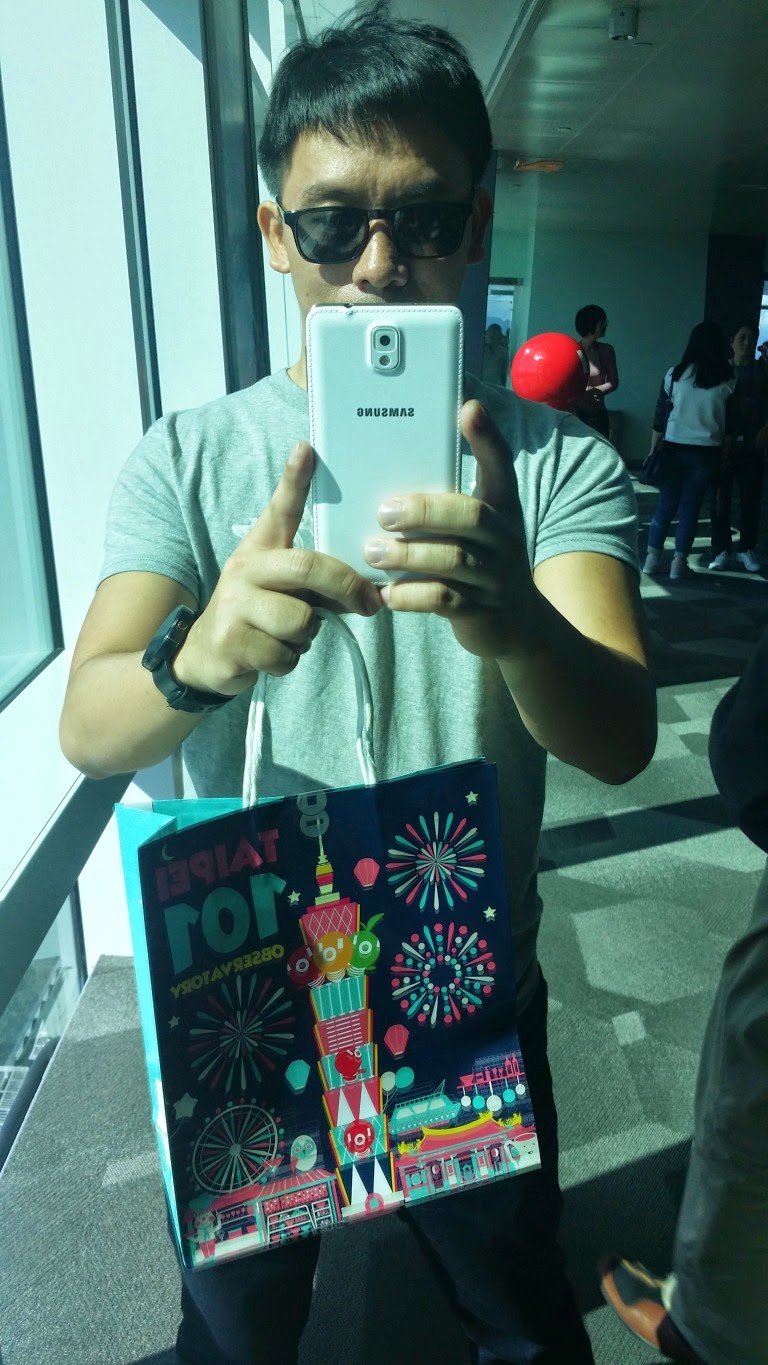 There are souvenir shops located at and right below the observation deck. Half of the floor is occupied by shops selling jade and red coral jewelry, which is really unfortunate because it means marine ecosystems somewhere were wrecked just to get those. Hopefully they were not from Batanes area, where Taiwanese poachers usually go.

There's also a mall at the first five levels of the building, which looked very impressive and high-end. The shops are way beyond my budget so I didn't get anything there.

Taipei 101 is located in the Xinyi District of Taipei. It is accessible though the Red Line, at Taipei 101/World Trade Center station.

Useful Info:
Tickets cost NT$500 for adults, NT$1000 for fast pass. The Observation deck is open every day from 9am-10pm.