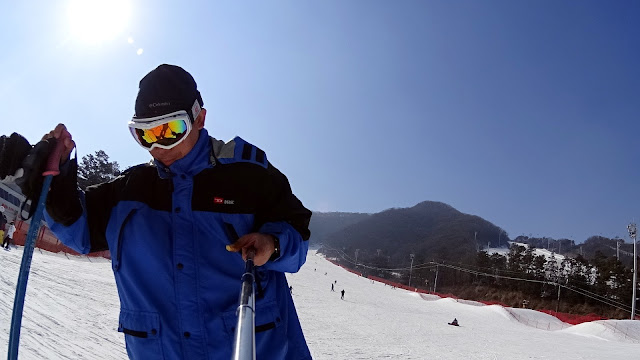 My main motivation for traveling to South Korea during the winter was to do winter sports. I want to try snowboarding again, which I did in Hakuba, Japan. I was in the country for four days, and I devoted a day in the ski slopes for it, although I was only able to try skiing, not snowboarding.

Around 7am on a cold Sunday morning (it was -12 Celcius) I was picked up from the hostel by the guide. There were several others in the group, including a Malaysian family, a group from China, and another from the Philippines. Our destination is the Jisan Forest Ski Resort. It is located in Icheon, about an hour or so from Seoul.

During the trip the guide gave us instructions such as where to get the ski gear, safety considerations, and beginners tips. This is my first time to try skiing, although I did try water skiing in Boracay more than a decade ago (I sucked doing that). There is an extra fee for snowboarding so I decided to just go ahead and try skiing. After we arrived in the village we went to the snow gear rental, where we got our jackets, gloves and ski pants. I think I got mine which are two sizes larger. I also broke my fingernail while fiddling with my clothes, so my thumb was bleeding when we got to the ski slopes.

After getting measurements for the skis and boots we assembled in front of the slopes. The guide/instruction then gave us the rundown on basically what a beginner needs to be able to ski: how to put on the skis and how to take them off, how to fall correctly and not break any bones, how to properly use the poles, how to "walk" with the skis on, etc. After the instructions we were given the rest of the morning and afternoon to ski around the area. My ticket did not include the lifts, so I basically stayed in the bunny slopes to try and practice.


My first impression was it was more difficult to do than snowboarding (people might debate me on this, but that's how it felt to me). It is also more complicated, since the there are two skis, basically independent of each other, and there are poles too. I was also carrying my Sony ActionCam, attached to a selfie stick, which clumsily complicated everything. I also didn't have breakfast (I was picked up too early), so I was trying not to pass out due to hunger or low blood sugar. Around noon I introduced myself to the Filipinos in the group and we had lunch at the nearby cafeteria. We practiced again after lunch.

I wouldn't say I didn't enjoy my first stab in skiing. I ventured to the higher ground so I can glide back down without having to use the poles too much, and I found it exhilarating, even if it wasn't very high. I imagine how fun it would be if the slopes we're in were as high as that in Hakuba. It was just as tiring as snowboarding too; I was also at the slopes for several hours and my legs felt like jelly afterwards.  Still, I made a mental note to try this again next winter.

How to Get There:
The ski resort is called Jisan Forest Ski Resort, it is located in Icheon, about an hour or so away from Seoul. To take public station go to Dong Seoul bus station. To get there, get off at Gangbyeon station in the subway, Line 2. Take the bus to Icheon (don't make the same mistake as I did, it's Icheon, not Incheon). At the Icheon bus station take the free shuttle buses to Jisan Forest Resort. 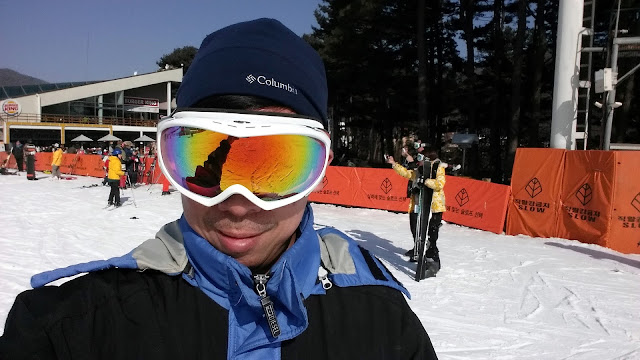 Useful Info
If you want the easy route, you may just sign up for a ski tour (your hotel or hostel can book it for you) to Jisan for 75,000 won, which includes basic instruction, transportation, ski, boots and pole rental. You may need to shell out another 20,000 won for the ski pants, jacket and gloves rental. The lift fee is 46,000 for the whole day. If you want to get a separate lesson, they start at 85,000 won for 1:15 class, 260,000 for 1:1 whole day lessons. Website: www.jisanresort.co.kr
Icheon Jisan Forest Ski Resort ski skiing South Korea winter sports winter travel