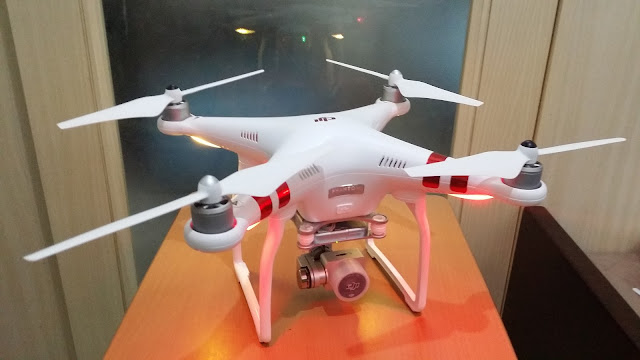 I have a new gadget in my travel toolbox - something that can give me a different perspective when looking at the places I am visiting. That gadget, if we can call it that, is the DJI Phantom 3 drone.

The Phantom 3 is a quadcopter-type aerial unmanned autonomous vehicle. Powering the x-shaped drone are four rotors, which drive the propellers. It is battery-powered and is controlled via a radio remote control.

Features
The drone has a satellite navigation module (receiving signals from GPS and Glonass satellites) that enables it to get its bearing. It also has a visual positioning system that it uses for landing, which comes handy especially when you lose contact with the drone and its return-to-home mechanism kicks in. The GPS module also made it easy for the aircraft to hover  in the air automatically, even when you let go of the controller.

Camera
The camera of the model I have, the Standard, can capture images in 12 megapixel resolution (3000 x 4000 pixels), with a 96° field of view on a f2.8 lens. It can also capture video in 2.7K resolution. Images and video footage are saved to a removable micro SD card.

The camera module is mounted on a 3-axis gimbal system, which enables it to keep the camera level even while the drone is moving or being rocked by wind, canceling out unwanted vibration or sudden movements. The gimbal can also move the camera to pitch of between -90° to +30°. The -90° position is what you use when you want to take a photo with the subject straight down.

Images are being beamed to an app in your smartphone or table (that you attach to the controller) via WiFi. Aside from live viewing high-resolution images, the app is also used for various controls, such as automatic takeoff, triggering return to home, and tweaking the settings of the drone.

The drone has a lithium-polymer batter that is rated for 4480 mAh, good for about 25 minutes of flight. Twenty-five minutes is too short when you're having too much fun piloting the UAV, so I'd suggest to invest in an additional battery pack. It can be charged to full in about an hour and a half.

Its WiFi antenna operates at 2.4 GHz, with a range of about  1 kilometer. On my experience the furthest I have gone was 115 meters up. When it loses the signal the aircraft will automatically initiate the return to home maneuver, which it did in this case.

Impressions
I love the Phantom 3, it was such a joy to fly and operate. I have already brought it to some of my trips (to Boracay and while flyboarding in Subic). I've also been practicing and flying the drone in the open fields in the University of the Philippines campus in Diliman.

I think that it's a great addition to bring in trips, as it enables me to get photos from unusual perspective, like 100 meters up. It does present a logistical consideration. I got mine a hard case backpack, so it mean's I will be carrying two backpacks with me when I travel, as I usually have a backpack as my carry-on luggage. I was stopped once while checking in the airport once too; the x-ray operator wondered what it was I was carrying. Of course I also have to contend with some prohibitions that would prevent me from flying the drone. When I was in White Beach, I have to sneakily operate the aircraft early in the morning so I can fly it over the beach to take some photos.

And it does make some very cool selfies.