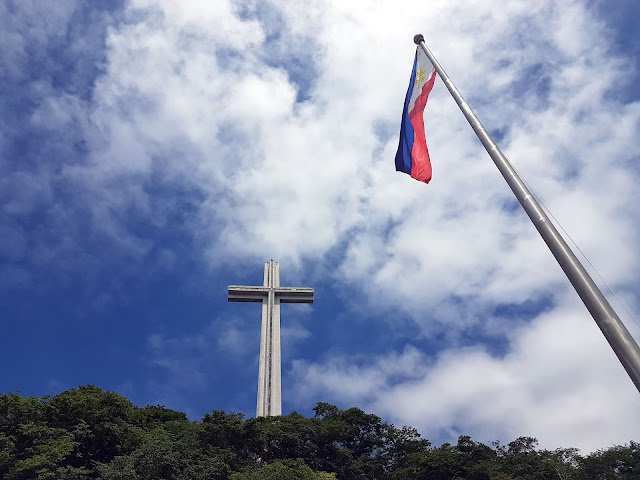 On our way to the Las Casas Filipinas on a company outing, me and my officemates swung by the Mt. Samat National Shrine. Also known as the Dambana ng Kagitingan, or Shrine of Valour, the monument was dedicated to the bravery and sacrifice done by the thousands of Filipino and American soldiers during World War II. Aside from the shrine, the soldiers were honored fowith a national holiday, every April 9th.

The monument is located near the summit of Mt. Samat, a parasitic cone of the nearby Marveles volcano. They were to hold the position for six months until reinforcements arrive from the US, and the bravery of the soldiers messed up the timetable of the Japanese forces invading the Philippines. The fortress island of Corregidor fell soon after the last stand in Samat.

It was almost high noon when we got there, driving from Manila through the North Luzon Expressway then going through Pampanga then to Bataan, to the town of Pilar. After paying the entrance fee we proceeded to the shrine, which comprises of an altar, and a colonade surrounded by an esplanade. At the side is the entrance to a museum. Looming above the shrine is the Memorial Cross, perched at the highest point of Mount Samat.

The cross, made of steel, concrete and marble, is 92 meters high from the base, and Mt Samat itself is 555 meters above sea level, so if you climb to the viewing gallery you will be treated to a vista of the surrounding provinces and Manila Bay. Scattered around the ground are various artillery pieces and guns, point towards the sea, eternally guarding the summit.

The Colonnade itself is clad with marble, and covered with sculptures depicting scenes of bravery by the soldiers. They were made by Napoleon Abueva, a National Artist, who also created works such as the Nine Muses, installed in the University of the Philippines Faculty Center. I went around the colonnade from end to end, amid the gaggle of visitors.


I was reading the narrative of the events during the war, which were set in marble slabs installed at each end of the collonade. The event led to the Fall of Bataan, causing the surrender of 78,000 Filipino and US troops to the Japanese Imperial Army. The prisoners of war were later forced to transfer to another camp, which became known as the Bataan Death March. About 10,000 of them died during this forced march.

At the end of the narrative is a tablet with an inscription that made me teary eyed, the last sentence of which reads, "Our mission is to remember."

How to Get There
Take the North Luzon Expressway from Manila, then exit to Subic-Clark-Tarlac Expressway (SCTEX). Exit at Dinalupinahan from SCTEX, then right to Roman Highway. Continue for 24 kilometers to get to the Mt. Samat junction. Take a left at the junction then continue for 6.5 kilometers uphill to the shrine.