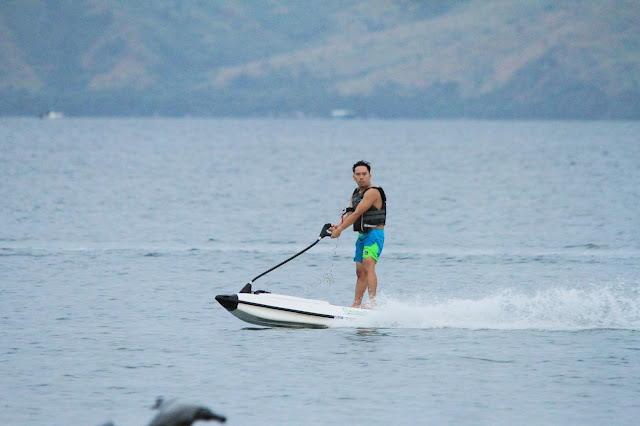 Pop quiz! What do you get when a jetski and a surfboard got married and had a baby?

That wonderful contraption is what made my weekend so much fun. Jetboards are self-powered  boards, made of fiberglass or carbon fiber material. Also known as electronic boards, they are shorter than the shortboards used in surfing. They are also thicker to accommodate the batteries and the engine, an impeller similar to a jet ski, which creates thrust that propels it forward. They are use for surfing even when there is virtually no waves to push the board.

Jutting out front is a semi-flexible cable with a trigger, which functions as the throttle. There is also a leash, like in surfboard, which you tie in your leg or arm. It is also connected to the throttle, which if separated will stop the engine. This is useful for when you fall from the board.

I made plans to go try it out in Networx Jetsports as soon as I word that they are available there. Vince, who taught me how to flyboard and hoverboard, gave me the rundown on how to operate and ride the watercraft.

There are similarities with the stance in surfing. I'm a goofie so  that's  the position I still take in riding the jetboard. The board is wider so there's a bit of latitude in foot stance, though. my preferred  initial position is kneeling, as it is easier to balance, with the throttle in the dominant hand. You can stand up after gaining sufficient speed, but abruptly stopping or reducing the speed can cause the board to lurch and throw you off balance.

You also have to engage the throttle at all times to keep the jetboard moving, so it might tire your forearm muscles after a while. I would switch between two hands to avoid this, carefully keeping my index finger on the trigger. Twisting the throttle mechanism to either side will turn the board, although it is less responsive than that of the jetski. It would also help to lean on the same direction you want to turn to make it turn faster.


After getting all the instructions from Vince I was able to turn it on and accelerate without a glitch, and soon after I was whizzing around Subic Bay at 35 mph, making circles around the buoys .

The three battery packs have enough juice to last for about 20-30 minutes, depending on how fast you go. I was almost always on full throttle the whole time so the full charge only lasted for about 20 minutes for me. Just a tip, save some charge for the trip back to the shore. But it is certain, just one session is not enough for me to get my adrenaline fix.

Networx Jetsports is located in Waterfront Road, Subic Bay Freeport Zone, Olongapo City. If driving from Manila, take the North Luzon Expressway all the way to SCTEX exit. Then Take the Subic-Clark Expressway to Subic. Networx is just beside Gerry's Grill restaurant.