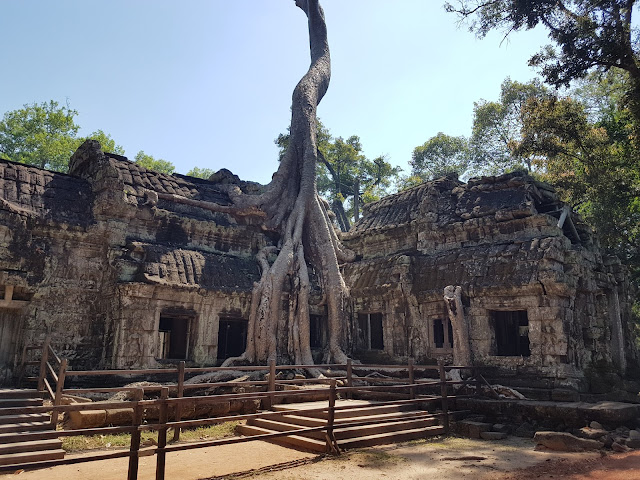 Day 2 of my trip to Siem Reap, Cambodia and today the main activity is to visit the temples (posts are reverse chronology) 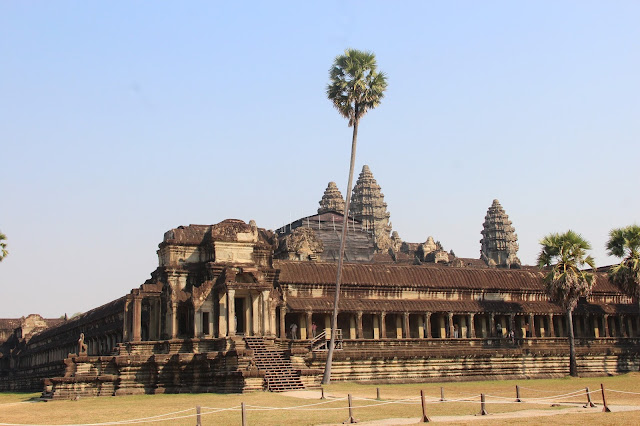 2:30 pm
After exploring Angkor Thom and Bayon we set out to the raison d'etat of the trip: Angkor Wat. I will create a separate post for it, here. 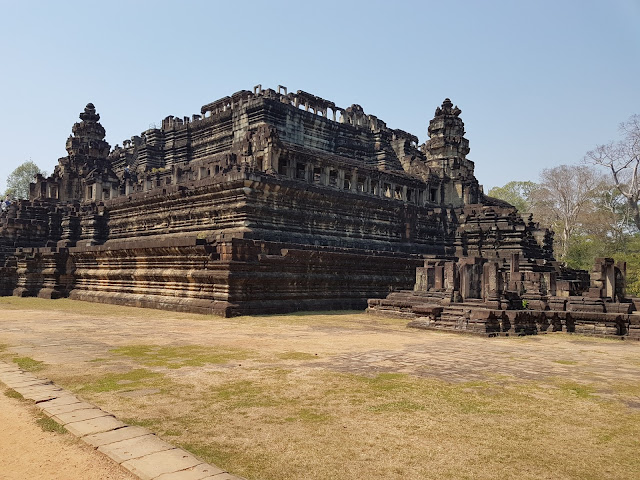 1:45pm Ankor Thom
After lunch we proceeded to Ankor Thom, which means Great City. The complex, which was the last capital of the Khmer empire, is composed of several large ruins, and on its center is the temple callled Bayon. 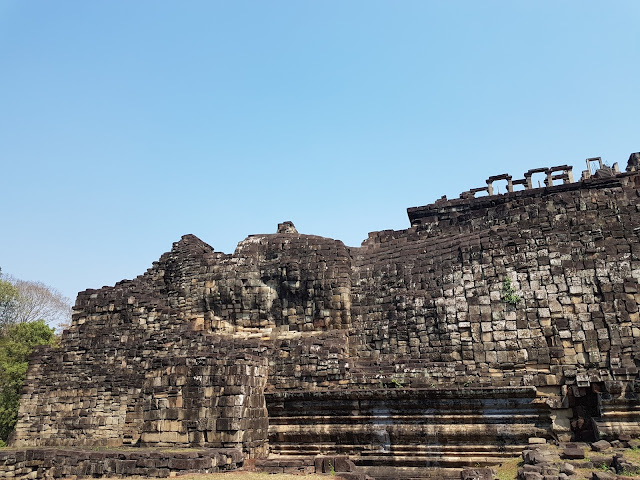 Among the ruins I visited is the Baphuon. It was a temple-mountain originally dedicated to Shiva but it was later converted into a Buddhist temple. A sleeping Buddha was later built on its western side.

I also visited the Terrace of the Elephants, and the Phimeanakas, which was a three-tiered pyramid built as a Hindu temple.


1:15pm
I had my late lunch at a small eatery in front of Ta Keo temple. I was famished and thirsty so no adventurous food. I picked an omelette filled with minced pork, and just plain bottled water. 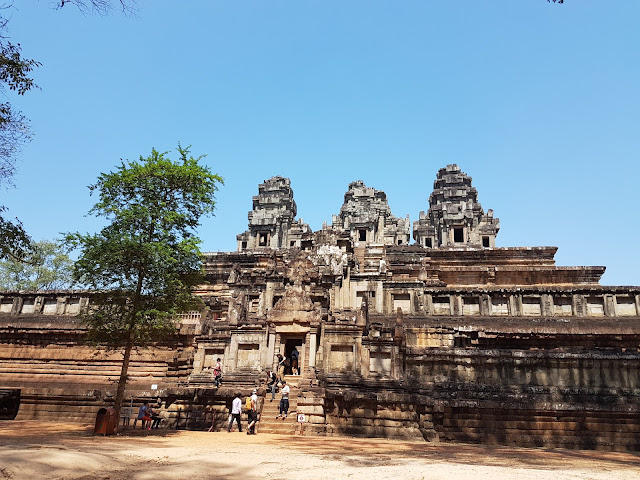 12:30 Ta Keo Temple
Ta Keo Temple is the next on the itinerary. This one looks like a pyramid - and is said to be the first to be made out of sandstone. I have to climb several steep stairs to get to the top. 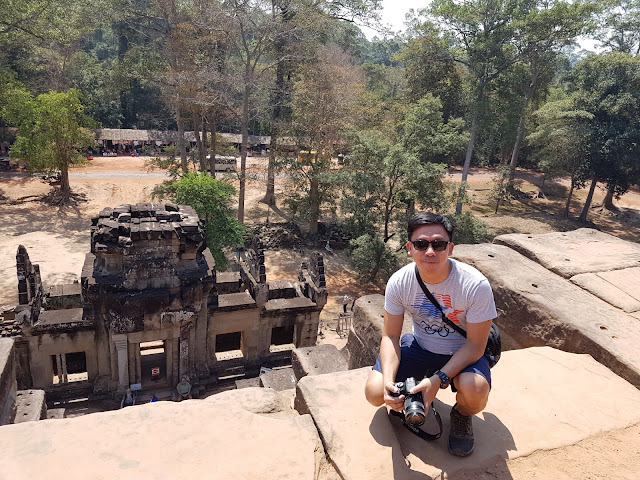 11:30
I was mad at Kim because I couldn't find him anywhere. I was done exploring Ta Prohm and when I arrived at the West Gate he was nowhere to be found. I went back inside and ended up going back to the East Gate and back, before I found him.

10:45 Ta Prohm
Ta Prohm (above pic) is the next temple that we visited. This was made even more famous when it was used as a location for the film Tomb Raider.  I was half expecting Lara Croft to materialize and start shooting grave robbers when I was at the temple. 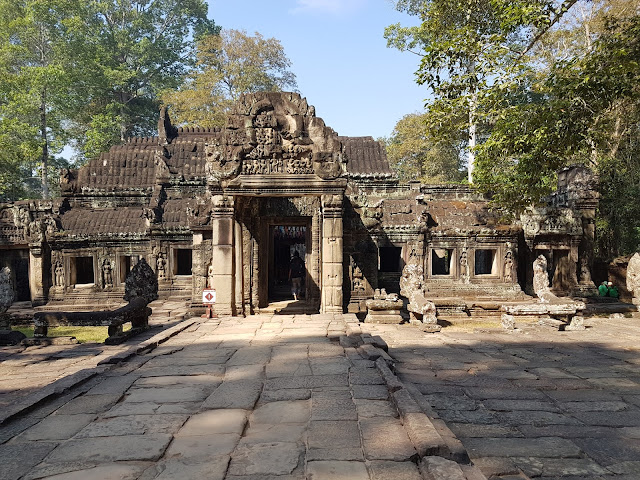 10:00am - Banteay Kdei
We are doing a reverse itinerary - Angkor Wat will be the last so I will visit it in the afternoon. The first stcop is Banteay Kdei - the Citadel of Chambers - built in the 12th century.

9:40 am
We swung by the ticket office to get my pass. They substatially increased the price - $37 for 1 day. 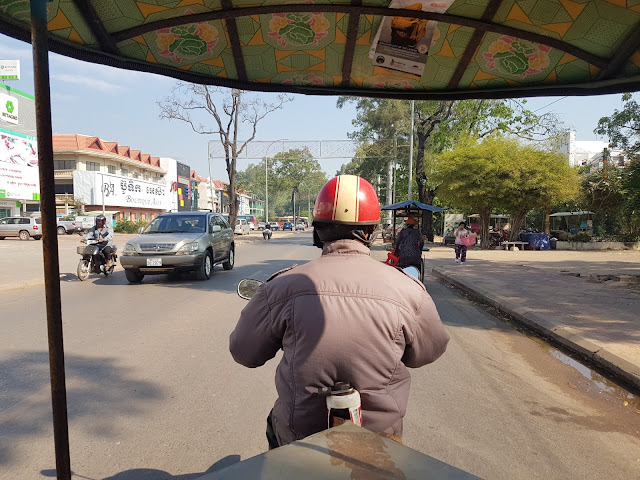 9:15am
Kim, the driver of the tuktuk (remork) who drove me from the airport last night, will be my guide/transportation for today. He picked me up at the hostel after I had breakfast.