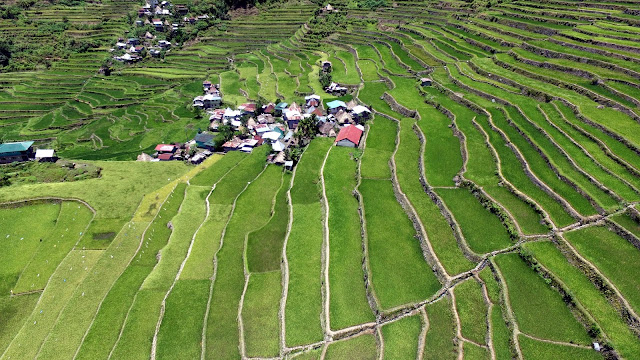 This is probably the first tourist spot that I learned about, as did millions of Filipino kids reading their Sibika textbooks. At the top of this list of "magagandang tanawin ng Pilipinas "(beautiful sights of the Philippines) is the rice terraces, which is located in the northern part of Luzon. It's also one that which I kept on putting off to visit. To remedy the oversight I booked an overnight bus trip to Banaue and finally added the Ifugao Rice Terraces to the UNESCO World Heritage sites that I've been to.

There were five sites in Ifugao that were included in the UNESCO inscription, and I visited three: Batad, Bangaan and Hunguduan (the two I missed were Mayoyao and Kiangan).  It is believed that these rice terraces were constructed around 2000 years ago, and if put end to end, will go halfway around the world. I also remember my history professor pointing out that it is the only ancient megastructure built without slave labor.


These five were distinct from the other rice terraces located in the main town center of Banaue, which were build only about 200-100 years ago, and were not included in the UNESCO inscription (will cover those in a separate post).

After a nine-hour bus ride from Manila I finally arrived in the town of Banaue, in the province of Ifugao. After paying the environmental fee and arranging for my transportation - a tricycle driven by a local named Jojo - we set out to the Saddle, which is the jump off point to the village of Batad. It was a 45-minute drive to the Saddle through landslide-prone roads, and another half an hour hike to the village.

As we approach Batad, I started to get a glimpse of how massive the rice terraces are - carved from the mountainsides almost all the way to the top, crowned  by a cluster of trees that act as watershed for its innovative irrigation systems. Near the foot of the mountain was the old village, punctuated by the distinctive roofs of the native houses.

I decided to get a room at the village where I would stay overnight. My  hostel is located on one slope facing the amphitheater, offering a great view from window. Also acting as my guide, Jojo suggested that we explore the Batad Amphitheater on the first day, plus a side trip to the Tappiya Falls. We got going after after checking in and getting some breakfast. I also brought along my drone.

As the name suggests, the Batad terraces does look like a giant version of an amphitheater carved on the mountainside, with green stepped seats delineated by massive rock and mud walls, carefully tended by the Ifugaos over the centuries. We hiked along the trails about a foot and half wide, careful not to tip over and careen over the mountainside. We met some hikers along the way, as well as some locals tending the planted rice, which will be ready for harvesting in a few weeks.

From there we went down to the waterfalls and spent a few hours there, cooling down after a long hike. We only decided to go back when there was a looming rain above us. After it cleared we went back to the hostel, and parted after a late lunch. Jojo and I decided to explore the rest of the clusters the next day.

The next day Jojo arrived early and suggested that instead of climbing the Awa View Deck in Batad as originally planned, we explore the rest of the clusters instead. Bringing a motorcycle without a sidecar this time, I hopped into his bike then we drove to Bangaan, another village in Banaue with a UNESCO-inscribed terraces.

The drive was pleasant, but I cannot help noticing that several sections of the roads going there were obstructed by piles of rock and dirt. Jojo said that those were landslides that happened recently.


The Bangaan Rice Terrace is not as massive as Batad, but it is very picturesque, with the steps rising slowly from a flatter terrain going from one side of a mountain to another, with the village located at the meeting point at the lowest part. We didn't go down to the village, but instead admired the landmark from the side of the highway looking down.

From Banggan we again drove back to Batad, then to Banaue town proper. From there we visited the Viewpoint, where we can see the terraces that are familiar to most, but which are not part of the UNESCO cluster. The one we wanted to visit is located in Hungduan, the town next to Banaue, about an hour drive away.

The Hapao Rice Terraces is somewhat similar to Banggan, not as high and massive as Batad, but just as picturesque. There was a crane/pulley system from our viewpoint, used by the villagers to send supplies to the locals below. The terraces also rice slowly along the valley bordered by several mountains, culminating in the sides, layered like giants steps. I wanted to ride the car in the pulley, but as it was Sunday, there was no operator around.


We passed several hamlets going to Hungduan, one of which hosted a wedding. Jojo asked me if I wanted to crash the party but I declined. We got caught in the rain on the way back to Banaue, so we stopped at a house to seek shelter. The owner of the house invited us in for lunch, and even showed me their clan's treasures - several spears that denote social status, and their antique bulul, the statues of rice gods that they believe are guarding their rice crops. I was so thankful for the experience. We got back to Banaue after, from where I got a bus back to Manila.

How to Go to Banaue
There is an overnight bus going straight to Banaue from Manila, the Ohayami Transit. They have 2 scheduled trips daily (three during peak season) from Manila, at 9:30pm and 10:00pm, with ETA at 7 am the next morning. The trips back to Manila from Banaue are scheduled at 7pm and 7:30pm, daily.

Fare is PhP450 one way, and you may purchase seats in advance online at their website: http://ohayamitrans.com


There are many hostels and hotels in Banaue town proper as well, if you are not planning to stay in Batad. You can ask the local tourism office for recommendations.

Guide/Transportation
For a big group I'd suggest to hire a van, which will cost around PhP4000 for one day. The motorcycle with a sidecar that I hired going to Batad cost me PhP 800, and I added another PhP 700 to take me to Banaue view point, Bangaan and Hungduan. You may call Jojo at +639262901933, or get one at the tourism office. The driver may also serve as your guide, so tip generously. 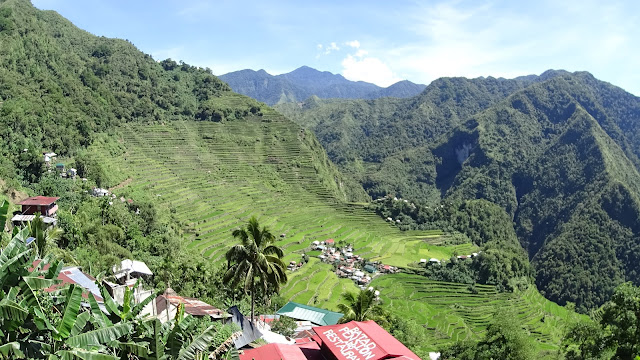 
Visitors are required to pay an environmental fee of PhP50 upon arriving, at the tourism office. Water is expensive in Batad, so buy bottled water (and other supplies like snacks) in Banaue town before going there. Mobile phone signal is spotty in Banaue, and non-existent in Batad, so plan accordingly. It may be the best time to get a digital detox. Try the local food, especially pinikpikan, unless you're a member of PETA.
Banggaan Batad Hapao Hungduan Ifugao Rice Terraces Philippine culture Philippines rice terraces Rice Terraces of the Philippine Cordilleras UNESCO World Heritage Sites