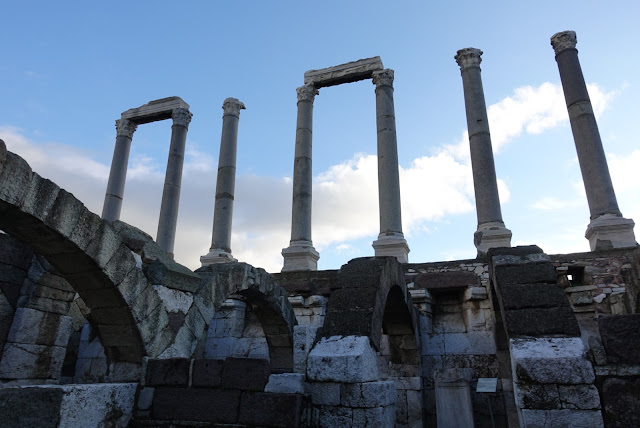 Fourth day of the trip - Izmir and Selçuk.

Boomerang hostel, 8:00pm
Just kicking back in the hostel, warming myself with a corn and crab soup and sitting near the fireplace. 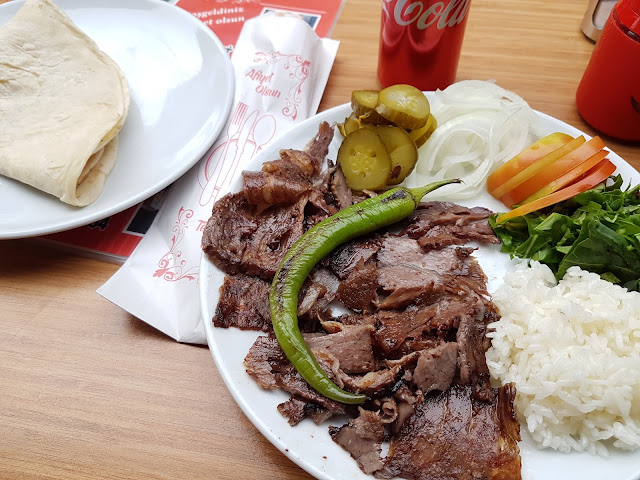 Selçuk, 5:30pm
After the castle I went to the town. I am loving the vibe here. I bought some postcards, and eyed some Roman coins on sale at a store but I wondered if they are authentic so I didn't buy any. Also they are kind of expensive - 20 lira each.

I ended up in a doner shop. I ordered lamb kebap as I was famished. 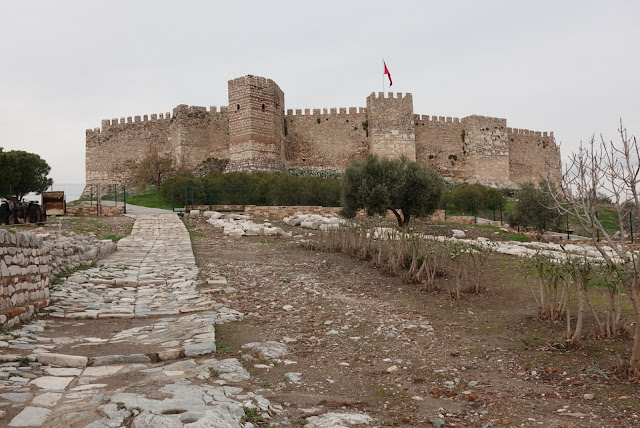 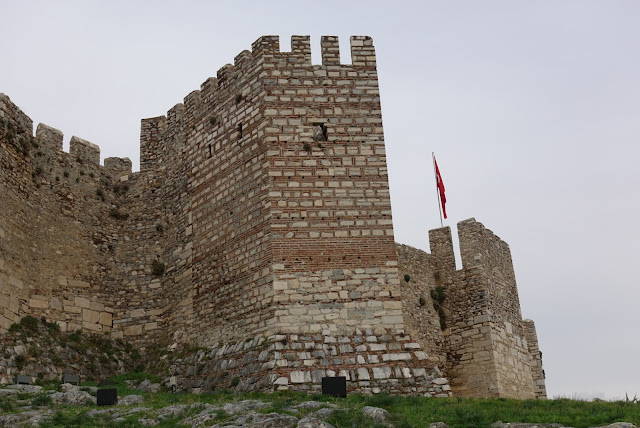 
Adjacent to the Basilica is the Ayasoluk Castle. It was built on a hill where St. John was said to have written the gospels. The castle was built by the Byzantines. 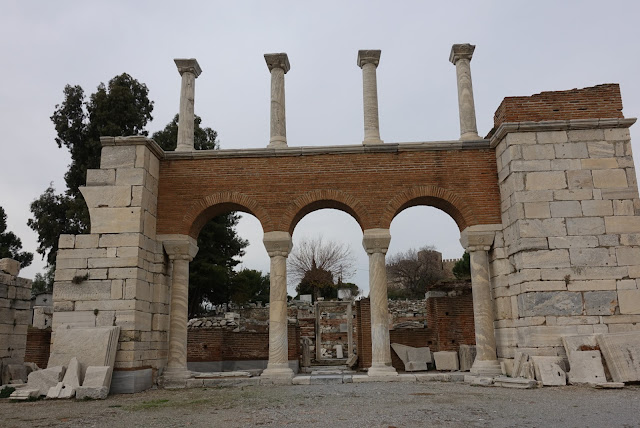 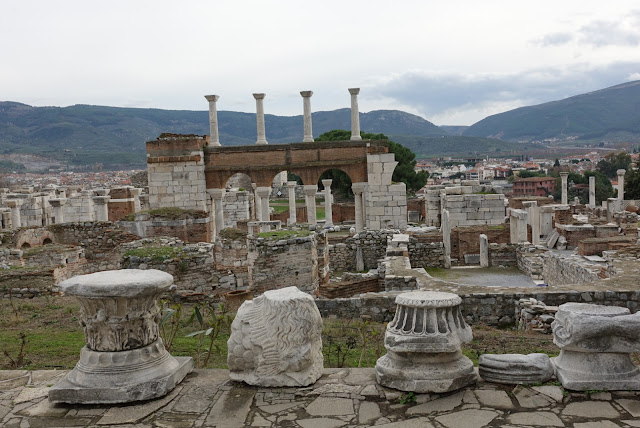 The first landmark that I visited (very close to the hostel too) was the Basilica of St. John. The church was built by Emperor Justinian in the 6th century over the tomb of evangelist John, who wrote the 4th gospel and the Book of Revelation. 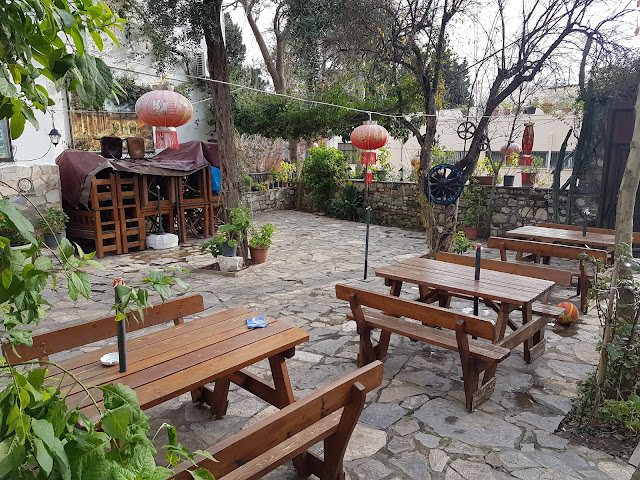 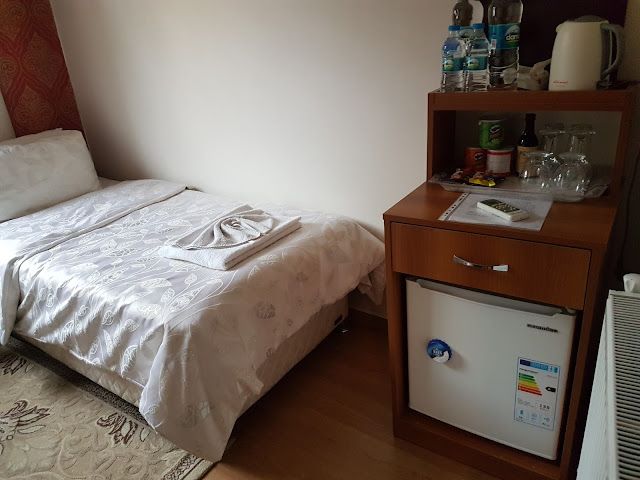 Boomerang Guest House, 3:20pm
I was able to locate the hostel, just a short walk from the train station. I met the owner - a Chinese woman, who got me settled in my room. I am loving the place - my room even has a small ref and mini bar - unusual for a hostel! She also helped me book a tour for Pamukkale for tomorrow and to Ephesus the day after. 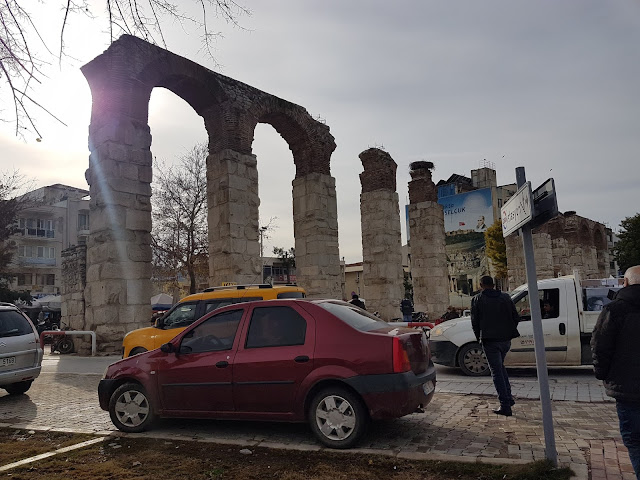 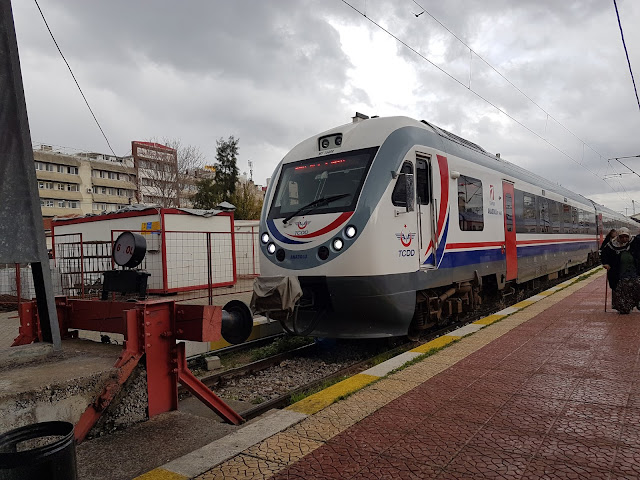 1:40pm
Finally the train arrived, and I'm off to Selçuk. 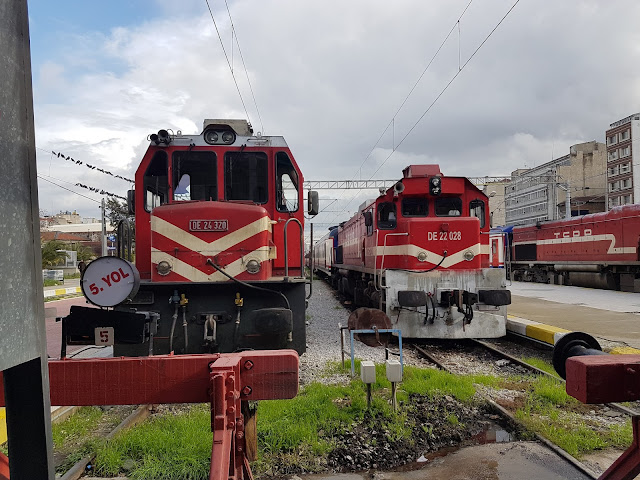 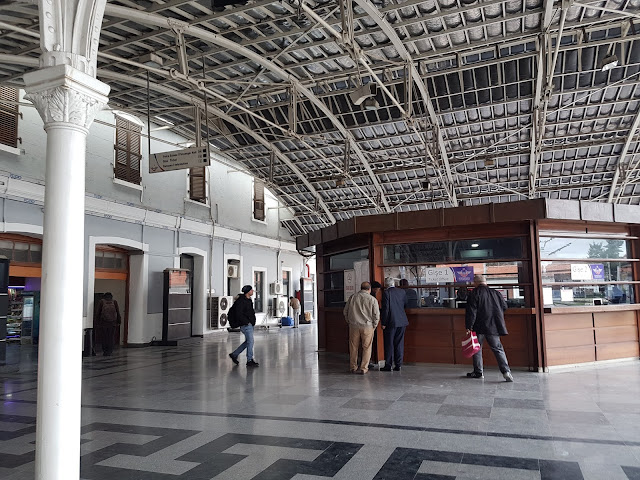 Basmane Gar, 12:35pm
I took a cab from the hotel to the Basmane train station. I will take the 1:40pm train from here to Selçuk.


Hilton Izmir, 11:45
Back at the hotel, and will be checking out soon. Then to a bus station to go to Selçuk. 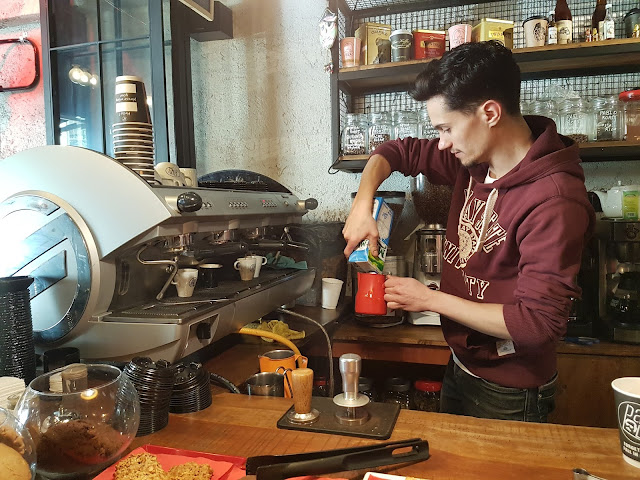 Pablo Artisanal Cafe, 11:15
On the way back to the hotel I dropped by a cafe to get my caffeine fix. Macchiato, as always. 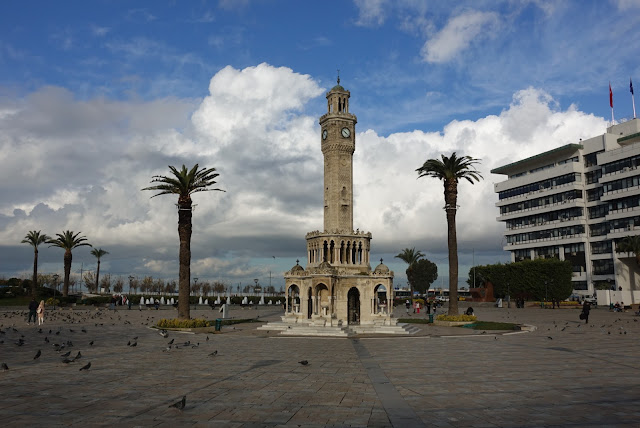 Clock Tower, 10: 45am
After the agora I decided to go to the clock tower. The Kafedesi castle was just up the hill but I thought I'd forgo it (I dont want to aggravate my knee climbing up).  Google Maps recommended a route fro agora to the Clock Tower that took me through a market, whicb is nice. 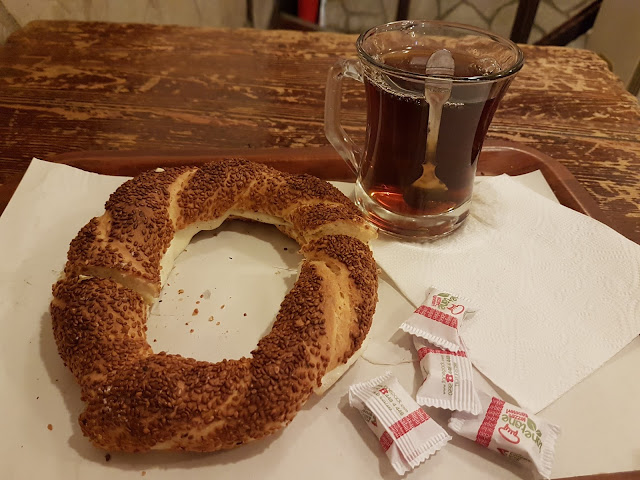 I stopped in one of the shops to get breakfast - tea and a bagel-like btead with melted cheese. I also went to a pharmacy (apotheca) to get contact lens solution. 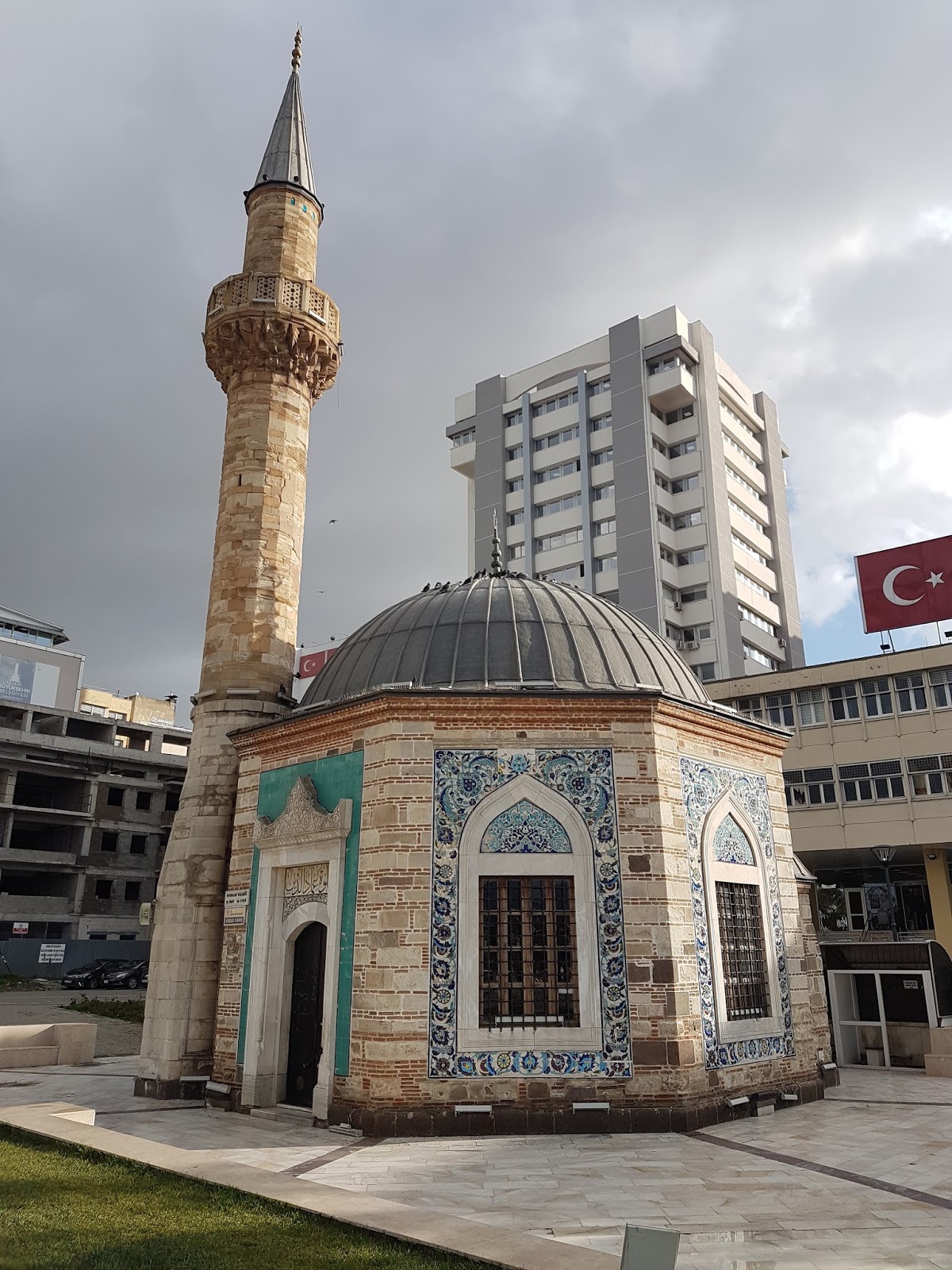 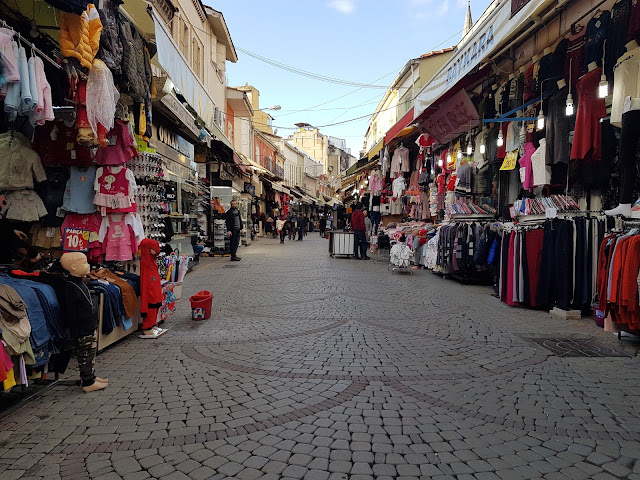 I explored the clock tower and up to the pier. Nice to see the Aegean in a nicer weather. 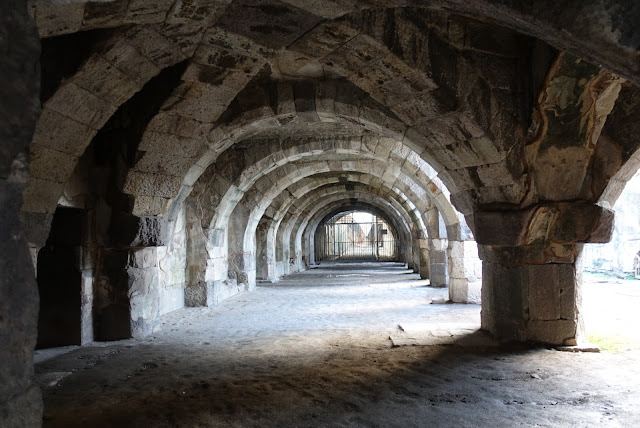 Agora Open-air Museum, 9:30am
The ancient agora of Smyrna (and ancient name of Izmir) was built in 4 BC but was destroyed in an earthquake. It was rebuilt by Emperor Marcus Aurelius. 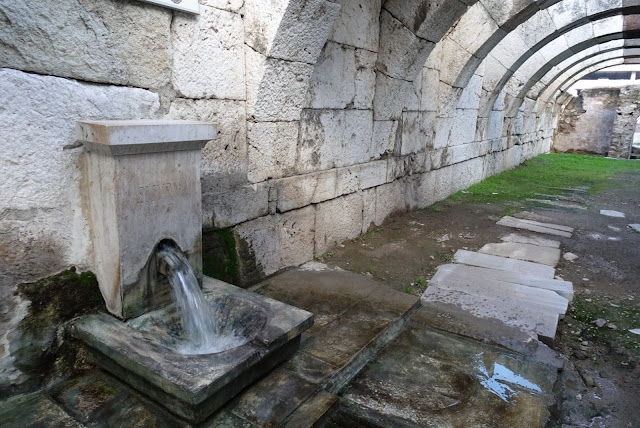 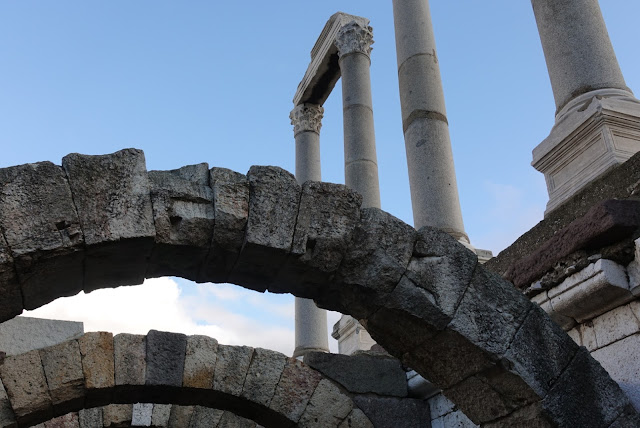 I was the only visitor when I got there. I went around the complex, camera at hand. It was just amazing to see something that I used to read in the history books (and as a history major, that means a lot).

9:00am
I started to pack and had a shower. I went down, deciding to go to the Agora first. It will be about a kilometer from the hotel. 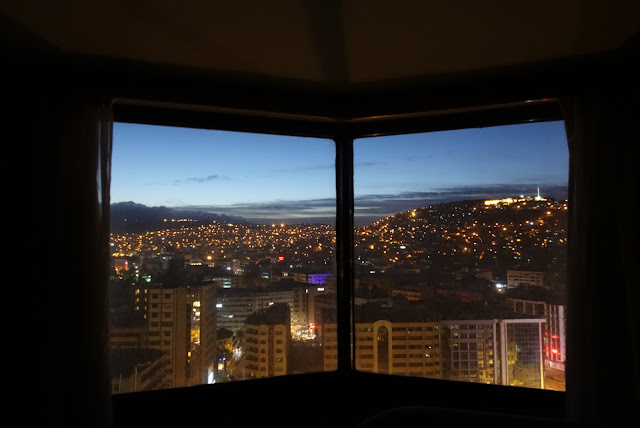 Hilton Izmir, 7:00am
I woke up early but I didn't get up right away. It was still dark outside and the temp is like 8°c so I stayed in bed longer.