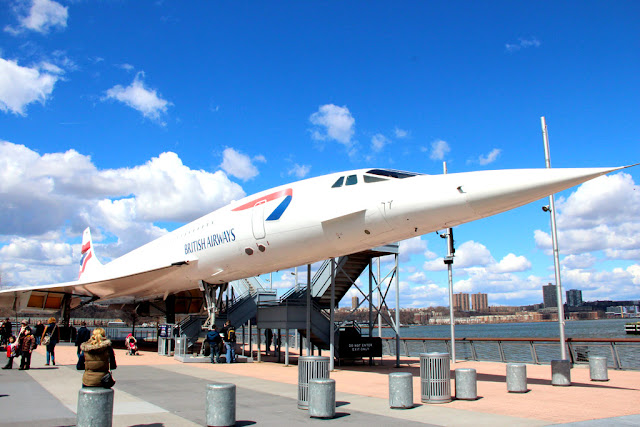 When I was a kid and started dreaming of flying to distant lands, one of the planes that I imagine myself embarking on is the Concorde - the supersonic jetliner that's probably the most iconic of all civilian aircraft that ever flew. Debuting in 1969, it served destinations such as London-New York, Paris-Rio de Janeiro, and London-Singapore. It also visited Manila in 1976.

The aircraft can carry 100 passengers, and can reach an altitude of 60,000 feet. The pointed nose that droops when landing, the double-delta wings attached to the white fuselage, and the fact that it can fly twice the speed of sound made it one of my favorite planes.

Flying on it is no longer a possibility, since it was retired in 2003, just a few years before I started backpacking to other countries. Besides, I heard that the ticket costs an arm and leg, so that also made it remote from the start. Still, it represented the dream of flight for me, and seeing it in person is the next best thing. That's what I just did when I visited the Intrepid Sea Air & Space Museum in New York a few weeks ago.


There were only 20 built, with fourteen in commercial service.The Concorde on display sits on Pier 86, right next to the USS Intrepid. It was on loan from the British Airways, one of the two airlines in the world that operated the aircraft (the other being Air France, aside from others that wet lease the aircraft, such as Singapore Airlines and Braniff).

In fact, this aircraft, with registration number G-BOAD,  used to have a SIA livery, when it served the Singapore-Bahrain route in the 1970s. It flew for the last time in November 2003, from Heathrow to JFK Airport in New York. By a great coincidence, my 1:400 die-cast model has the same registration number as this one.


The aircraft was smaller than I imagined it to be. I spent a long time walking underneath its fuselage, admiring its graceful lines and gawking at its afterburners and the angular air intakes under the delta wings. One of its powerful Olympus 593 engines is on a separate display, encased in a glass box beside the plane, under the shadow of the USS Intrepid.


There was a guided tour where you can go inside the cabin and see the flight deck, but I was not able to get one. Still, I felt that seeing this plane (and the Space Shuttle) is well worth the $20 for the ticket that I paid.

How to Get There
The Intrepid Sea, Air and Space Museum is located at Pier 86 on Manhattan's west side, on 12th Avenue and 46th Street. You can take the subway to 42nd Street and walk or take a M42 bus to 12th Avenue.
Useful Info:
The museum is open daily from 10am to 5pm during fall and winter, and from Mondays to Friday during spring and summer, and until 6pm on Saturdays and Sundays and holidays. Entrance fee is $20 for adults, $10 for children. Guided tour for the Concorde would cost an additional $24.