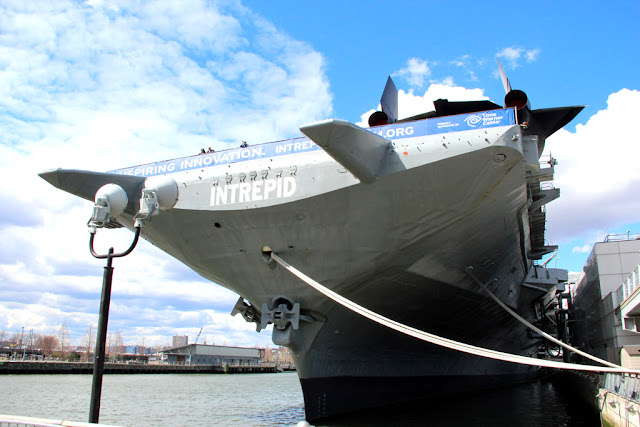 One of the most unique museums that I've been to is the Intrepid Sea, Air & Space Museum, in New York. What's remarkable about this one is that the museum itself was actually a decommissioned  aircraft carrier of the United States Navy - the USS Intrepid.

The museum, to say the least, is a must for aviation enthusiasts like me. This is one of the reasons why I still included the Big Apple on my third trip to the US; I missed this one the last time.

The ship - an Essex-class aircraft carrier - figured prominently in naval history. Commissioned in 1943, it saw action during the second World War, particularly in the Battle of Leyte Gulf in the Philippines, and in theater operations in Okinawa and in the Marshall Islands. It is interesting to note that one of its sister ship was named USS Philippine Sea, and another, USS Leyte.

It was decommissioned after the war, but was refurbished and reactivated, and it saw action again during Cold War and the Vietnam War.

In between wars, it also became the recovery ship for the Mercury and Gemini space missions, helping retrieve the Aurora-7 and the Gemini 3 spacecraft after splashdown. It was decommissioned in 1974 and was destined to be scrapped until it was rescued to become a museum ship, as it is today. In 2001 during the 9/11 attacks, the Intrepid also served as the temporary headquarters of the FBI.

Berthed in Pier 86 on Manhattan's west side, the museum ship has an impressive collection of aircraft and spacecraft. Most notably it is home to the Space Shuttle Enterprise, a Lockheed A-12 spy plane, and, on loan from the British Airways, a Concorde. A 1960s ballistic missile submarine, the USS Growler, is also docked in Pier 86 and is included in the museum collection. I'd be blogging about those four separately.

Aside from a occasional glimpse of carriers docked in Manila Bay and what I see on television and movies, this is actually my first time to see an aircraft carrier up close. The size is immense, even if this was an WWII -era ship. After going through the security checks at the entrance I first walked along the pier to observe its size, and it was a long walk to go from bow to stern. Towards the far end of the pier was the Concorde, and if you look up at the stern you can see the space shuttle. The shuttle pavilion was closed when I visited the museum because of the damage caused by Hurricane Sandy, but I can still see the Enterprise pretty well from that vantage point.

The exhibits are divided into six areas: the flight deck, the hangar deck, gallery and the third deck, the shuttle pavilion (will open in spring 2013), the USS Growler, and the Concorde.


The flight deck is where the planes take off and land when the ship is operating. The size of several football fields, the flight deck holds the majority of the aircraft that the museum has on display. On here you can see the F-14 Tomcat, made popular by the movie Top Gun, the Cold War-era A-12 spyplane, an F-16 Eagle, a A-6 Intruder, and several helicopters including a Sea King and an AH-1H attack helicopter. There is also an Israeli Kfir fighter jet in this group.


Displayed at the other end of the flight deck are foreign aircraft, such as a Soviet-era MiG -17 and a MiG-21, a French Super Etendard,  a British Av-8B Harrier jump jet, and an Italian Aermacchi MB-339. On the stern but closed to the public, you can also catch a glimpse of the shuttle Enterprise's rear section.

From the flight deck you go down using the elevator to the cavernous hangar deck, where the aircraft are usually stowed for maintenance and repair. In the museum ship, the hangar deck was converted into another pavilion where several aircraft, spacecraft and memorabilia are displayed.

On this section you can see World War II-era fighters and bombers, a replica of the the Gemini 3 capsule that was retrieved by the Intrepid in 1965 after it came back from orbit. An original Soyuz TM-6 re-entry capsule can be found here too.


Aside from the hangar deck, you can also explore the third deck of the ship, where you can find the berthing areas - where the sailors and pilots sleep and eat - as well as the combat information center. You can also climb up to the island, the structure that you can see protruding from the flight deck, where the command center of the carrier is located. Here you can see and touch some of the instruments used to operate and control the ship and its aircraft.

All in all, I really enjoyed my visit to the museum. In just one trip I was able to fulfill my boyhood dream of seeing my favorite flying machines, the F-14 Tomcat, the space shuttle and the A-12 spyplane. This museum is highly recommended for aviation geeks like me.