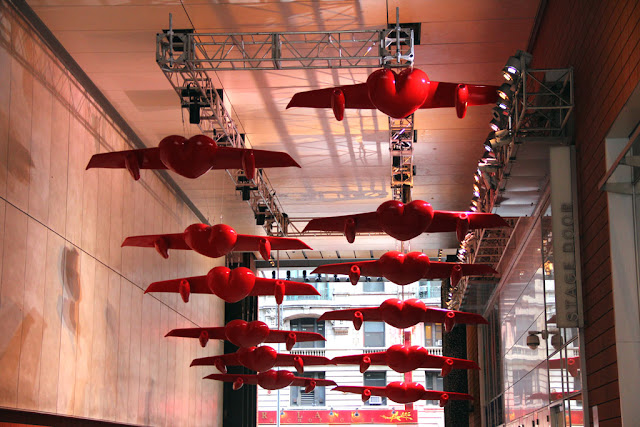 I saw this art installation by chance, when I was walking along 6th Avenue in Manhattan going to Times Square.What drew me into it were the red-colored planes, hanging over the pedestrian passageway between West 42nd and 43rd Streets called Anita's Way. At first I thought they were flying crimson derrières about to bomb North Korea.

The art installation is called Goodbye My Love (Adios Mi Amor), and it was created by the Cuban contemporary artist Esterio Segura.

It is composed of 12 red planes with heart-shaped fusilage. Apparently the artist chose to use the airplane, a symbol that carries different meanings around the world, and fuse it with another one - the red heart. Goodbye My Love is to evoke the experience of a feeling and the experience of departure and going away [1], a feeling that people in contemporary relationships go through when they are to be separated from each other [2]. As a constant traveler, that resonates to me in many different levels. 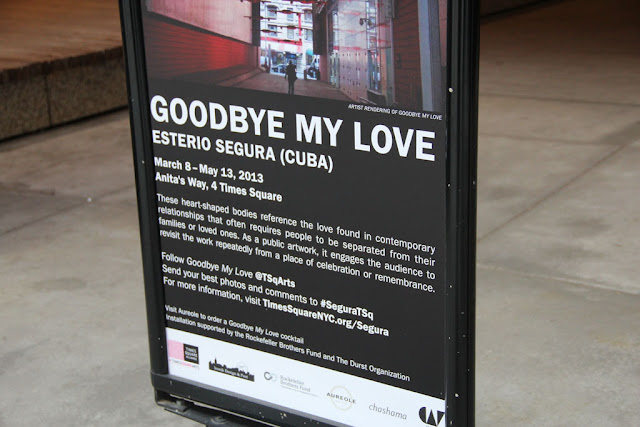 The art installation was previously installed in Terminal 3 of Jose Marti International Airport in Havana, Cuba.  Part of the ongoing Times Square Arts Initiative that aims to bring art to the visitors of Times Square, the exhibit opened in March 8, and will remain there until May 13, 2013.

How to Get There
The installation can be found in Anita's Way, a pedestrian walkway that connects the Conde Nast and Bank of America buildings in West 42nd and 43rd streets, between 6th Avenue and Broadway in Manhattan.
Anita's Way art Esterio Segura Goodbye My Love Manhattan New York Times Square