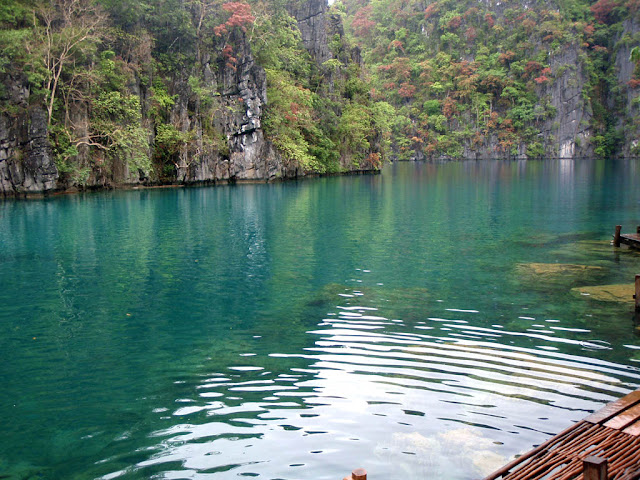 With temperatures in the metro climbing to as high as 37°C, it is hard not to think of destinations where you can just sit back and cool down with a fresh breeze blowing on your face while you soak your feet in fresh ice-water, or where you can dive-bomb into the water to combat the early signs of global warming.

For this week's In Pictures, we go to Kayangan Lake, in Coron, where we can do exactly just that, and more.

Kayangan Lake is a freshwater inland lake, located just inside Coron Island in Palawan. The lake is considered sacred by the indigenous Tagbanwas who live in the island. The island itself is protected, and only the Tagbanwas can live there.

Bounded by sharp karst formations and jagged limestone cliffs, the lake is accessible through a trail going up from the beach. The trek takes about 10-15 minutes. Along the way  you'll be accorded with magnificent view of Coron cove, and you can also visit a small cave halfway through the hike.

Once you reach the lake you can find a spot where you can put your belongings. There's a wooden boardwalk built along the rim of the lake. You can sit in there and dip your feet in the water and let it suck the summer heat out of you. You can also let the fish nibble at your feet.


You can bring your snorkeling gear with you and skin dive. Below the lake is a scene taken from  an alien world that you only see in sci-fi movies. Jagged limestone rocks jut out of the lakebed like tiny skyscrapers, bathed in an eery green glow that gets dimmer as you dive deeper.

Kayangan is reputed to be the cleanest lake in the Philippines. As such people are advised not to put on sunblock or insect repellants before dipping in.

There are other freshwater lakes in the island as well but those were closed to the public, giving them an almost mythical reputation.


How to get there:
Getting to Coron is easier these days. You fly from Manila to Busuanga, then take a van from from the airport to Coron, 150 pesos each way. The route is serviced by many airlines, including Cebu Pacific, PAL Express, Zest Air, AirAsia and SEAir.

From Coron town, you can take a 20-minute boat ride to Kayangan. For a general guide to Coron, go here.