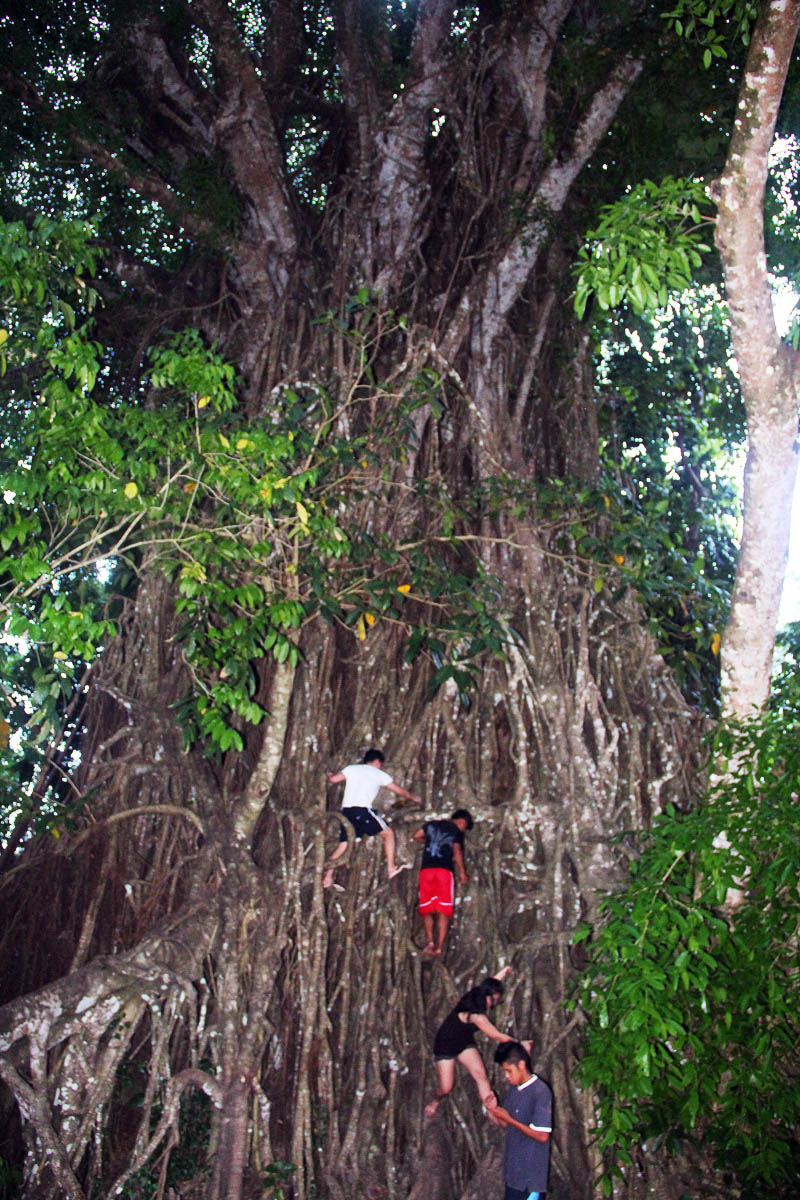 I was a bit skeptical at first when I was told by a friend that one of the sights not to miss when visiting Baler is the Millennium Tree. From the name itself I thought that it's just another old tree which the locals named using hyperbole. My interest got piqued a bit when I read that visitors can actually climbed on it. So I said, OK, I'd try that, since it's been long since I've climbed a tree myself. I suggested it to my friends, James, Aroma, Sigrid and Randy when we arrived in Baler. We set out to it right after we visited the Mother Falls in Dimutabo.

It was almost sunset when we, on two tricycles that we hired, arrived at the Balete Park, in Maria Aurora, a town adjacent to surfing town of Baler. The ride almost took more than thirty minutes, and I was even feeling a bit tired while on the way.

I did not expect the enormous size of the tree when we finally saw it. The tree, we were told, was about 200 feet high, and about 49 feet in diameter in its widest. It is reputed to be the largest of its kind in Asia. To give you a scale of how large it is, see the top photograph. After paying a visitor's donation to the one tending the place, a group of young lads approached us and told us that we can climb all the way to the top, with their help, of course.

Balete trees, also known as strangler figs, figure so much on traditional Philippine folklore. Normally they don't grow as large, but balete would usually wrap itself around other trees and strangles them, then taking over the trunks as the hosts dies, using it as a sort of scaffolding as it continues to grow. The one in Balete park is estimated to be around 600 years old, not quite millennial, but still very old.

Filipinos, especially those in the provinces, believe that the trees harbor spirits and supernatural beings, such as dwarves, tikbalang (a creature with a horse's head that smokes giant cigars), or kapre, another tree-dwelling creature that loves playing pranks on unsuspecting people. I remember stories about them during my childhood, so I wasn't surprised to find myself muttering "tabi po," which is a sort of apology to offer to spirits when you inadvertently invade their territory, when we approached the tree. It was laughable but old habits really die hard.

We entered the space between the roots that resembled a small cave opening or a certain anatomical feature, framed by dangling roots and branches the size of a child's arms. Sinewy trunks and roots twist around it, like a giant thread spun with gargantuan fibers.   Only me, Aroma and Randy proceeded to climb, with James and Sigrid staying put. My guide went ahead of me, asking me to hand him my camera as he instructed me where to put my foot as I climb up the roots, through the hollow part of the trunk and around it.

The climb up was tedious and slow, but I tried to keep myself alert to avoid the unfortunate brush with gravity and the ground below. I was only wearing flip-flops,  which also lent another degree of difficulty. Aroma and Randy were following behind me, their guides busy snapping pictures as they egg them to climb up.

I felt like it was a small victory when we reached the top. I'm not usually afraid of heights but I felt a bit of vertigo when I looked down. After all, I was up there with no safety harness, in a place where cigar-smoking monsters dwell, who'd punk'd me for fun. After looking around a bit, I signaled to my guide that I want to go down already.

We used a different path going down, through the outside of the tree, clambering down gingerly, using our hands and feet to balance and move down. I was only able to breathe a sigh of relief when I was able to plant my flip-flops on the ground, 200 feet below the canopy.

How to Get There
The Millennium Tree is located in Belete Park, Barangay Quirino, in the town of Maria Aurora, about 30 minutes from Baler. Tricycles may be hired to bring you there.

Useful Info
There is no fixed fee for the guides, but we gave them about a hundred pesos each for their effort.
Aurora Balete Park Maria Aurora Millennium Tree Philippine culture Philippines