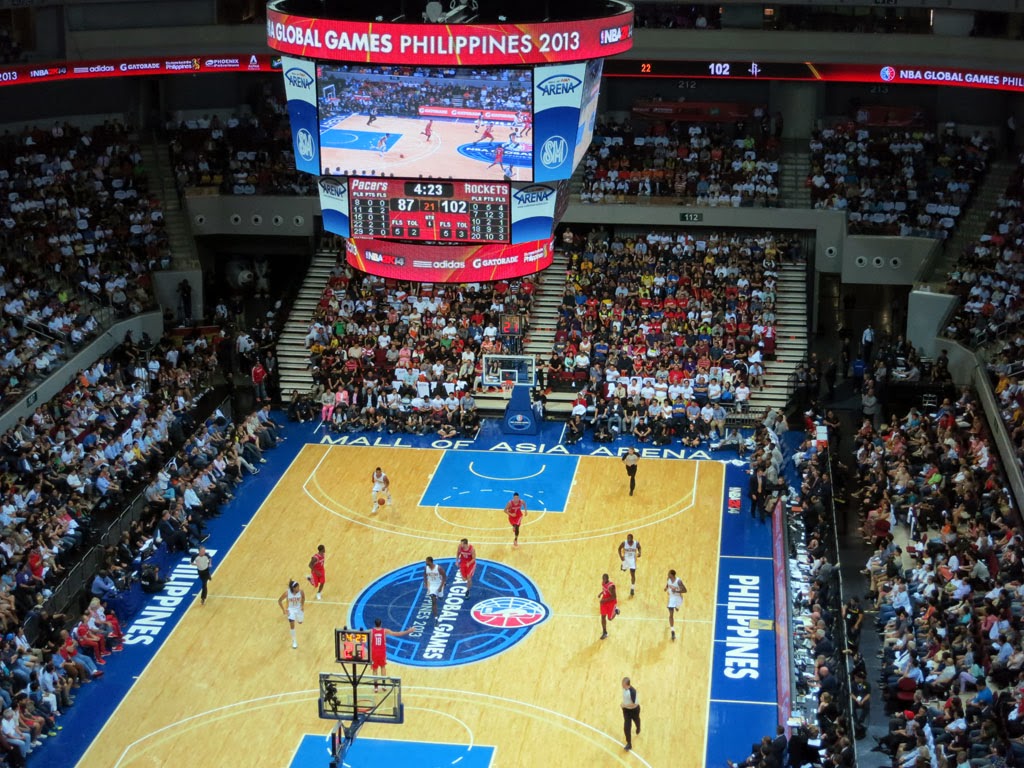 Months of preparation and coordination was put in jeopardy when a sudden downpour drenched the streets of Manila which flooded the streets and snarling the already-notorious traffic. We were on our way to the Ninoy Aquino International Airport Terminal 3 to pick up my brother, who was going to accompany to a sports spectacle that we've been waiting for a long time in Manila: an NBA game.

The pre-season game, announced months ago as part of NBA's 2013 Global Games series, was to be between the Indiana Pacers and Houston Rockets. I've bought the tickets as soon as they were announced on sale, and I have cajoled and basically bullied my brother to get his plane tickets to Manila so we can watch the game here. Their flight was rescheduled twice already, and the plane landed about an hour before tipoff. The flood caused by the sudden downpour made our trip an hour longer than usual, and we arrived at MOA Arena, the venue of the game, just as the second quarter ended.

The spanking new stadium was, expectedly, almost full to capacity. We made our way to our seats, high-up the 16,000-capacity arena, and settled down to the action. This was my second time to watch a live NBA game, the first one in Madison Square Garden between the New York Knicks and Pacers, but this is the first time that an NBA game was conducted in the Philippines - a decidedly basketball-crazy country. It was also a first in Southeast Asia.

Being a Los Angeles Lakers fan I was a bit on the fence between the two competing teams, although I caught a bit of Linsanity myself so I may be leaning for the Rockets to win. Curiously, Jeremy Lin was with the Knicks when I saw that game in New York.


The score was not very close even when we arrived at half-time, favoring the Rockets for more than 10 points. The Pacers tried to close the gap as the game progresses, but to no avail. Lin won the hearts of many more basketball fans with his on-court prowess, helping his team rack up points to widen their lead. It ended as a blowout, with the Rockets winning by 20 points, 116-96.

I still enjoyed the game and the experience despite of the lopsided score. The organizers tried to generate more excitement for the crowd by coming up with several gimmicks in between quarters and during timeouts, like punting NBA merchandise for fans to scramble and fight over, or mascots gamboling about in the court to the delight of the spectators, and of course, the cheerleaders. I'm also happy that my brother (and his girlfriend) was able to see his first NBA game.


We spied several celebrities - basketball players from the local leagues and movie actors - on our way to the exit after the game, which is like a bonus. I was also impressed with the MOA Arena itself. The seats are comfortable (and ours has a nice perspective), and the venue is very modern.

How to Get There
The MOA Arena is located at the Mall of Asia complex, in the southern end of Epifanio delos Santos Avenue (EDSA), in Pasay City, Metro Manila.