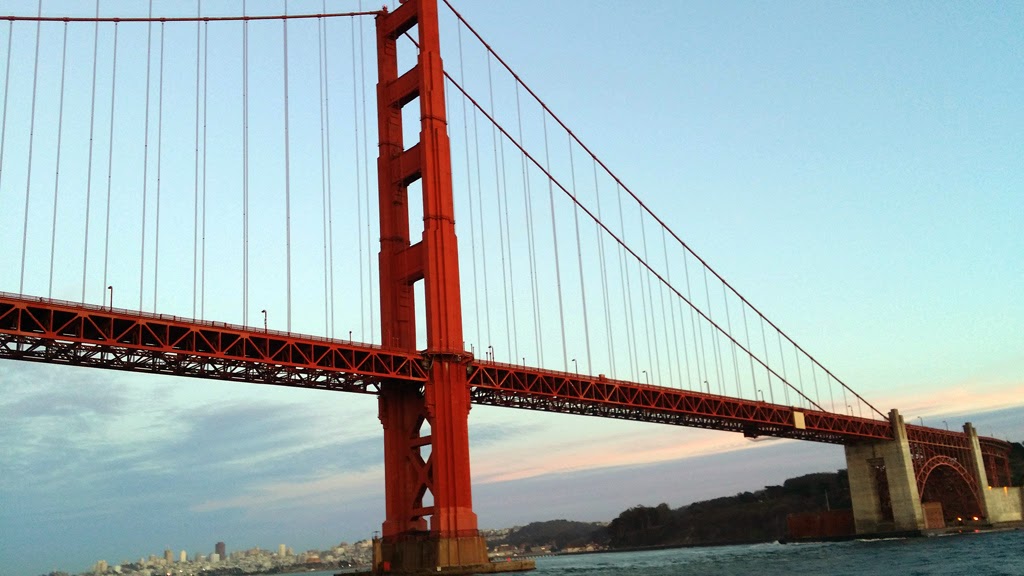 The cruise wasn't really planned. Originally I wanted to go to the Presidio, a park in San Francisco, so I can get a closer look at the iconic Golden Gate Bridge, but in my exploration of the city on my second day, I somehow ended up in the Fisherman's Wharf after taking the cable car. As I explored the wharf, I chanced upon the the red and white boat in Pier 43 1/2. I saw a billboard advertising a cruise around the bay, and upon checking, I was informed that they still have one more journey in late afternoon. I signed up, paid for the ticket and went around the wharf until 30 minutes before the voyage.

The boat was to sail around San Francisco Bay for about two hours, until sun down. I was kind of excited as I haven't been on a boat since Boracay, and it is my first time to take a boat in the United States too. I was in line to board the boat early, since I was already in the wharf, but it didn't take that long for us to get inside. Once I handed my ticket I was ushered in, and I picked one table in the main deck where I would sit. The red-and-white ship, called Royal Prince, set on the voyage shortly after everyone's got on board. Once underway I went up the upper deck where I can have a better view of San Francisco.

I was actually glad that I signed up for the cruise, as the city looked spectacular as viewed from the boat. As we exited the pier I saw the USS Pompanito, a WWII submarine moored on a dock,  as well as the schooners and the old ferryboats anchored in the maritime museum in Hyde Street pier. As we glide along the water, the city slowly receded, giving me a broader vista on which to admire it. I can see the Ghirardelli Square and the beach in front of it, and beyond it, the hills of the city dotted with Victorian-styled houses and shops. On my left, the pyramid-shaped Transamerica building figured prominently in the skyline, and as I look further on the left, the Bay Bridge and the city of Oakland. Seagulls, flying overhead, accompanied the boat as it trudged along the bay.

I alternated going up and down the main deck. I went below once they started receiving requests for refreshments, to get my bottle of Corona. I also got some food that they served on board, some sandwiches, cheeses and cured meats, and fruits.

Although I can see the view from the table where I'm at, I spent most of the time above the main deck. I soaked in the fresh cool air and the setting sun, with the salty spray of the sea touching my face. From a distance and getting nearer, was the red-orange Golden Gate bridge.

The Golden Gate Bridge was probably the most iconic symbol of San Francisco (that and the cable cars). The suspension bridge spans the channel between San Francisco Bay and the Pacific ocean, connecting the city to Marin County. The grandeur of the bridge became more apparent as we get closer, with the setting sun providing a picture-perfect backdrop behind it.

By this time the wind got a bit colder, and I was actually glad that I had my jacket on. I took some photos (and a selfie or two) of the bridge as we got a good view of it. The boat crossed under it just as the sun almost disappeared on the horizon, and made a U-turn back to the bay.

On the return trip I went down the main deck and continued with my dinner and beer, enjoying the dusk in the comforts of the ship. A folk singer was playing there when I got in, regaling the passengers with country music and small-town stories.

It started to get dark too, and we could only make out the dark outline of the infamous prison island of Alcatraz as we pass alongside it. We got as far as the Bay Bridge, then the boat made a turn again and went back to the pier.

Overall I enjoyed the cruise. The trip was a bit touristy, but for me it was one of the best way to get a great view of San Francisco and the Golden Gate Bridge. The dinner wasn't half bad too.

The boats that offer cruises around the bay are found in the piers near the Fisherman's Wharf. Pier 43 1/2 is located between Embarcadero and Taylor Street. You can take the Bay & Taylor cable car to get there.

Useful info
The Red and White sunset cruise departs at 5:30pm from Pier 43 1/2. Tickets cost $58 for adults, $40 for children. This includes the buffet dinner, plus a drink of your choice. They will also give you a coupon for a sundae redeemable in a Girardhelli store.