Flying in a Cessna 152 to Pinatubo 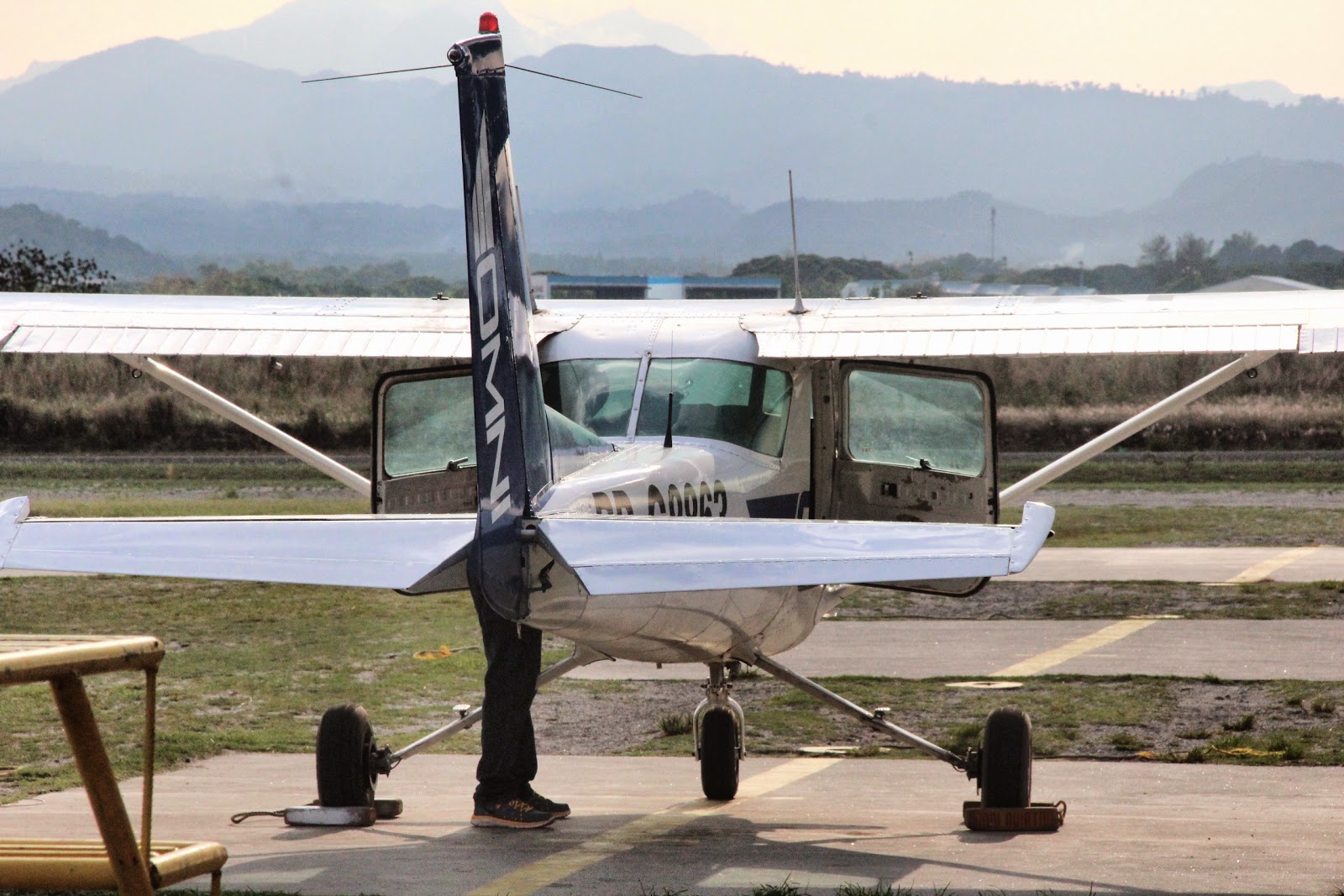 "I fly because it releases my mind from the tyranny of petty things..."

I had that quote by Antoine de Saint-Exupery, the author of The Little Prince, in mind as soon as I entered the small cockpit of the Cessna 152, a two-seater airplane that will take me over Mount Pinatubo, an active volcano in Central Philippines. Little did I know that I still to contend with another petty thing called "the weather" while I was up there in the sky.

Mount Pinatubo was always a fascination for me. Its 1991 eruption was the largest in the 20th century, wreaking havoc the surrounding areas, and causing ash to fall as far as Metro Manila. The ash and gases generated by the eruption blanketed the atmosphere and managed to delay global warming for several years, and the explosion was so violent that it blew a large portion of the volcano, creating a beautiful crater lake. I've been to the crater lake once, and I wanted to explore it again. This time though, I wanted to do it from the sky, and by doing so, hitting two birds I like in one stone: volcanos and flying.

I had the chance to stay in Angeles, Pampanga (where I also flew in an ultralight before) for a few days when I attended a Toastmasters conference in Clark Freeport during the Labor Day weekend. Between the sessions, I slipped from the conference venue and went to Omni Aviation, a flying school located at the periphery of the Clark International Airport. Aside from teaching pilots, Omni also offers aerial tours over Mount Pinatubo, and I signed up for one just before arriving in Clark.

The appointed date was Friday, at four in the afternoon. I arrived about half an hour early, and I proceeded immediately to the flight ops. A pilot and a plane was assigned, and I waited for them to finish the pre-flight check walking around the tarmac taking pictures of small planes being tended in the apron.


After the pre-flight checks were down I was introduced to Alfred , my pilot. We exchanged pleasantries while I was ushered to the plane. The aircraft, as mentioned, was a Cessna 152. It's a two-seater with a tricycle landing gear and 110-horsepower Lycoming engine. It felt cramped as I entered, but we both fit right in just as well. I put on the seat belts and my headset, and soon I hear the cackle of air traffic controllers from the nearby Clark airport directing traffic over the airspace above us. This is my first time to fly in a small aircraft like this, not counting the ultralights.


After a few minutes of waiting and some general instructions, we were given the permission to take off. At this point the horizon started to get overcast, giving some sort of foreboding of things to come, weather-wise at least. We taxied to the runway, one of the shortest in the Philippines, and took off shortly after.


The view opened up as we climbed in altitude, giving me a birds-eye view of the nearby airport/airbase and the surrounding city. We continued gaining altitude, flying over the airport and then the racetracks, until we were above the Centennial complex in the freeport. We flew over it, circling overhead for a better view of the area. After making several passes, we proceeded in the direction of Mt. Pinatubo.

While flying over the lahar fields (lahar are pyroclastic materials  spewed off by the eruption), a thick cloud cover descended over the mountain range where Pinatubo is located. At some point we could see nothing but thick clouds, with the occasional glimpses of what's below us. Alfred asked the air traffic control permission to climb another thousand feet, but the situation was still the same. I guess Saint-Exupery was wrong, we still would have to deal with petty things like "the weather" while flying.

As he wanted to err on the side of caution, Alfred decided to turn back and abort the flight over the volcano. Seeing my sad face he attempted to take a longer route but was forced to turn back for the final time as the clouds got thicker and started raining. We headed back towards the Centennial complex, disappointment visible from my face, which I didn't really hide from the pilot. Perhaps to bring my excitement back again, he handed me the controls and taught me how to bank, turn directions and go up or down using the controls. It was as fun as it going to get.

I spent several minutes controlling the plane, doing turns and changing pitch and yaw, all while clumsily positioning my phone to take a selfie at 6,000 feet. The weather was surely not improving at this point, and Alfred called the ATC again, requesting permission to go back and land. The radio squawked several more times confirming and granting his request, and we headed back to the airfield.

We landed and taxied to the apron, with the pilot apologizing profusely for not able to take me over the volcano crater. I just shrugged as there would be no point in complaining; force majure was written all over it. Big drops of rain started to pour just a few minutes after we came to a full stop. As we hurried back to the flight ops building, I can't help  muttering under my breath choice words about Saint-Exupery and his "petty things."


How to Get There
Omni Aviation is located along Roxas Avenue in the Clark Freeport Zone. You can take a jeepney from the main gate to get there. Just tell the driver to drop you off in Omni.

Useful Info
The Pinatubo tour is available everyday, depending on the weather (as I learned). You can just call them a day or two before to schedule your flight. The best times to do it are in the mornings or late afternoons, during the dry season. It costs PhP 6,000 per person, with the flight lasting about 45 minutes (basically you hired the plane and the pilot).