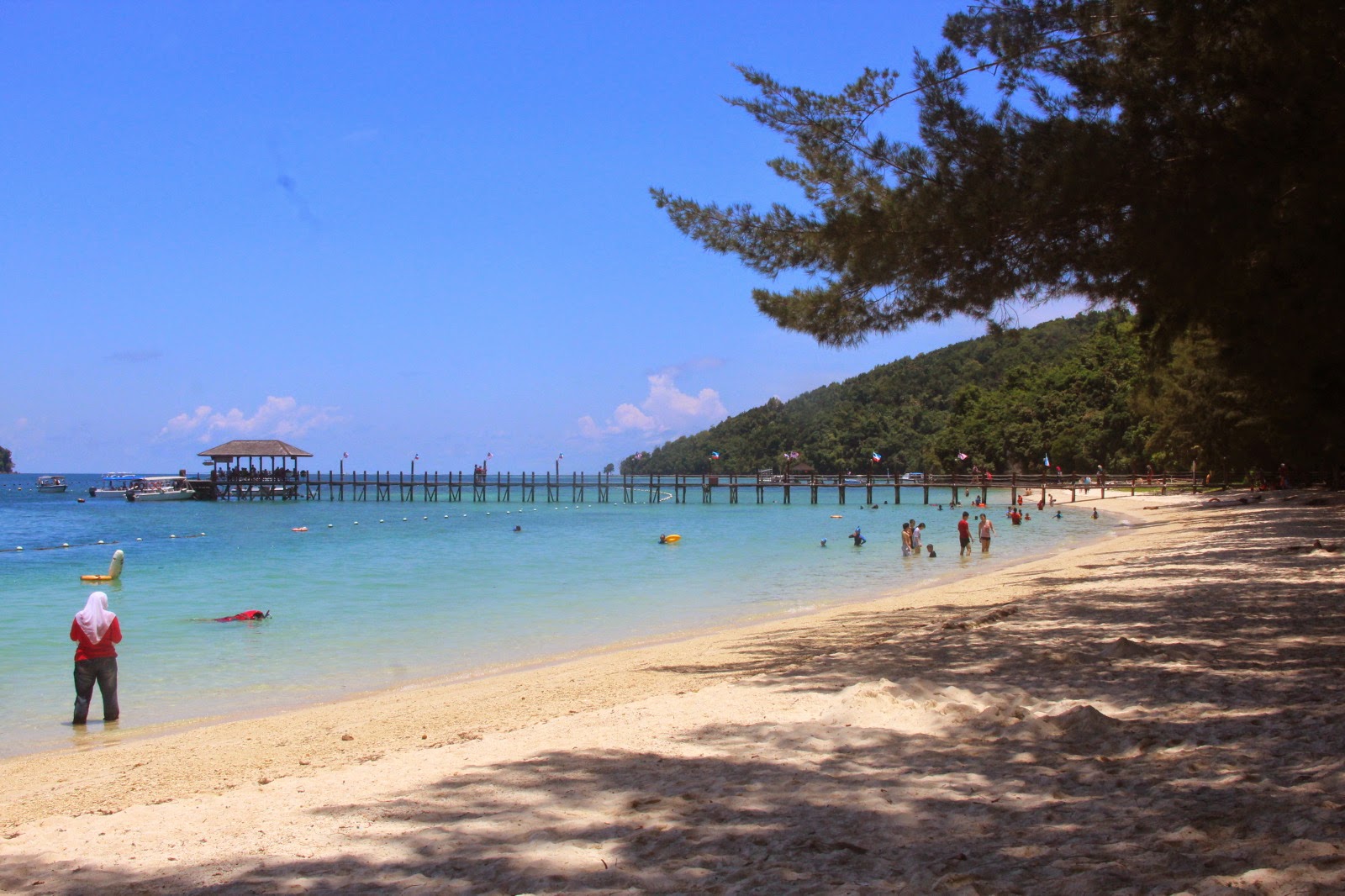 It wasn't the most impressive of beaches - the sand is not as white or powdery as Boracay's, or as picturesque as Banol beach of Coron or even Langkawi. At best it's at par with the beaches of Batangas, only cleaner. But a beach is a beach, and I like to visit one if there's one nearby. So it's a no-brainer for us to include beach bumming during the trip to Kota Kinabalu. We picked one just across the city, at an island called Pulau Manukan.

The day trip started early morning at the Jesselton port (Jesselton was the old name of Kota Kinabalu) where we boarded a small launch that will take us to the island. The boat - quite zippy compared to the motorized bancas that we're used to in the Philippines - made a detour at another island to bring some passengers there before docking at a small jetty that juts out from the beach of Pulau Manukan.


We alighted from the boat and went straight to the beach, passing through the visitor center and a small courtyard. I noticed that the island has nicer facilities than most beaches in the Philippines - there's a lunch area (with a canteen that serves cheap, great-tasting nasi goreng), several lifeguard stations along the beach, and even payphones.  We had a late breakfast of nasi goreng and red Mountain Dew, then went on to find a good spot along the beach to sit back and enjoy the view.

There were a moderate number of visitors on the island when we came, a few groups of loud mainland Chinese, several Caucasians and some locals. There were other Filipinos too, a couple actually stopped by to chat with us. I didn't go in the water to swim right away, rather I just plopped down on my mat and watch the world go round from the beach.

Aroma invited me to explore the rest of the island. We cut through the middle of the island and ended up on the other side. The beach here is rocky, and only a handful of people around. We went down along the rocks, but stopped short when they became too slippery or too painful to walk on because of the small barnacles and mollusks covering them. We circled the island from there and went back to our place on the beach, where Sigrid, Randy and James are taking selfies and making animated conversation.

I decided to swim when it was way past noon (I think I haven't recovered from my sunburn during the surfing trip a fortnight before). The water is surprisingly cool, and I didn't detect any telltale stings from jellyfishes (the boatman mentioned that jellyfishes may be a concern), so that was a good sign too. We went back to the city just before sunset, and just a few minutes before the rain started pouring down. 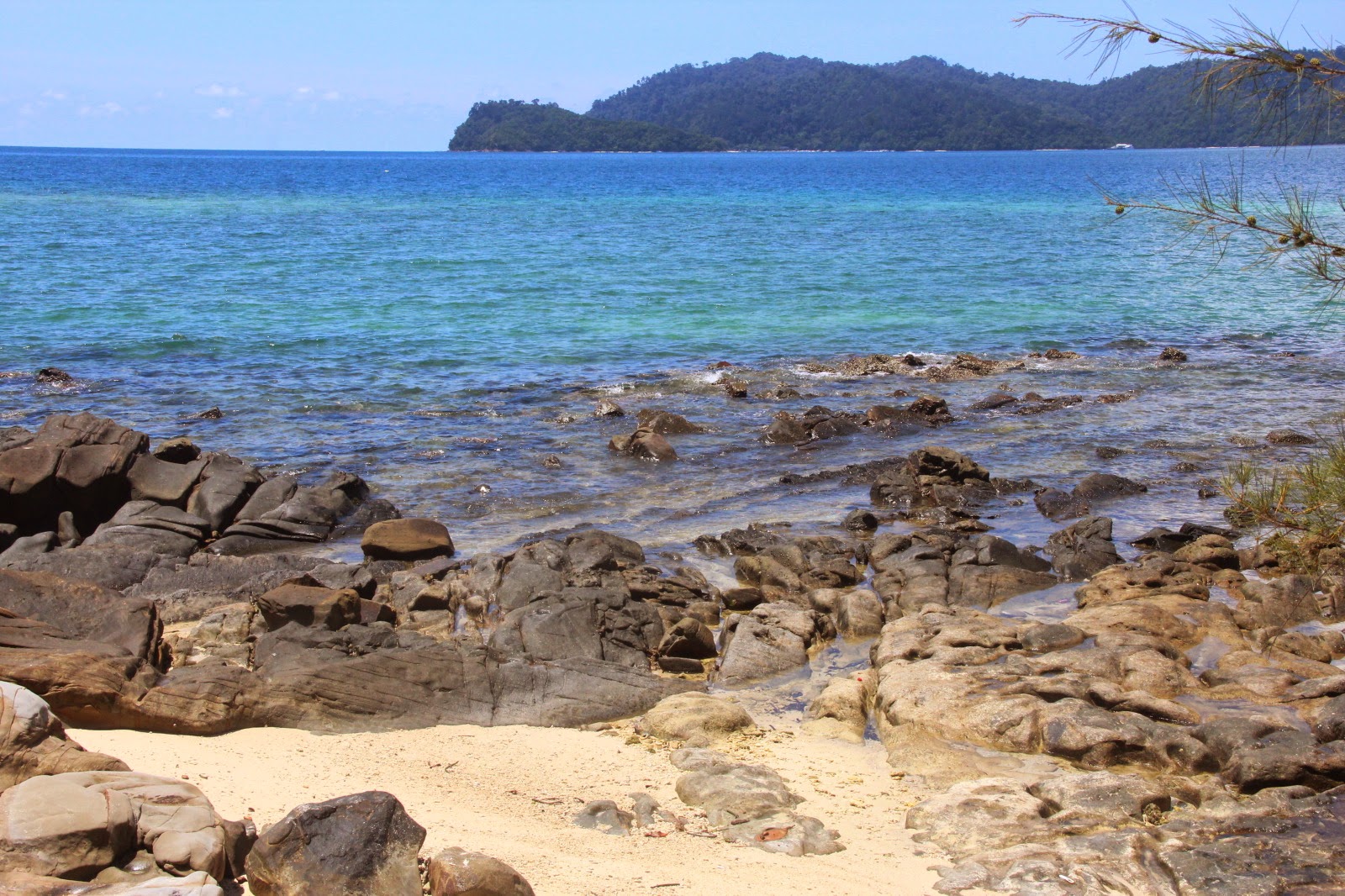 Pulau Manukan is located about 20 minutes from Jesselton port in Kota Kinabalu, Malaysia. It is accessible by boats plying from the port. The fare is about 30RM per person. Trips start at around 7 am going in, and about 4 or 5pm going back. You have to tell the boat company when you want to be picked up.

You can rent masks, snorkel and fins from the boat company if you want to go snorkeling at the island. It will set you back around 10-15RM for the rental. You can also rent a beach mat when you get there. You don't have to bring any food or refreshments, as there is a canteen in the island that sells food and drinks.

Box jellyfishes are said to be a problem during the summer, so watch out for those nasty things.
beaches islands Kota Kinabalu Malaysia Pulau Manukan Sabah