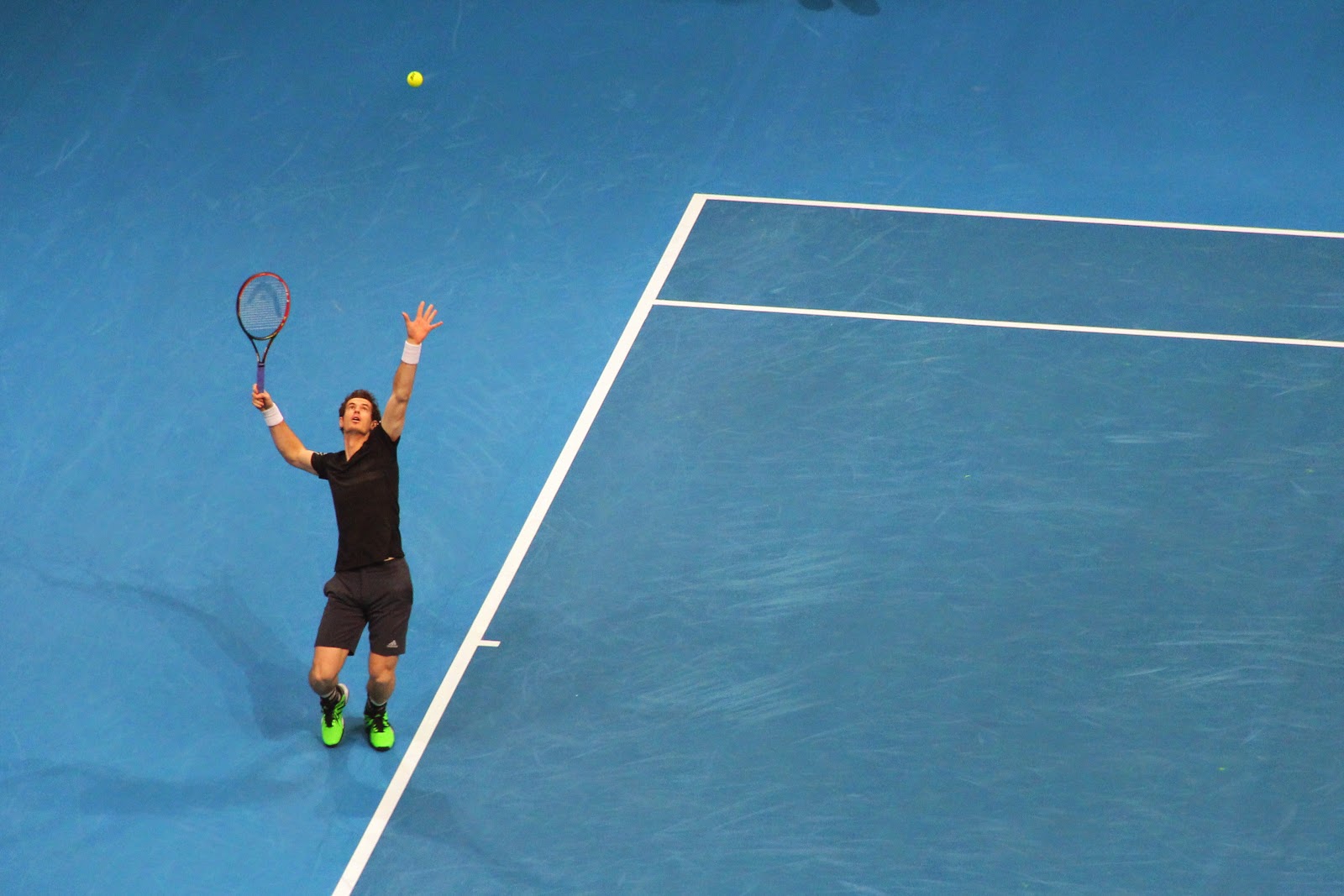 I'm still over the moon a day after the International Premier Tennis League event and I figured I'd blog it for posterity.  Tennis is one of the sports that I follow, which started since I saw Martina Hingis play on TV (football is the other, especially Real Madrid). So it's no surprise that I jumped at the chance and bought my 3-day pass to the IPTL event to be held in the MOA Arena in Manila.


Right at the heels of the regular professional tennis tour, the league is a new, faster format that the regular tennis tournaments conducted by ATP and WTA. The team tennis tournament is composed of four teams based in cities in Asia: Manila Mavericks, Singapore Slammers, Indian Aces and UAE Royals. There was plenty of star power, both active and retired, who went to compete in the inaugural Manila leg: Maria Sharapova, Andy Murray, Jo-Wilfred Tsonga, Ana Ivanovic, Goran Ivanisevic, Pat Rafter, among others. The Philippines' own Treat Huey is in town too, designated as the Mavericks coach and playing in the men's doubles.


The event was slated for three days but I skipped the Friday session because of work. Still I got a lot of excitement from the two days that I've watched the event.

There were two matches between four teams for each day. The first session of second Day pitted the Royals against the Slammers, and the Mavericks versus the Aces in the evening session. Five games are played on each match: a men's legends, men's singles, ladies singles, a mixed doubles and men's doubles.


I was able to catch Kristina Mldenovic battling past Daniela Hantuchova when I came in arena, then Nenad Zimonjic and Marin Cilic versus Tomas Berdych and NIck Kyrgios in the doubles. In the second session I supported the Mavericks mostly throughtout the night: Murray against Gail Monfils, then Murray/Sharapova vs Sanja Mirza and Rohan Boppana in the mixed. I did cheer for Ana Ivanovic when she was in the singles match against Sharapova, who is playing for Mavericks. I actually enjoyed the new, fast-paced format of the games, and glad to see so many tennis greats all in one place at the same time.


The third day brought more surprises. In the first session, Ivanovic played Mladenovic in the ladies singles, then it was Marin Cilic, who recently won the US Open, against Monfils. Joining the Manila team was Mark "Scud" Philippousis, who played a legends match against another Aussie, Patrick Rafter. It was followed by Treat Huey and Tsonga in the men's doubles, playing against the Slammers' Tomas Berdych and Lleyton Hewitt. The crowd was so worked up at this point as the Mavericks were leading by 2 games. Then it was an entertaining mixed doubles match between Murray and Kristin Flipkens against the world number one Serena Williams and Lleyton Hewitt. The Mavericks again won. It was a different story in the ladies singles, as Serena virtually conducted a tennis clinic against a hapless Flipkens, giving the Slammers one win for 3-1.


It was in Murray's shoulders to close it out for the Mavericks, and the match against Kyrgios, the conqueror of Rafael Nadal in Wimbledon, was just as thrilling as it would be if they were playing in the regular Tour. The score got to 5-5, from which there would be a 5-minute shootout, where basically, who gets the most points at the end of 5 minutes wins the game. Murray, to the delight of the home crowd, won it. My voice was hoarse for shouting so much during the game.

I know that the results of the matches here have no bearing with the ranking on the regular tour, but I am glad to witness this event, and happy that it was held in Manila. It's about time that the city gets to host events like this, in the heels of the NBA pre-season game last year, and the exhibition football match between the LA Galaxy and the Philippine Azkals the year before that. And I'd say, more, please.

For now, the IPTL continues on to Singapore, then New Delhi and then to Dubai. You can follow the league here www.iptlworld.com.