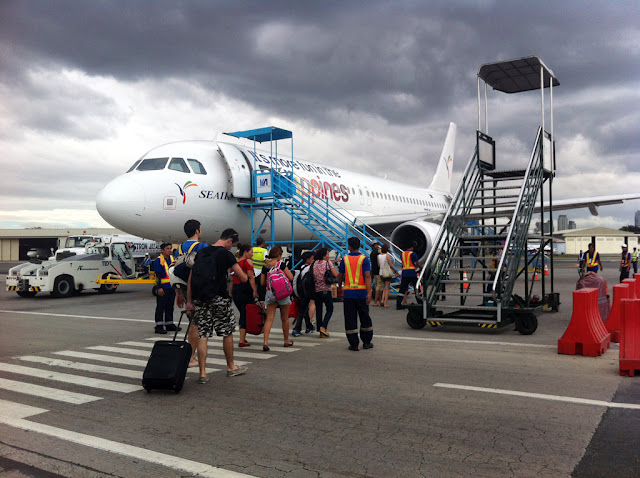 I haven't flown with Seair before, so when it was suggested that we take the airline to Kalibo (going to Boracay eventually) , I gladly said, yes.

Southeast Asian Airlines, as it is formally called, was formed in 1995. The carried used to operate as a boutique airline, operating small planes such as LET L-410 and Dornier 328s between destinations such as Caticlan, El Nido, and Batanes. Now it has taken the low-cost carrier route, operating Airbus A320s and 319s on lease from Tiger Airways (my review of Tiger Airways here). The latter also owns 40% of the airline.

Booking and Price
As Seair is partly owned by Tiger Airways and has a marketing tie-up with it, bookings for Seair are done through Tiger Airway's website.

The price was reasonable. We got a roundtip ticket to Kalibo from Manila for about PhP3,300, booking it 5 months in advance. There were several added fees that jacked up the ticket price though: VAT, security fee, and service fees.

There were also optional ancillary fees, such as priority boarding (PhP168), seat selection (PhP240 for the coveted exit row seats), flight insurance, and Switch My flight, which for a certain fee, allows you to change your flight date and time for an unlimited time.

The electronic copies of the ticket were sent via email. There is no web check-in yet.


The cabin was spartan. The faux-leather seats on the Airbus 320 were arranged on a 3x3 layout, typical for budget airlines. I find the legroom a bit narrow. If you're a big person better shell out some dough and get an exit row seat for your comfort.

Food and drinks are sold on board. Hot meals are only available on international flights, but you can get a sandwich or pastry for about a hudred pesos, and you can pair them with beer, fruit juices or sodas.

Seair also sells other products on board, such as handcrafted bags, artisanal toiletries, and souvenir items.

I know that Seair has an inflight magazine but I did not see any during the flight.


Between October, when we booked the tickets, and February, the month of our flight, numerous changes were made to our scheduled flight times. I think there were at least three changes. I did not really mind because our schedule was kind of flexible but it would have been a bummer if it wasn't. The changes were announced to us via email, which required us to click on something to signify our assent.

We boarded the flight to Kalibo on time. There wasn't a lot of passengers in the flight so we got settled in no time. We also arrived on time in Kalibo.

The flight back was a bit of a doozy, as the flight was delayed for more than an hour. The plane from Manila which supposedly will take us back arrived late.

Seair flies to eight domestic destinations, and to four international ones. in Manila, flights depart from NAIA Terminal 4 (previously called the Domestic Terminal)