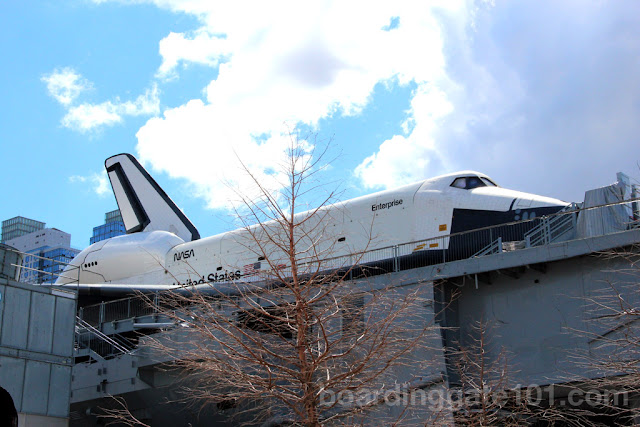 Space shuttles are fascinating vehicles. Part airplane, part rocket, the winged spacecraft was designed to be launched vertically but will land like an airplane. It is also reusable. Like the Concorde, images of the space shuttles launching into orbit form contributed to my fascination with flying, spaceships and astronomy.

The first one to be built was the Space Shuttle Enterprise, now on display at the Intrepid Sea Air & Space Museum in New York. The name Enterprise was a homage to a fictional spaceship, Starship Enterprise from the TV show Star Trek.


Although it did not go to space, nor capable of going there, the Enterprise was used for test flights in the atmosphere. It first flew in 1977, hitched on the back of Shuttle Carrier aircraft, a modified 747. The SCA would release the Enterprise in the atmosphere and the shuttle would fly, glide and land as part of the testing process. When all the testing are done, the data they got was used to enhance the construction of the rest of the shuttle fleet, which include Columbia, Challenger, Discovery, Atlantis and Endeavour.

The Enterprise was retired in 1985. It was meant to be retrofitted as a replacement to Challenger after the 1986 disaster, but NASA built Endeavor instead. The shuttle became part of the Smithsonian Institution until 2011, when it was transferred to the Intrepid Museum. It was flown to New York on April 2012 and became part of the display.

The shuttle was damaged when Hurricane Sandy barged through the East Coast last October, and the pavilion housing the Shuttle was closed when I visited the museum. Enterprise can still be see at the deck of the aircraft carrier though. A good vantage point is looking up from where the Concorde is displayed.The pavilion will open again in summer 2013.

Despite of that minor setback I was still able to see several items related to Enterprise and the space shuttle program inside the Intrepid. There is a section there that displayed the actual wind-tunnel models of the shuttle, plus other parts and memorabilia related to the shuttle.

The Intrepid Sea, Air and Space Museum is located at Pier 86 on Manhattan's west side, on 12th Avenue and 46th Street. You can take the subway to 42nd Street and walk or take a M42 bus to 12th Avenue. The shuttle is on the flight deck of the aircraft carrier, but it will have its own pavilion eventually. The shuttle memorabilia is in the hangar deck section.