In Pictures: Museum of Comparative Zoology 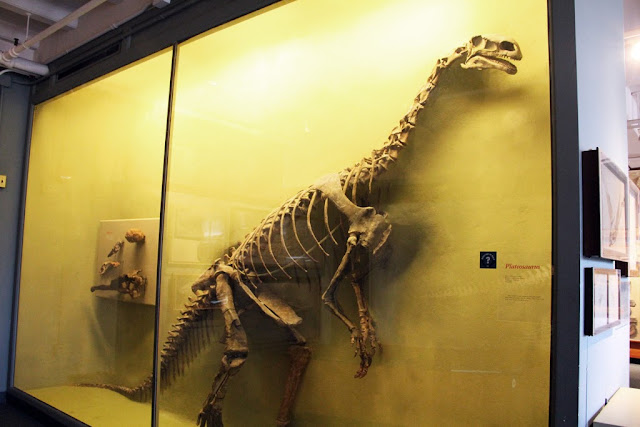 Located inside the grounds of Harvard University in Cambridge, Massachusetts, the museum has about 21 million specimen collected over the years, including samples gathered by Charles Darwin, George Washington and Captain Cook [1]. I visited the museum with my friends Joan and Ian during my trip to Cambridge last winter, and we'll revisit it again in this week's In Pictures.

As mentioned in my previous post, the museum's main draw is the 50-foot skeleton of a carnivorous reptile called kronosaur. However impressive the kronosaur's size is, it is not a dinosaur, but rather a relative to the modern lizard.

Located in the same room as the kronosaur are a slew of other ancient monsters, including the preserved specimen of a coelacanth, an ancient specie of fish thought to have been extinct millions of years ago.

Also in the room is the fossilized head of a triceratops, a herbivorous dinosaur. There's also a skeleton of a edaphosaurus, a plant-eating tetrapod with a dorsal sail on its back, making it look like a bad-ass vegetarian. There's also a plateosaurus, a long-necked Triassic-era dinosaur (pic above).

Another impressive specimen on display is the eight-foot long turtle shell, the largest to be found so far. I think my torso would easily fit inside its cavity.

There were a great number of mammals as well, include a skeleton of a mastodon,  an extinct animal related to elephants. They went the way of the dodo about 11,000 years ago, due to climate change. I learned later that the name 'mastodon' means "nipple tooth," on the account of the shape of its teeth's cusps (seriously, who names these things?).

Moving away from the bones of ancient monsters I found myself in a section with hundreds of stuffed animals, including a wolf and a tiger. There's also a section for birds, fishes and other marine animals, another for rodents and vermin, and one for stuffed bats.

Hanged overhead are skeletons of marine mammals, including a narwhal, and several whales. One skeleton even has baleen still attached on it. The museum staff manning that section has plenty of interesting stories about the whales on display, I was glad that we chatted her up.

How to get There
The Harvard Museum of Natural History is located at 26 Oxford St., Cambridge, Massachusetts,  just near Harvard Yard. You may take the Red Line train from Boston to get here.

Useful Info
The museum is open daily, except Christmas, New Year, and Thanksgiving, from 9am to 5pm. Admission is $12 for adults, $8 for children, and $10 for non-Harvard students. Price includes admission to the Peabody Museum of Archaeology and Ethnology. The gift shop is located at the second floor near the entrance.