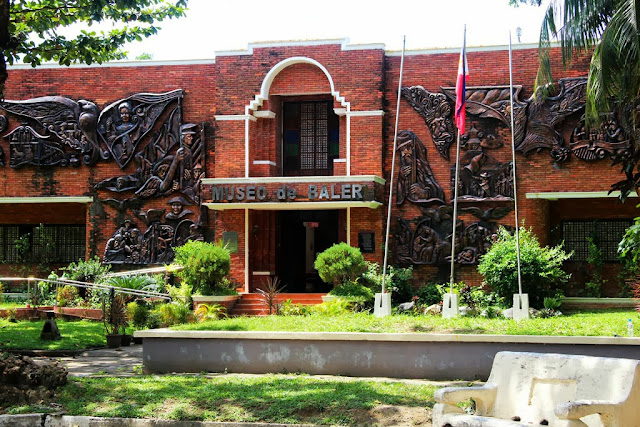 After you're done surfing, or trekking to a waterfall to cool down, or climbing the 600-year old balete tree, there are other interesting things to see and do in and around the town of Baler. The first choice would be just to laze around the beach, but you can also get to know the history of the town as an alternative, by visiting the town museum.

The town museum, imaginatively called Museo de Baler, is right in the town center. Housed in a two-story rust-colored building, the museum is adorned with a mural on its facade that gave a preview of the town's colorful history, dating back from the 17th century to the present.

We arrived at the museum just after lunch. The entrance is free but it is recommended to give a small amount as donation. There weren't a lot of people inside when we enter. At the threshold is another mural showing the different period of the town's history covered by the museum's collection.

The first section is an exhibit that gave tribute to the contributions of the Franciscan friars who came to town as missionaries in 1609. On exhibit are centuries-old books and other memorabilia from the mission over the years, such as prayer books, letters, and other documents, like population registries of the Aeta aborigines who lived in the vicinity.

Items from the old churches were also displayed, such as old bells, and items used in the celebration of the mass. Within these exhibits are memorabilia collected from the production of a (Philippine) movie that uses the town as a setting.

As a history student what I found most interesting are the artifacts recovered in shipwrecks found around Luzon and Palawan. During the Spanish times, a trade route, called the Manila Galleon, was established between Manila and  Acapulco. The ships, laden with products from the East, sailed the Pacific Ocean to deliver goods between the two Spanish colonies.

The shipwrecks - one in Lena Shoal, and the ships San Diego, Sta. Cruz and Española  yielded several Ming dynasty items that were prized in Europe during those times, including dishes and ceramic jars.

There were also artifacts on display that were dug up locally, such as a 17th century bowl found in Julio site in Sabang, Baler.

An exhibit on the second floor - called Meridian World - displays photographs taken during a voyage undertaken in 2010 by the galleon replica ship Andalucia.  The ship sailed from Spain to the Philippines and China, retracing the ancient trade route that made Manila a global city and a center for trade.

Aside from the Galleon Trade, there were other interesting stuff in the museum, such as those relating to Manuel Quezon, the wartime president of the Philippines who was born in Baler. His presidential car - a 1937 Chrysler Airflow - was on display at a separate building outside the  museum.

Also on display were paintings of prominent personalities involved during the Siege of Baler, in which local revolutionaries laid an eleven-month siege against Spanish trooped holed inside a fortified church in Baler in 1898.

How to Get There
The Museo of Baler is located in the town center. Just ask a tricycle driver to bring you there from your hotel or from the bus station (you may call Anthony, the one we hired for the day, at 0930.479.8828).